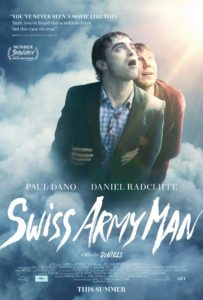 We’ve all had magical friends. In films from The Third Man to The Shining, characters have been befriended by jolly but questionably real companions. These semi-illusory compadres help our films’ heroes overcome social challenges so that they might regain full access to the comforts of community.

Swiss Army Man both is and isn’t that kind of film.

In it, Paul Dano plays Hank, a castaway at the end of his rope. Onto Hank’s wee island beach washes the corpse of Manny — as gleefully performed by Daniel Radcliff (and some Radcliff-resembling dummies). Manny becomes Hank’s magical friend, evidencing strange biological powers. These powers help the pair escape the island and — to a curious and curiouser extent — regain access to the world at large.

Basically Manny has a ton of gas. Farts, I believe, is what kids today call them. 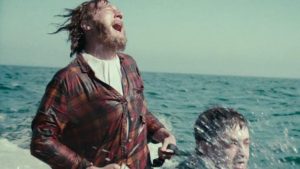 Hank uses Manny’s decomposition-born flatulence to ride Manny like a jet-ski. This is the film’s opening, and best, sequence. It is a preposterous, glorious, startling scene that loudly (ahem) proclaims that Swiss Army Man isn’t going to bother with the typical.

From there, alas, Swiss Army Man doesn’t much bother with much beyond whimsy, and whimsy that is deliberately gross at that.

Can one have gross whimsy? Let’s say that one can. 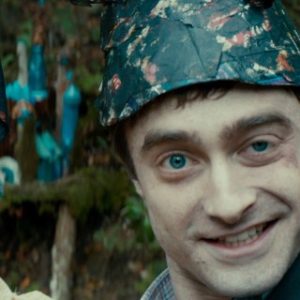 In this grossly whimsical picture Manny may or may not come to half-life, the truth residing in your interpretation of Hank’s mental state. The pair may or may not re-enact the unrequited romance Hank longs to actualize between himself and some lass he’s spotted on the bus (Mary Elizabeth Winstead; mostly just photos on Hank’s battery-challenged phone).

What, you may reasonably inquire, is going on here? 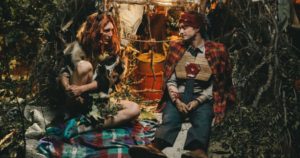 Look. I’ll be frank. What’s going on here is not quantifiable or codifiable. While Swiss Army Man starts strong and ends strong, the whole middle section is just a goofy lark. Ninety percent of the film consists of conversations between a loon and a corpse, covering topics that don’t clearly correlate to anything of much interest. That said, the pair of leads — Dano and Radcliff — are both excellent. Even though Radcliff does little more than pull faces (and fart), I found his performance particularly impressive. And funny. 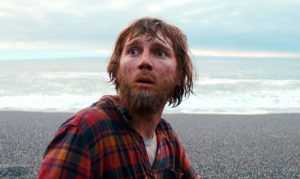 Dano, in turn, can handle acting the loon with the best of them. So watching Swiss Army Man is amusing — just not particularly compelling.

If you’ve seen any of the aforementioned magical friend films or any of the many many others — Pete’s Dragon, Terminator 2: Judgment Day, Harvey — you’ll know what to expect come the film’s close. Hank and Manny should find their way out of the forest once Hank’s social challenges have been mitigated, and Manny will then bid a tearful goodbye at the woods’ edge so the community won’t be forced to challenge their assumptions about magic friends; i.e. that they don’t exist. 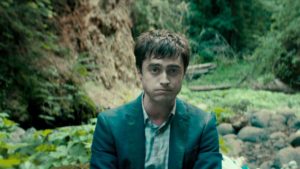 Swiss Army Man both is and isn’t that film. Hank really is crazy. He never tells us why or how he ended up on his deserted island — something about a boat is all he mumbles — and the island likely never existed anyway. Crazy, right?

Manny, though — Manny is as real as anything in the film. A real corpse that a real loon has been dragging around the narrow strip of gullies and trees that separates some married woman’s home from the Pacific, in the purely logical hopes that, in doing so, he will somehow win her love.

That’s the funniest part of Swiss Army Man. And it’s also the end, if you don’t mind reading about how the film ends.

If you do: sorry. Too late.

Hank does stumble forth from the woods to fall at the feet of his love, but he still can’t speak to her. Hank gets quickly revealed — by himself, proudly — as a psychotic. He’s chased back into the woods so his disturbed and confused love object, the cops, and a TV news crew can find the Gondry-esque tableaus he really did build, with a flatulent corpse, to, uh, try to meet someone he’s been stalking.

I don’t think so. I think I gave you the tools one needs to watch it and with which one might care that one did. Which tools, they may come packaged with the film, only folded up and tucked away. When you watch Swiss Army Man and you reach for those tools, pretty much all you’ll get ahold of is corkscrew.

Or that’s what I got whenever I tried to pull the thing open and make good use of it. 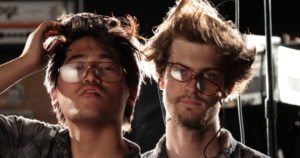 Swiss Army Man is directed by Daniels — as in two guys named Daniel (Kwan and Scheinert) who go by ‘Daniels,’ because, fuck, I don’t know, they’re millennials? They’ve made a lot of music videos which I understand are impressive, but since I stopped watching music videos when MTV switched over to reality television, I really wouldn’t know.

Visually, Swiss Army Man is a bunch of fun. It’s full of ideas and larks and tangents and is, generally, a goofball mess. Watching it, I was reminded of Detention — another film by and for millennials that wasn’t what I expected a film to be.

Not my cup of corpse spit, we’ll say.

Does that make Swiss Army Man a failure? I’m going with no. Didn’t love it. Didn’t hate it. Didn’t much understand what the Daniels were trying to do besides have fun — and likely that’s all they had in mind.

It is, after all, a film about a flatulent corpse. And probably the best one I’ll see all year.