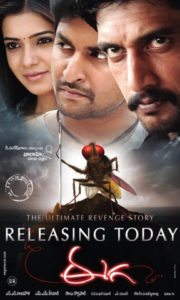 Sometimes you see a film that is so perfectly inspired and insipid that you are forced to eat your own shirt. The film Eega (aka Naan Ee aka Makkhi) is such a film.

I cannot recall how this film made it onto my Netflix queue but boy howdy am I glad it did. I needed a new shirt and I was sort of hungry.

Regardless of which language you watch it in — it was filmed simultaneously in Telugu and Tamil and dubbed in Hindi and others — its title translates to “Fly” or “I, Housefly”. If that makes you think of Vincent Price or David Cronenberg, you should think again, preferably after gargling Baz Luhrmann. And I mean all of Baz Luhrmann, from his cinematic output to his spleen. This is a film so over the top that you’ll need to pack your own oxygen.

The story, such that it matters, is brilliantly imbecilic. A father tells a bedtime story to his daughter. That story is about a young guy, Nani (played by Nani aka Naveen Babu Ghanta) who has one of those all-consuming only-in-Indian-films crushes on his comely neighbor, Bindu (Samantha Ruth Prabhu). Except OH NOES! A dastardly — and I do mean dastardly — developer, Sudeep (Sudeep Sanjeev), must have Bindu. Why? Shut up, that’s why.

I am the villain. Here is my shotgun.

Sudeep is a cold-hearted scoundrel who will stop at nothing to get what he wants, regardless of what he happens to want: a fetching girl, some refreshing limeade, a half-hour in a sweatbox, or a bucket full of dead flies. No matter what’s happening in any given scene, Sudeep Sanjeev ratchets up the melodrama to such brittle levels that you fear his eyebrows will splinter off his face and kill a room full of school children with the shrapnel.

Anyway, Sudeep kills Nani so he can make the moves on Bindu. The end.

The end, except, this being a film from South Asia, Nani gets reincarnated so he can both avenge his death and protect his love. 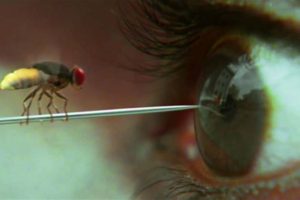 He gets reincarnated as a housefly. Maybe you saw that one coming but:

In Eega, the effects are wonky and there are way too many of them. The acting is hyperinflated and comical. The scenario is seriously haphazard. And yet. Yet.

Eega is kind of genius. It’s an Andy Kaufman kind of genius, singing along to a 45 of the Mighty Mouse theme. It’s the kind of genius you roll your eyes at, and scoff at, but — also — uncontrollably, counter-intuitively admire. It is Home Alone meets something Michael Bay barfed up after eating some chicken he found on the street with a dash of Looney Tunes, too.

We are in love. What could go wrong?

The film’s concept is as good as they come. It gives a rote plot an absurd twist, one that I’m sure piques your interest, being as fly-focused as you are. Secondly, it commits fully, one of the key requirements for comedy (and insanity). Nani-as-fly doesn’t just set out to irritate Sudeep, although that is phase one. He is going to kill him and he’s going to win back Bindu.

Written by veteran screenwriter K. V. Vijayendra Prasad and directed by Prasad’s son, S. S. Rajamouli, Eega finds topsy-turvy creative chaos around every corner. While it sticks to genre beats, that only accentuates how fucking nuts the film is. You might get bored watching an out-matched suitor fight for his one true love if he was a nebbishy simp, but watching him do so as a fly is jaw-droppingly audacious.

Which is not to say that Eega is good, exactly. It’s more that it’s preposterously silly. It legs its goofy premise to the point of no return and far far far beyond. In Eega, Nani’s state of flyhood is only an irrelevant impediment to his goals.

In a million years I would not have thought up having a fly work out inside a lightbulb.

Eega does not overly concern itself with logic, but that should be no surprise. It is not reflecting on real life. It is a story, told to a child, about a vengeful insect and the woman who loves him.

Naturally, I hope someone remakes it in English and releases it as Buzzkill! Perhaps Broken Lizard needs a project post-Super Troopers 2? Maybe David Wain and Michael Showalter have the right absurdist touch?

It’s hard to imagine Eega being improved upon, however. It is a Jenga-tower of nutsy-cuckoo. One wrong move and the whole thing would collapse. But challenge doesn’t frighten us. We just watched a fly kick ass and we are feeling inspired.

2 responses on “Buzzkill! (Or: What I’d Call My Remake of the Fly-Revenge Film Eega)”