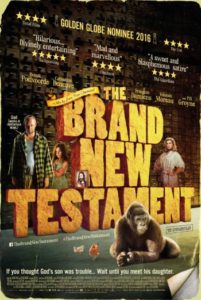 If you’ve ever read the Bible, you’ve no doubt pictured God as a mean, bitter, unshaven jerk in a bathrobe laughing at the misfortunes of his creation, daily thinking up new and horrible rules of existence, insulting his wife, and mocking his dumb son Jesus for getting nailed to a piece of wood. Whether or not you imagine God is Belgian likely depends on your nationality.

Writer/director Jaco Van Dormael is Belgian, so in his new (to the U.S., at least) movie, The Brand New Testament, God (Benoît Poelvoorde) is too. He lives in a ratty apartment much like yours, aside from the one room stacked with infinitely tall filing cabinets and a lone computer, circa 1991, on which he works his nasty little miracles and torments humankind.

His meek wife, the Goddess (Yolande Moreau), does little but obsess over her baseball card collection.

His ten year old daughter, Ea (Pili Groyne), hates him. The Brand New Testament is her story, and indeed, her testament. She narrates this story of escape and new beginnings. 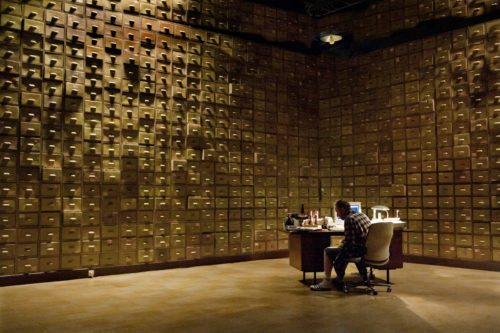 She begins by talking to her brother, Jesus, who exists only as a six inch tall statue. He advises her to get some apostles, work a miracle or two, and write up a testament. Twelve apostles were a lot to handle, so he suggests sticking to six.

The last Van Dormael movie I saw was the somewhat epic Mr. Nobody, and Van Dormael’s obsessions haven’t changed. What he’s most fascinated by are the lives of ordinary people. Mr. Nobody through its structure of branching possibilities explored lives by the boatload. In The Brand New Testament, he stick mainly to the six apostles Ea finds on her journey.

These apostles include a sad, one-armed beauty, an older woman (Catherine Deneuve, no less) who eventually shacks up with a kindly gorilla (don’t ask), a potential serial killer, a ten year old boy who wants to be a girl, a sad man obsessed with naked women, and an office drone who wants to see the world. Also on hand, an old bum who writes down what each of the six have to say about themselves, because the brand new testament isn’t about Ea, it’s about the people she meets. 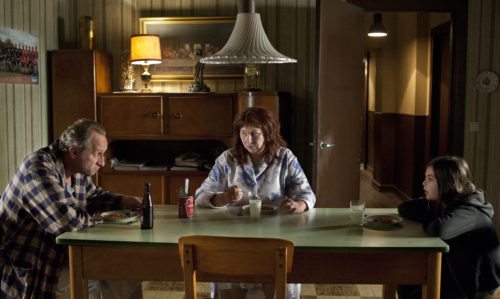 Dinner with ma and pa.

Van Dormael throws another wrench into the works by having Ea sabotage dad’s computer before starting her journey. In so doing, she releases the Death Dates. That is, everyone on earth receives a text message telling them exactly how long they have left to live. God is outraged. How to maintain the sense of doom, misery, fear, and uncertainty he’s saddled us with if we know when we’re going to die? We might decide to live lives of meaning and peace!

So dad follows his daughter down to the real world and attempts to bring her back. What he finds are a lot of people not amused by his claiming to be God. They beat the shit out of him. Poelvoorde really nails his character. He’s as seedy, vile, and disgusting as you’ve always secretly imagined. His only pleasures lie not merely in the misfortunes of others, but in having caused those misfortunes himself.

Much of The Brand New Testament is a hoot. As they say. Van Dormael knows how to keep things moving. Creatively loopy details abound. In the end, he never digs very deep, much as in Mr. Nobody. The overall message is, “Hey, let’s be nice to each other, okay?” But that’s not so terrible a message to deliver, especially when delivered in such amusing fashion. If you’ve ever dreamed of giving that malicious punk God what’s coming to him, this is your movie. 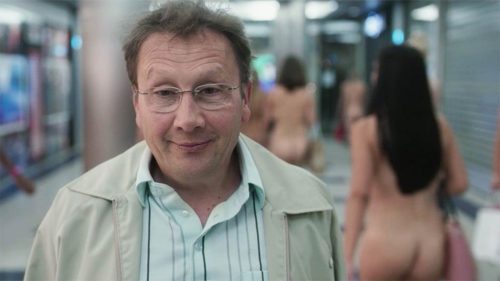 2 responses on “The Brand New Testament, In Which God Is A Miserable Fat Belgian Bastard”