There is a magical land, not far from here and yet utterly elusive. In this place the strings of destiny hum. They tremble quick, in the manner of those threads imagined by theoretical physicists—strings that are simultaneously one-dimensional and yet resonant across and beyond realms of mystery. Yea, verily, in this world of possibility, our fates are unwritten—they cannot be etched—for we are all things here and none. We are as free as our lord and savior, Dominic Toretto.

We are fast. We are furious. We are criminal. We are justice. We are the singularity. And we are these things yet again, forever. 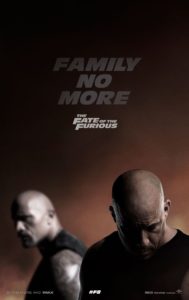 The Fate of the Furious, or F8, or A Hodgepodge of Action Sequences of Escalating Improbability is not only the latest Fast & Furious film, it is also a gateway to another dimension. If Furious 7 was an unstable isotope, F8 is a black hole, a gorgon’s gaze, and the mountain-sized extended index finger of a lubricated latex glove.

It is a film one might wish to attend wearing a kevlar vest, rubber undies, and a tinfoil hat.

It is a film one should boot into using safe mode. (<- geek joke)

It is a film one could care to see, if one is a human on the planet Earth and one has not already seen it, in order to propel it even further above the highest opening box office of all time.

If you have not caught up on all the Fast & Furious films, a) harrumph and b) you may find The Fate of the Furious incomprehensible—but no matter. Even if you have seen them all, multiple times, this film remains reliably, soothingly meaningless. It simply presents the latest configuration of a slowly expanding repertoire of movements, utterances, and individuals, as if you had a handful of baubles and tossed them onto the dinette on occasion to see which pretty patterns they’d make. 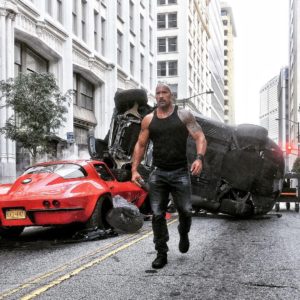 When you said “parallel parked” you didn’t specify parallel to what. So I chose the Prime Meridian.

Oh look! There’s the polished amber Toretto (Vin Diesel), all off on its lonesome! Here’s the princess-cut Deckard Shaw (Jason Statham), somehow balanced on the rough-hewn Luke Hobbs (Dwayne Johnson). How might I extract meaning from such a confluence?

With words? Pshaw. Let’s use explosions instead.

The Fate of the Furious starts in Havana with a preposterous road race. Toretto and Letty (Michelle Rodriguez) are honeymooning and there’s some cousin of Toretto’s who’s about to lose his decrepit car and you know the drill. Everyone must drive as fast as possible until one or more car explodes into an advertisement for depilatories.

Prologue over, Toretto—who a few films ago was just a gearhead who jacked stereos—gets braced by a mysterious woman with white-girl dreads (Cipher; Charlize Theron). Cipher shows our meathead hero a video clip that puts the fear of god into him; one assumes it must be the dailies of his performances from the last few films, but no! It’s something worse. 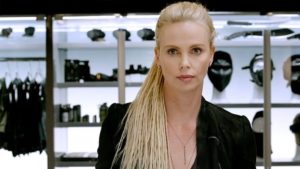 Welcome to my flying knife and high heel collection room. I got you a friendship bracelet.

See if you can guess. Or care.

And then the handful of baubles are tossed once more onto the dinette and their positions are interpreted anew like tea leaves or the entrails of an albino goat.

In brief, on the off chance you think the plot here is somehow relevant, someone has stolen a thing and Hobbs needs Toretto et al to retrieve it except oh no! Toretto goes rogue and absconds with it as he’s now under the influence of Cipher who is basically an amalgam of all the Bond villains from the Timothy Dalton era. Still with me? Good. Because now Hobbs has to work with Deckard Shaw and Torettos’ family to catch Toretto, who, in case you forgot, has now curiously become the Aquaman of muscle cars.

It’s about family, see? And whatever else you decide you want it to be about. Screenwriter Chris Morgan won’t care, believe me. He’s getting hella paid and it’s not to write good dialogue for Cipher, who talks like what Matthew McConaughey‘s character in True Detective would sound like if you replaced his brain with a basket of fetid lawn clippings and a few Slipknot CDs. 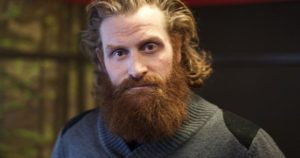 I’m too sexy for this film.

Cipher is bad, okay? Can’t we just let that be enough? She at least had the wherewithal to hire the excellent Kristofer Hivju as her chief henchman. Can’t we give her a pass for that?

I could tell you more about how the plot is lumpen and infantile—like a baby hippo born with no bones—or speak to the prevalence of computer and computer-aided effects, but you don’t care. This is the EIGHTH Fast & Furious film and if you’ve survived this long enjoying the antics of this crew of anthropomorphized firecrackers in tight pants, who am I to cast aspersions?

I kind of like these yeggs, too, to be honest.

This film, though, not so much. Like the original Star Trek films, the F&F franchise is settling into a one decent / one not rhythm. Fast Five was great, 6 sucked, 7 was insane, 8… well… The Fate of the Furious pushes everything too hard, straining the delicate strings of fate past their point of resonant tension. Here, these babies just plain snap and lash and man do they leave a welt. 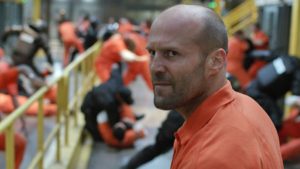 Characters that are required to play nice due to plot machinations get instantly promoted into the family. Welcome! Here’s your character trait! Don’t lose it because you won’t get another regardless of how universally your character’s skill set changes.

Family members that occurrences demand be cut loose simply don’t appear, or cameo briefly, or get fed into an industrial chicken separator. And then there’s the submarine thing, which certainly you’ve seen in the film’s trailers.

Yep. There it is.

Since Toretto has become a surrogate James Bond, he needs a Bondian antagonist and a Bond-level, world-threatening danger to stymie. Save us, Toretto! You’re our only hope! 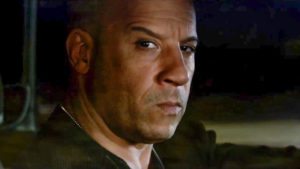 This expression is a multiple choice quiz.

Still, The Fate of the Furious has its merits. Chief among them—it shocks even me to write it—is that Vin Diesel seems to have finally learned how to act. While his may be a measly, emotionally-challenged, plasticine sort of acting, it is indeed acting. There were no fewer than two instances in which Vin Diesel conveyed his inner feelings to the audience using his face parts in The Fate of the Furious. AND, what’s more, those emotions included genuine sorrow and intense rage, neither of which have been in his quiver thus far (it usually holds just three bolts: aggrieved irritation, genial insouciance, and post-coital or post-race contentment). 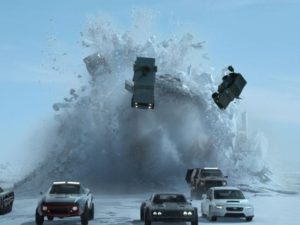 The submarine sequence, while beyond comprehension on any level, is also pretty fun. It’s not Fast Five fun, or even Fast & Furious 6 ridiculous, but it is enjoyable to behold. It is jaw-droppingly audacious in its intensive stupidity.

And, in that way, it’s like the best part of this whole series: the fact that these characters, whom we presumably know well, are now the ones called upon to save the planet from diabolical evil. That’s Toretto, Letty, Roman, Tej, and the rest. These folks who one would doubtfully trust to remove dried egg off the breakfast plates are here, again, saving the world from apocalypse.

It is madness. It makes one question how such characters could be presumed to have ‘fate’ in the first place, let alone avoid or change it. They are like photons—both a particle and a wave simultaneously, depending on how or if you observe them. It is madness and genius.

They are—these characters and these films—an incantation designed to bring about the age of stupid.

4 responses on “The Fate of the Furious Remains Unwritten”