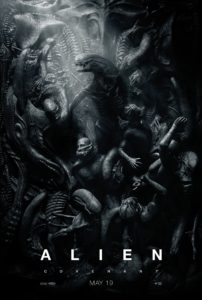 According to Ridley Scott, the reason Prometheus wasn’t as beloved as it might have been was its lack of the classic Alien xenomorph. Fans want the alien they know and love, he was surprised to learn. And why not? It is rather shocking, is it not? That people who love a movie monster, when asked, will say that’s what they want more of? Yes. Quite alarming. More alarming still, that Scott would listen to a bunch of yokels on the internet and give them what they say they want.

Ridley Scott, in a perplexing but all too familiar move, decided to give the fans what they said they wanted and thus filled Alien: Covenant with the familiar aliens of Alien movies past.

So what we get is something like a sequel to Prometheus grafted together with an Alien retread. The characters are just as dumb as those in Prometheus, but they die more horribly and more often. Also, CGI versions of the xenomorph run around in a way one might describe as the opposite of scary. Remember in Alien when we think Ripley has escaped? The Nostromo is blown up, she’s chilling in the escape pod, and you suddenly realize that the shiny duct you’ve been staring at is actually the alien’s head? Nothing in Alien: Covenant is half that scary.

Here’s where we get into all the spoilery bits, so reader beware:

Just shy of five years ago this little movie site began with a write-up of Prometheus in which I lamented how it was full of interesting ideas, all of them squandered. Covenant offers fewer ideas, but squanders them just as effectively.

Doesn’t anyone in these movies find it at least a tiny bit mind-blowing that humans were created by humanoid blue “Engineers” still alive and well on a distant planet? In Prometheus, within five minutes of arriving our dopey heroes discover a massive, terraformed military installation with wild, life-sized, 3D videos of Engineers, and then a dead one, its head perfectly preserved. You might think this is the most amazing verification of a completely mad theory in the history of science, but no. It is, rather, a reason for the scientist whose mad theory it it to get drunk and bitter and bitch about a wasted trip—the Engineer is dead! It was all for naught! And one is left thinking, cheer up, dude, you just proved that humanity was created by distant beings on another world which you have personally discovered in the course of a single afternoon’s exploration. Maybe give it another day before you turn suicidal?

Meanwhile, we get the plot point of David the robot going robo-loco and infecting that same sad scientist with the icky black goo of doom. A great plot point—unless half the team had already become infected and were busy exploding and/or being eaten by vagina-snakes.

In Covenant, nobody gives a damn about alien life, to the point where I honestly have no idea what the state of alien contact is in this series of movies. Are non-deadly aliens the norm? Have we discovered life on other planets? These people show up on the mystery planet to find it lush with trees and wheat. And nobody blinks. Just another one of those Earth-like tree worlds, I guess.

Yes, weird that it’s Earth-wheat. Even weirder? That there’s wheat at all!

The worst minute or so of Covenant is when they take what might have been a truly fascinating jumping-off point for a sequel and kill it in one fell swoop. It’s the flashback to David’s arrival on the Engineers’ home planet. He shows up in their ship, docks, and sends thousands of black goo cannisters to greet them. They all die.

Humans were created by a race of ancient, space-faring beings, and when this movie brings us to their homeworld, it kills them in a single, minute-long scene.

Why does David have it in for them? The creators of his creators? Wouldn’t he be fascinated? He despises humans—and hey, who wouldn’t, given the caliber he’s forced to hang out with—but humans are just bugs in a petri dish. The real deal are the Engineers, yet he doesn’t even want to chat with them? Doesn’t want to learn from them and become the superman he imagines himself to be? Both of these movies are desperate to give enormous weight to the notion of the human creation wanting only to destroy those who made him, but neither offers any plausible motivation. It’s assumed that so long as a robot quotes Lawrence of Arabia and Shelley, he must be deep and troubled, and when he’s so troubled he confuses Shelley for Byron, human extinction via creative bio-beast manipulation is the logical next step. 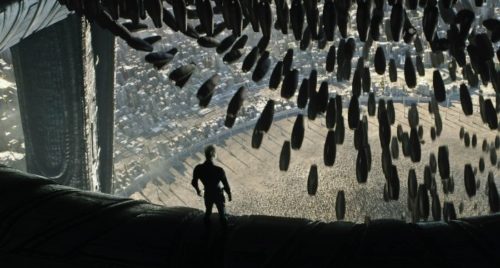 In any case, we’re left to watch a movie on a dead planet, humanity’s creators wiped out in the back-story, and what’s there to watch but aliens killing people in ways all too familiar?

I know it’s boring to say CGI sucks, but when it comes to monsters, there’s nothing left to be said. The alien-puppet that bursts out of John Hurt is obviously a puppet—and it looks fantastic. It’s profoundly weird and alarming. When it runs across the table in a way only a puppet would ever run, you remember it. It sticks in your head. It’s wrong, that movement. And wrong is scary.

In Covenant, we get the same scene, only this time a perfect little CGI mini-xenomorph is birthed. It moves like all CGI monsters move, with a perfection so perfect it’s fake. 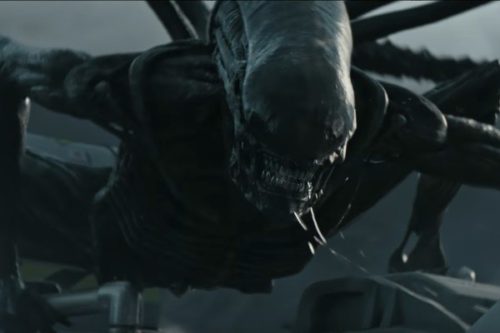 An old friend drops by

To its credit, Covenant recognizes its half-assery. At the end, there’s a fight between robots. David and his less-imaginative double, Walter, duke it out. The fight ends with a slight nod toward ambiguity, but in a way assuring viewers it’s David who won, and he’s now pretending to be Walter. Which feels like the movie saying, “We’re not going to even bother trying to fool you here, it’s just too goddamned obvious a ploy,” which it is, so they don’t, we know it’s David, and none of the characters figure it out until—oh my god! It’s too late!

David sneaks two xenomorph embryos aboard, stores them with the human ones, and off they go on their mission of colonization. So no wonder Scott’s down for sequels. The next movie can start with a ship full of colonizers heading to the same planet the long-lost ship Covenant was headed to, only to discover upon arrival something terribly wrong—where is everyone? What are these strange egg-like pods? Oh my god look out! There’s aliens everywhere! Thank god we brought along some Marines…

10 responses on “In Which Alien: Covenant Is Lamented”