Nazis. How do you write about movies when Nazis are wandering around from city to city demanding “free speech”? The world’s gone pear-shaped, and, as if to reflect the outer cultural mood, I’ve been watching, unpremediated, any number of pear-shaped movies of late.

Like Paul Verhoeven’s Starship Troopers. Last week I saw it projected for the first time since it opened, back in ’97 when I, like so many others, wrote it off as a pro-war bullshit action flick lacking, aside from a few obvious gags, the subversive insight of RoboCop. I changed my tune when I caught it on video six months later, and laughed all the way through, marvelling that I’d so totally misread a movie. 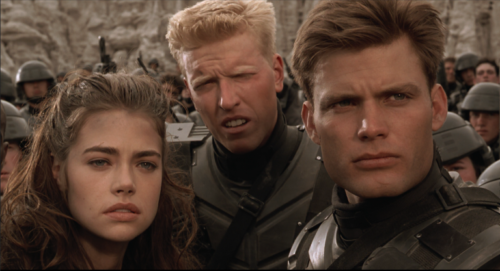 The faces of Nazi youth

It’s so easily misread because it so closely resembles the kind of sci-fi and action movies we’ve been trained to take seriously. A bunch of pretty, young, Hollywood Barbie dolls go to war—and love every minute! Because why not? They’re killing the bad guys. Hooray!

There’s a lot of those pretty faces in Starship Troopers, going through all the cliché war movie motions we’ve come to expect, albeit written and shot better than most, and it’s the bulk of that material that acts as the real misdirection. It’s so sincere. The jokey bits start to feel few and far between. Is this movie serious or isn’t it? This is what caused so many critics at the time to pan it (and audiences to hate it). It felt like everything else in theaters, yet with the violence and shallowness cranked up even higher.

The trick is to remember who you’re watching: Nazis. This is a movie about war-loving fascists. They’re the heroes. We’re rooting for the fascists bent on genocide. All those lengthy scenes of young soldiers fretting over young love—those are Nazis. Fresh-faced and eager to kill, we cheer them on from battle to battle, until, at last, their ultimate objective is achieved: Fear. 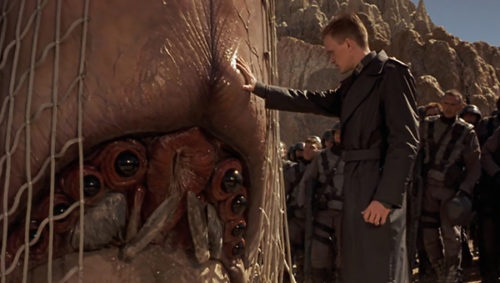 “The only good bug is a dead bug!” This and so many other lines must be taken verbatim by writer Edward Neumeier from fascism’s greatest hits. Verhoeven dresses his actors in barely disguised Reich-wear and takes directorial cues from Leni Reifenstahl. The more often one sees this movie, the more outrageous it becomes.

To slight the acting and the scenes of teenagers in love is to miss the point entirely: Verhoeven is using the template of the American action movie to remind America of its inherent fascist tendencies. Those scenes are supposed to be boilerplate. They’re supposed to feature the shiniest, most TV-ready actors in Hollywood. Verhoeven said he wanted to make a movie where the audience roots for the Nazis, so he gave us familiar types to root for. We’re used to rooting for the shiny, beautiful people. We love seeing them obliterate the bad guys. Might makes right.

Dectractors say the satire is too subtle. Why isn’t it like Dr. Strangelove, they wonder. Perennial dope Roger Ebert claimed that by using lines and scenes straight from Robert Heinlein’s non-satirical book upon which the movie is based, subtle satire slips in by accident. By accident! The hubris on that punk, my god. Sure, Ebert, Verhoeven, who lived through Nazi occupation, “accidentally” included jabs at fascism in his otherwise sincere, pro-genocide movie. 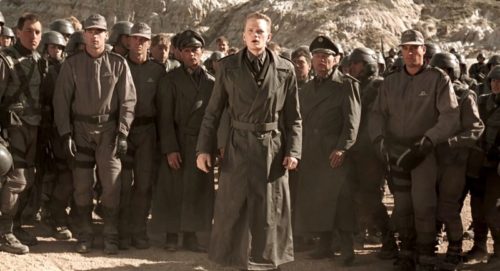 Wait a second–where’s Indiana Jones in this picture?

Neumeier has always maintained that the movie is meant to satirize fascism in general. Verhoeven, however, was taking specific aim at the fascism he saw in America. In the ‘90s, one can see how this might have been harder to conceptualize for actual Americans. Harder than now, when madmen waving Nazi flags are marching in the streets. Not that Starship Troopers would play any better were it released today. Worse, probably. Actual fascists would love it. Who wouldn’t want to wipe out those damn bugs?

Another recent screening: Taxi Driver. Featuring slightly fewer alien insect hordes. Hadn’t seen it for years. A movie about an angry white man, an ex-Marine who fought in Vietnam, with no way to express his outrage at… well, at whatever it is that’s eating him. At society, let’s say, at the scum of the earth he drives past every night. 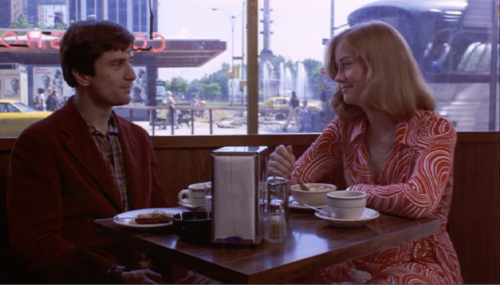 Which the meaning of the movie is therefore—

Hm. Truth be told, I never had any idea what to take away from Taxi Driver, and didn’t this time, either. Cinematically it’s stunning from end to end. Martin Scorsese really found himself stylistically with Taxi Driver. On the one hand, it looks exactly like a movie from ’76, yet the way he shoots it, it looks like nothing else.

The performances are stellar, the music, by legend Bernard Herrmann, is all smokey jazz, the city of New York has never looked filthier, it’s a brilliant piece of cinema.

And still I have no idea what it means. If anything. Paul Schrader said he wrote it in a three week blur. The movie definitely feels like something. Anger, frustration, emptiness, lust. It’s no wonder it was the sensation it was. It hit at exactly the right time with exactly the right vibe. 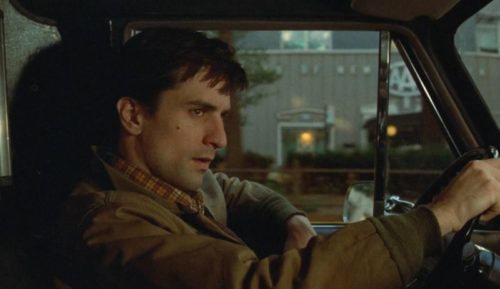 Maybe that’s the answer. It gives cinematic voice to a nebulous feeling of outrage and frustration. A feeling apparently shared by the narcissistic manchild currently in charge of the country and his newly emboldened minions. Do we need a Travis Bickle to take them out? Or are the minions themselves an army of Travis Bickles? Both options seem less than ideal.

So, I don’t know. I appreciate Taxi Driver without much liking it. I prefer to think of Travis as one of the young soldiers in Starship Troopers back in NYC after the end of the bug war. All that anger and aggression the fascists pulled to the surface he’s forced to sit on. What’s he going to do? Who’s he going to shoot? Us? 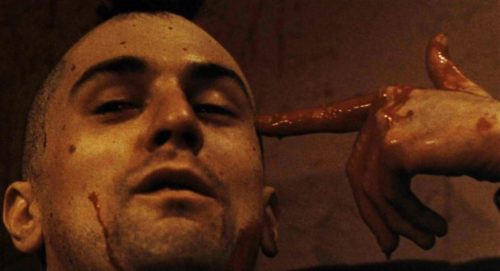