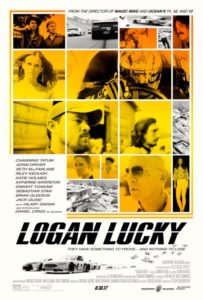 On the one hand, I’m awfully glad Steven Soderbergh is making films again. On the other, Logan Lucky is as robust as cotton candy on an August day in Death Valley.

Amusing, jovial, colorfully-populated, and charismatic: Logan Lucky is all of these things. What it isn’t is any kind of follow up to Ocean’s Eleven, Twelve, or even Thirteen. As a man who has watched every single film and show Soderbergh’s made — even K Street and both parts of Che — this one ranks roughly between King of the Hill and Side Effects, at the low end of the list. It jumbles a grab bag of kooky characters into a vastly implausible scenario, sets the thing on high, and pretty much stands back to see what happens. So, more than anything else, it feels like Soderbergh’s run at making one of Joel and Ethan Coen‘s less-successful comedies. 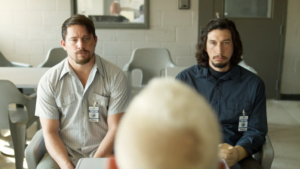 But while you might walk from those films unburdened by any deep meaning, here you leave without meaning or substance or even much elan.

Logan Lucky follows Channing Tatum‘s Jimmy Logan, a largely-unsuccessful construction worker, as he has a go at a genius-level heist. He enlists his one-handed brother, Clyde (Adam Driver), his zippy sister Mellie (Riley Keough), explosive local legend Joe Bang (Daniel Craig), and a few other yahoos to do the can’t-be-done in the land of NASCAR and John Denver.

So look. It’s a script that wants to have and to eat its cake. Jimmy Logan is the kind of guy who people think is dim, but either they’re right or wrong: they can’t be both. And if Jimmy is dim there’s no way he could pull off even a slice of this ambitious plan, let alone the plan, the pre-plan jail break, the secret second plan, and all the rest. So Jimmy’s not dim, he just needs the assistance of dim people? Or he’s just working a Blue State stereotype of Red State yokels in order to… what, exactly?

For if Jimmy isn’t dim, he’s deliberately picked a high-stakes, relatively low-reward heist in which to risk the futures of all his surviving family members. He’s set up his caper in a way that involves maximum complexity, essential coincidence, and that — if all that planning is in his wheelhouse despite appearances — leaves a ton on the table.

Jimmy Logan is smart-not-smart. Or clever enough to be awfully stupidly clever stupid. And, as a result, I don’t know what to think about him or his compatriots. I watch the tropes of that side of America fly by — his beauty queen little girl, bobbing for pig’s feet, etc. — and am told by the script that I shouldn’t be taken in by appearances. Simultaneously, some of those people who look and act like yokels in Logan Lucky are indeed buffoons. 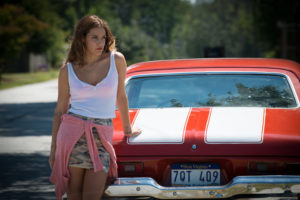 This is because none of the characters in Logan Lucky, as well-acted and entertaining as may be, ring true. They are all played for laughs and then revealed shruggingly to be serious, but not really. They are the equivalent of the movie hacker kid who manages to steal a billion dollars after reading ‘Bank Hacking for Dummies’ and surviving a 3-minute training montage that involves a lot of Dr. Pepper and Cheetos.

Blue State dreams vs. Red State dreams, all filtered through the pitch black glasses of Hollywood. I’m surprised Soderbergh picked this one and let it fall so limply.

Logan Lucky is a pipe dream — literally even. There’s nothing inherently wrong with that, but it’s also not as satisfying as watching Danny Ocean get away with the vault entire. Danny Ocean is a character that one believes could and would dare do such an insane thing. Jimmy Logan isn’t. And certainly my lack of connection with him and faith for him is colored by my lack of affinity for NASCAR, mining work, and little girls allowed to compete in beauty pageants, but then I enjoy John Denver as much as the next guy, non-ironically even. 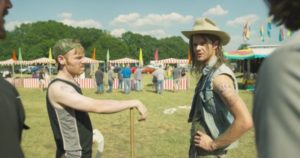 Are we laughing with you or at you here?

If you can’t tell, I’d call that a fairly major problem.

In the end, Logan Lucky feels like the frothiest Coen Brothers’ films do. As if you’ve spent a chunk of time watching kooky caricatures lope about with untested guidance systems while calamity ensues. In Hail Caesar!, this was much the case — but Hail Caesar! also contained some of the Coen’s cleverest lines, fantastic use of setting and style, and Channing Tatum dancing for all he’s worth.

Not so much in Logan Lucky.

Hillary Swank was better in The Core.

The cast is good, but they’ve been much better in other things; Magic Mike immediately comes to mind. And while I enjoyed Daniel Craig’s unhinged turn as Joe Bang, I never bought it. When compared to the performances Soderbergh got from Matt Damon in The Informant! and Behind the Candelabra, these wooly turns show little but stitching. Hillary Swank’s Special Agent is a human placeholder. Seth MacFarlaine’s gauche racing team owner was supposed to be a joke, but I never laughed.

Logan Lucky frames itself as a paean to the people of the Mid-Atlantic and their underrated pluck. ‘Take me home, country roads,’ it croons, but I was not tempted to make the journey.