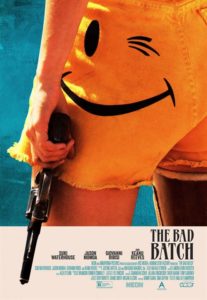 And yes, some style and skateboards and a swirly, beat-y, retro knockaround soundtrack. But it starts somewhere and from there noodles mostly nowhere, and never fast. If you want my pithiest review, here it is:

Watch A Boy and His Dog instead. 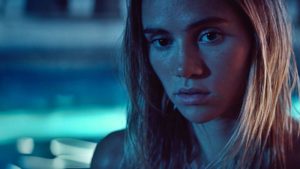 The Bad Batch follows a slight young woman (Arlen: Suki Waterhouse) as she is identified as a member of the ‘bad batch’ and exiled into a non-American desert wasteland. All this is quite nice. Particularly when her nonchalance results in her being half-eaten for supper by a crew of body-building cannibals (namely Jason Momoa, trying his hand at a Cubano accent). 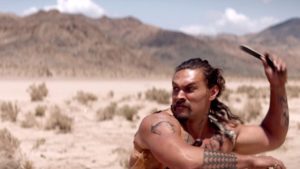 Anyway, she gets away and we get what passes for a wastrel’s tale. Arlen wants something, but she’s not sure what. She survives, more-or-less. Conflict exists but mostly by happenstance. Keanu Reeves does that thing he does when he’s required to act. Then more cool tunes play, the cinematography swirls in an acid-head freakout, and it ends.

The Bad Batch is mostly boring. Beautiful, near-poignant, and boring. It’s dreamy, but not as A Girl Walks was dreamy; this one’s fantasy feels both directionless and forced. Imagine if you took Mad Max and mixed it with mumblecore and maybe a dash of Hal Hartley. Just, you know, with cannibals and psychedelics and fear of the other. 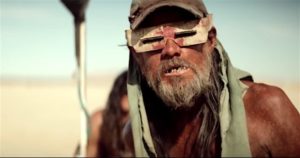 It doesn’t help that Suki Waterhouse is challenged to exhibit enough presence to generate empathy or interest as Arlen. The film hangs on her shoulders, slim though they may be by design. This is a character that’s disassociated and dissolute. Her trauma (read: being eaten) leads her along a gentle journey of self-discovery. Whether or not it’s a trip worth making or one in which progress is made, I decline to argue. I do know that she wasn’t close to the most interesting character about — that would be Giovanni Ribisi’s semi-lunatic who knows he can’t forget the thing he may not know and barely earns any screen time. I also know that by the time the film and Arlen’s journey came to a close, all I could think about was how little there was to think about, particularly if you compare this one to L.Q. Jones and Harlan Ellison’s A Boy and His Dog.

And the similarities may be coincidental, but regardless, they’re unfortunate. 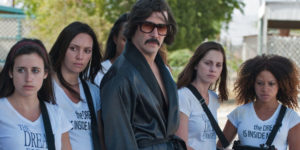 Because A Boy and His Dog skewers society and its aims while The Bad Batch sets up some loose analogies and doesn’t close the loop. (Momoa’s crew = base consumerism; the Comfort community = the unpaid price of privilege; a child = oh come on.)

Amirpour does pull off some magic in moments in The Bad Batch. She starts strong. She does a lot — and well — with a limited location and production budget. Her rendition of an acid trip is as accurate as they come. As for the rest, I agree with the script: it’s a cruel, dog-eat-dog world without much in the way of meaning and you can and should pull from it what wisdom and joy you can.

And then, probably, you should get some wire cutters and let yourself out of the whole damn scenario. People are fucking eating each other in here.