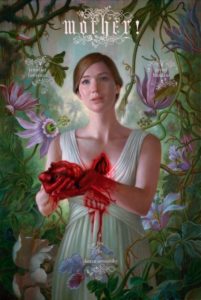 Mother! is Darren Aronofsky’s nightmare parable of humanity trashing the Earth while an indifferent, fame-hungry god sits by idly signing autographs until, once again, the whole mess burns to the ground and he has to start over from the beginning.

If you try to peg every incident in the film to the Bible you are, thank heavens, going to fail. Aronofsky isn’t being literal here. Well. Except when he is. It’s more of a generally allegorical parable type of thing he’s thrown together, and so long as you catch the basic drift and let yourself be carried along, it’s a great ride.

Javier Bardem plays god, or, as the credits would have it, Him. He’s a writer who lives in a beautiful old house seemingly in the middle of a natural paradise with his wife, Mother Nature (Jennifer Lawrence), or, per the credits, mother. Mother has been repairing the house all by herself, and it’s looking pretty fantastic, if she doesn’t say so herself.

Everything’s groovy if not slightly and mysteriously unsettling until a strange Man comes to visit, played by Ed Harris. God seems especially thrilled to have company, especially when Man tells him he loves god’s books. Matter of fact, he’s god’s biggest fan. God can’t get enough of this guy.

Mother’s less keen on having a stranger visit, especially when his wife, Woman (Michelle Pfieffer), shows up, and god tells them both they can stick around as long as they like. He doesn’t even ask mother’s opinion.

Is it any surprise the next uninvited guests are the couple’s bickering sons, and that one kills the other?

mother looks where she oughtn’t

Aronofsky plays this first part of the film like a nightmare. Not the usual kind of movie nightmare, with monsters and wacky visuals and scary music, but the real kind, when there are people in your house and you ask them to leave and they’re going to leave but they’re never actually leaving, they’re just in another room, and you’re tense and confused and no matter how hard you try to make everyone understand you, no one does, and is it you that’s really the crazy one here?

It’s the kind of nightmare fueled by a stomach-tightening frustration that grows and grows with no seeming way to logically stop it.

Anyhow, all this excitement with the murder and whatnot gets god fired up enough to finally write his unwritten “poem,” and, even better, to make sweet, heavenly love to mother.

Nine months later, life is swell, she’s all set to pop, and god’s poem, though he’s seemingly only moments ago finished writing it, is already a best-seller. People love it! He’s so happy! Everyone loves him!

I’d say we all know what happens once god gets “his” work out there and the peoples get a look at it. The shit hits the fan. 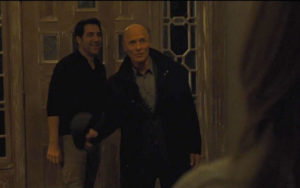 Man drops by to offer praise

The long final sequence of mother! is the insane part of the movie. It’s grand. I’ve never seen anything quite like it. It’s the history of religious fanaticism, obsession, bacchanalia, murder, war, and the end of the world all thrown together in a single night in a single house. I think it’s capped off by the birth of baby Jesus? Sure, why not? In any case, try as she might, mother can’t get god or for that matter a single human being to listen to her. They just don’t care. The humans are too busy being humans, i.e. unthinking, hideous insects, and god is too busy being worshipped by them.

The beautiful house Mother Nature has so painstakingly restored is trashed by humanity, and god doesn’t do a damn thing to stop them, just watches it burn knowing it would and knowing he’s going to start it all over again anyhow, because that’s what he always does. He’s going to get this right eventually. Right? Right. Now if he could just sign a few more autographs…

God needs love. Demands it, even. He’s greedy and selfish and cares for no one but himself. Exactly like that book he’s the star of. And we humans? We’re even worse. Mother Nature doesn’t need us to paint her walls! She has things just like she likes them, and would you please get the hell out of her bedroom?!

The extreme reactions to mother! aren’t surprising. It’s a strange piece of work. That mall crowds hate it is to be expected. In the realm of horror, it ain’t It. 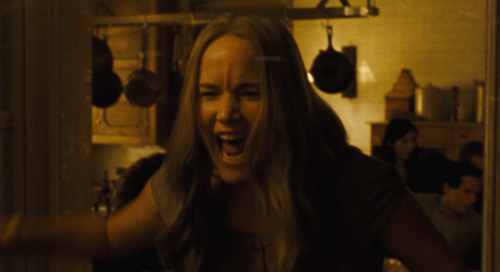 I liked it even without thinking much on it as an allegory. To me it works fine as a bizarre and creepy kind of horror movie. To people used to more sensible, linear story-telling, most of what happens in mother! won’t make any sense. If, like me, you prefer your movies out of the ordinary and unpredictable, the lack of familiar logic won’t be a problem. Mother! follows the logic of nightmares.

Aronofsky is hit or miss for me. I like Pi and The Wrestler quite a lot. Requiem for a Dream, not as much, Black Swan still less. As for The Fountain and Noah, oof. After Noah I’m stunned I liked another religion-themed Aronofsky movie, but here we are. I like mother! more the more I think about it. It’s like Aronofsky threw Rosemary’s Baby in a blender with Children of Men.

Maybe for all of mother!’s cinematic artistry, of which there’s plenty to admire, especially in the epic final sequence, the characters aren’t fleshed out enough beyond their allegorical purpose. Maybe the ending shouldn’t have been foreshadowed to the point of obviousness. Or, who knows, maybe it’s all just a bunch of pretentious twaddle you’d rather do without.

Maybe you should see it anyway.

One response on “People Are Dopes, And mother! Is Insane”