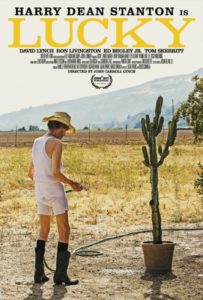 As if Harry Dean Stanton’s life wasn’t, in its laid-back, who-gives-a-fuck-way, charmed enough as it was, his swan-song film, Lucky, opening barely a month after his death at age 91, features Stanton, in only the second leading role of his career, playing a character who, at age 90, finds himself dwelling for the first time in his life on his own death.

It’s about as charming and sad and sweet as a movie can be, and it manages this feat with almost no story, almost no incident, almost no anything aside from Stanton, playing Lucky, living his daily life in a dusty desert town where, one assumes, he’s been living since the beginning of time.

Stanton plays the part like he plays every part, in a way where you swear he’s doing nothing at all, yet still he breaks your heart. He’s done this through his whole career and here he does it again, despite his age and frailty. Which frailty, by the way, seems pretty damn minimal for a 90-year-old man. I hope I’m as spry as Stanton should I reach 90.

Here’s the story: One day, Lucky passes out and falls down. He doesn’t know why. His doctor (Ed Begley Jr.) doesn’t know why. He’s 90, is all. He’s not going to live forever. Lucky goes back to his life, but he’s deeply troubled. How to face death? 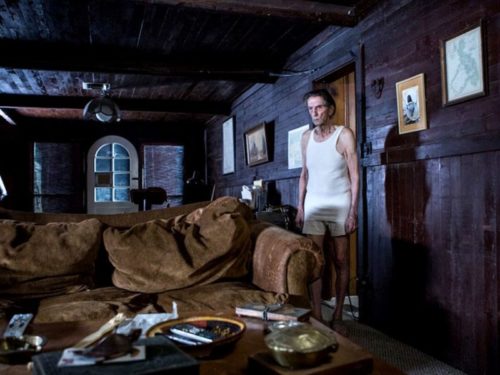 Lucky in the morning

Lucky is little more than a series of sometimes humorous, sometimes philosophical, sometimes charming and heartbreaking conversations and encounters Lucky has over the course of a day. Or two. Or so.

It reminded me a bit of David Lynch’s The Straight Story (which also, like most movies made in the past 60 years, features Stanton). But with less plot. In Lucky, David Lynch shows up playing Lucky’s friend, Howard, whose pet tortoise, President Roosevelt, recently escaped. It’s a different kind of role for Lynch. There’s nothing odd or over the top about it. His teary-eyed speech about what Roosevelt means to him will slay you, I swear.

Tom Skerritt appears as a fellow WWII veteran and chats with Lucky in a diner in what for some of us will be a long-awaited Alien reunion. Their conversation, about the war, is, as you know it will be, devastating.

Lucky smokes a pack a day. Says the owner of the diner, “Those’ll kill you.” Says Lucky, “If they coulda, they woulda.”

Lucky was written by Drago Sumonja and Logan Sparks. Sumonja directed a documentary in 2009 called Character, which consisted of a group of actors talking about their craft. The actors included Dabney Coleman, Sydney Pollack, Peter Falk, Charles Grodin, and—who else?—Stanton. Sparks was Stanton’s assistant. The pair wrote Lucky for Stanton as a tribute. Lucky the character’s philosophy of existence, summed up in one word—nothing—is Stanton’s.

Character actor John Carroll Lynch (of Fargo, Face/Off, Zodiac, a whole heck of a lot of television) directed Lucky. His direction is as low-key as his subject. He doesn’t get in the way. Lucky isn’t a showcase for direction, nor in a way for writing, either. Some scenes play a little awkwardly. As a movie, Lucky feels more like a succession of mostly wonderful scenes rather than a whole.

But those wonderful scenes. Every time Stanton is on-screen, which is just about the whole movie, you want to give him a hug, even if you suspect he might tell you to fuck off if you do. Lucky couldn’t be a more touching send-off for this uniquely lovable actor. I’m not saying you’re going to cry when he sings, but you probably will, you bunch of softies, you. 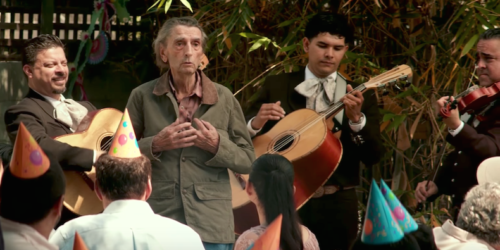