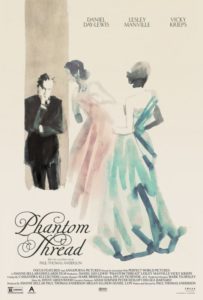 What is love but a phantom thread tying two people together? And who but those two know of what their thread is made? In Paul Thomas Anderson’s Phantom Thread, the lovers are famed (fictionally speaking) ‘50s dress-maker Reynolds Woodcock (Daniel Day-Lewis) and a waitress, Alma (Vicky Krieps), he decides to make his newest plaything the moment he sees her tripping over own feet at the inn where she works.

We meet Reynolds and his cold, taciturn sister, Cyril (Lesley Manville), at breakfast one morning enduring the last exasperated mutterings of Reynolds’s soon to be booted prior plaything. It’s Cyril who does the booting. Reynolds’s work is too important for him to be sidetracked by messy emotional dust-ups. His is a life meticulous and exacting. Butter your toast over-vigorously and he’ll snap. He does only what he wants, only the way he wants it done. Cyril is there to see that no one gives him the least amount of trouble.

Reynolds is attracted to women based on their use to him in his work. No sooner has he enjoyed a night out with Alma than he’s brought her home to take measurements. Matters have already been decided. She’s to be his new muse/model/lover. She won’t last, of course. They never do. Reynolds explains to Alma early on that he’ll never marry.

We must assume as the story begins that either Alma will be used and discarded or that she’ll crack open the shell Reynolds has built around himself and find a way in.

In the end, it’s not so simple. Love never is. 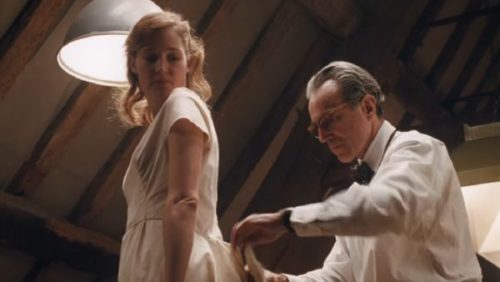 In a key early scene played as a bit of lovers’ repartee, Alma tells Reynolds that should he go up against her in a staring contest, he’ll lose. She means it. It’s an important insight into Alma’s character.

Phantom Thread is a slow burn kind of story. With just enough wit and intrigue and the ever-present threat of someone doing something terrible (but who? and to whom?), it never proves dull. It feels like the smallest movie Anderson has ever made—the fewest characters, the simplest story—and for my taste it is, on the whole, his best.

Anderson’s movies have the tendency to impress me with their artistry but to leave me cold when it comes to their reason for being. The Master is empty at its core and Inherent Vice never really translates from Pynchon’s psychedelic pages. Even There Will Be Blood, usually cited as his best, runs out of steam in its last act, leaving us with an incoherent old man yelling about milkshakes. Boogie Nights has a great first half and the less said about Magnolia the better (I suggest watching Short Cuts instead). 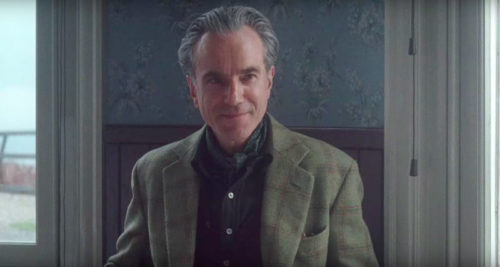 Daniel Day-Lewis is, predictably, excellent. His approach to acting mirrors Reynolds’s approach to his entire life: everything just so. As ever, he vanishes into his character. Is this, as he claims, his final performance? It’s a fine one to go out on. Though I bet he reconsiders. Someone will come along one day with a role he can’t turn down. Maybe Batman? Do we need a new Batman yet?

Krieps and Manville hold their own. Cyril is icy and unreadable and boiling with some kind of repressed fury. Alma is open and emotional and yet—she too keeps a part of herself hidden.

Early on, Alma finds that, when weakened physically and emotionally, Reynolds drops his guard. He opens up. This is the Reynolds she loves, the one who needs her to care for him. This is the Reynolds who won’t abandon her. Does he see his mother, deceased long ago, in Alma? Is that all he needs? A mother to look after him when he’s weak?

It’s a movie of small moments, of words left unsaid, of actions left unseen. Neither Reynolds nor Alma is willing to show their true selves. One moment their relationship is in tatters, the next it persists, and we’re as off-balance as they seem to be.

Out on a date

Only at the end are their true selves revealed, in one final scene, the outcome of which may or may not play, depending on your mindset. Metaphorically it’s lovely. In terms of the reality of the characters, it might be called a stretch. I liked it. It’s uncommonly unpredictable. Up until the last second Anderson keeps us hanging.

It’s rare these days to see movies that presume intelligence in their audience, where so little is on the surface, where one must pay attention to every stray glance and wayward word. In previous films, Anderson’s never quite pulled this off. Peel back the layers and there’s no there there. In Phantom Thread, he’s at last created characters deserving of the cinematic artistry he surrounds them with.