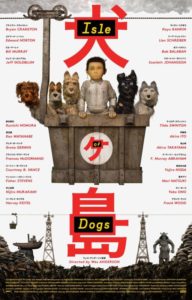 This, for me, is an occasional problem with Wes Anderson’s aesthetic sensibility. Certain of his choices, while lovely taken out of context, don’t make any sense taken in context.

Not that I’m blaming Anderson. I’m sure it makes sense to him. I hope it does, anyway. It’s as though, for some of his pictures, he starts with a small nub of a notion, then builds it out with whatever images and ideas come drifting past that stick. I imagine it’s possible these ideas don’t make any logical sense to Anderson. That’s often the way it is with stories and how they form. If something feels right, you use it. Ask too many questions of it and it might float away, and who’s to say if you’ll ever find another one?

Isle of Dogs stands out for consisting almost entirely of ideas that feel pulled from the ether at random. The story is that, in a future Japan, dogs are banned, and sent to live and, presumably, die out on Trash Island. A boy, Atari (Koyu Rankin), flies a little plane to the Island to find his lost dog, Spots (Liev Schreiber). Adventures ensue.

The evil Mayor tells off the kindly scientists

So, first off, why Japan? Because Anderson finds Akira Kurasawa films inspiring? Well, sure. Why not? So it’s set in Japan, future Japan, in make-believe city Megasaki, and the evil Mayor Kobayashi (Kunichi Nomura) looks a lot like Toshiro Mifune’s businessman from High and Low, and a dog rumble is shot and edited to mimic The Seven Samurai, and no doubt still subtler references crop up here and there.

But do the Japanese have something against dogs I don’t know about? Maybe it was just time for Anderson to make the Japan-set picture he always wanted to make, and the stop-motion dog story was up next, and hey presto, now they’re one and the same.

What about Trash Island? Is that a thing? That also struck me funny. Why set the movie on an island of trash? What’s Japan doing with a trash island, anyway? I guess dogs are happy to dig around in trash, but that’s not exactly a defining dog-trait. Is it? Dogs will eat anything. You could just as easily, and perhaps more appropriately, set the movie on Shoe Island.

Behold the wonder of Trash Island!

And why, among the many dogs, are there no Japanese dog breeds? I kept waiting for the Shiba-Inu to show up. Did I miss one? Those things are adorable!

At the outset, we’re told the dogs’ barks have been translated into English, but that everyone else will speak in the their native tongues, with only occasional translation. Makes sense in terms of having the audience identify with the dogs. In terms of the Japanese characters, I couldn’t help but feel they were a bit dehumanized. Who agrees to ship dogs to die on an island made of trash? Which dogs have been infected—on purpose—with disease? Monsters. That’s who.

Luckily, there’s a spunky American girl, Tracy (Greta Gerwig), on hand to inspire a group of young dissenters to take action. Folks other than me have noted this is something of the white savior trope in action, and, well, yes. It is. It’s not as bothersome as, say, Dances With Wolves or The Last Samurai. But it’s there. And with most of what the Japanese characters say being left untranslated, it’s not easy to feel for them as characters the way it’s easy to feel for English-speaking Tracy. They’re more like background.

Not that Wes Anderson is out to mock or belittle Japan. Far from it. It’s more that his Japan is not the real Japan, but a Japan inspired by the many Japanese movies he’s seen. It’s an imagined Japan. This is his way of paying homage.

As one expects from Anderson, the design of the movie is meticulous in the extreme. The look and the feel of his imagined Japan is of the utmost importance. Shot in his sort of lo-fi stop-motion, it’s all a marvel just to look at.

It’s a little boring, too. It is, perhaps, overly designed, overly like a story-book or a dollhouse, even for Anderson. There’s nothing very alive in here. It comes across as a curious, highly detailed artifact one appreciates from a distance.

It’s also, at times, funny and goofy and weird. In the world of Anderson’s films, it sits for me somewhere in the middle. It doesn’t sink so low as the mystifyingly bad The Darjeeling Limited, but neither does it scale the heights of Rushmore and The Grand Budapest Hotel.

I’ve said little about the dogs. They’re the characters we get to know, yet I never felt like I knew them so well, either. I couldn’t even tell which one was Bill Murray. Only Jeff Goldblum, as Duke, who’s up on all of the latest rumors, sticks out. Goldblum seems only to be getting more and more compelling and magical these days. Interesting, that. Also great, even though she speaks maybe five words total, is Tilda Swinton as the Oracle. I could have spent a lot more time with her.

I’m afraid I thought Chief was voiced by George Clooney for the whole movie (it’s actually Bryan Cranston), and when, at last, Spots is found, I thought, no, wait, is that George Clooney? It is not.

I feel like every time I see a Wes Anderson movie, I think, wow, that is the most Wes Anderson Wes Anderson has ever been. Last time out, in The Grand Budapest Hotel, the excessive Andersonishness on display worked wonders. It felt like he was pushing himself in new directions while at the same time settling even more into his little story-book world. Never before had he created a character as complex, emotional, sad, and profane as Ralph Fiennes’s Gustave H.

Isle of Dogs, despite its setting and all the trappings that come with it, feels like Anderson playing it safe. It has no one like Gustave tearing up its dollhouse setting. It could have used him. 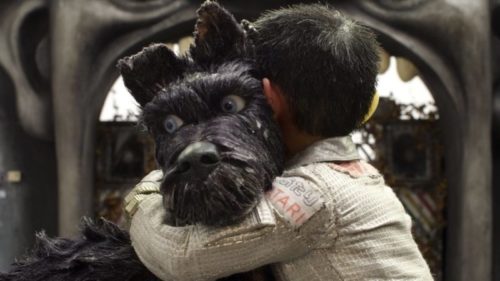