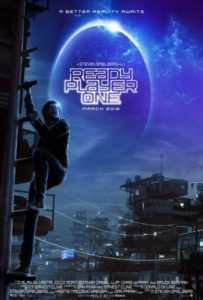 Ready Player One, the latest labored snooze from reliable snooze-master Steven Spielberg, is a throwback to the worst of ‘80s cinema dolled up in a shiny, spastic, CGI maelstorm of extraordinary magnitude. It tries harder than any movie in recent memory without ever revealing what it is it’s trying so hard to—I don’t know—be? do? It is, in a word, perplexing.

Remember when Spielberg made those amazing, fun, kinetic movies full of adventure and wonder we all know and love? So do I. I think I was ten at the time. Well, let’s give him Jurassic Park, anyway. Jurassic Park came out 25 years ago. Its memorable tyrannosaur shows up in Ready Player One, as do another eighty billion pop culture references, vaguely focused on the ‘80s, but not so you’d notice.

We get King Kong from the ‘30s, The War of the Worlds from the ‘50s (with creepy sound effects to boot), Firefly from the aughts, and everything in between.

Why even make a movie full of pop culture references? In the book the movie is based on, by Ernest Cline, the point is clear. The hero, Wade, is obsessed with ‘80s and ‘70s pop culture because that’s what Ernest Cline is obsessed with. The diaphanously thin story involves Wade using his trove of useless knowledge to solve puzzles, win a mighty prize, and get the girl. It’s the dream of every nerdy ‘80s boy who ever lived. At last! My scriptural knowledge of Monty Python dialogue is going to make me rich and get me laid! Callooh! Callay! 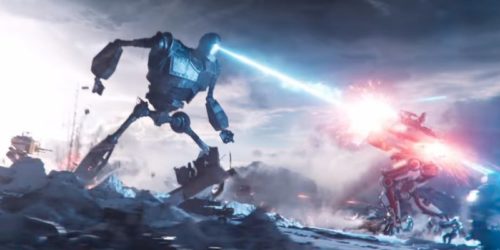 The book was written for nerds. Lucky for Cline’s bank account, the book crossed over. As they say.

But what’s a Spielberg to do with the movie version? How to ensure that your nerd-reference-packed story makes sense to the humans of today, most of whom don’t know a damn thing about nerdy ‘80s trivia?

Easy. You remove any meaning or purpose from your pop culture references. They’re still there—they have to be; they’re the selling poing of the movie. There’s Freddy Krueger! And the Iron Giant! And Speed Racer’s car! And Devo’s flower pot hats! And Batman, Chucky, and Spock’s coffin! Thing is, none of the references have any meaning to the story. We’re told that game designer genius James Halliday (Mark Rylance) loved all things ’80s. We’re told that Wade (Tye Sheridan) knows everything about Halliday and, presumably, about the ’80s trivia he loved. But nowhere is there any evidence of Wade’s love. He just spits out a few factoids here and there.

And any trivia spoken of is fully explained, to make sure everyone watching understands it. There is zero assumption of the audience knowing anything about the trivia the movie purports to love. There is nothing shared between the movie and the audience. The movie tells us what it wants us to know. We need bring nothing. 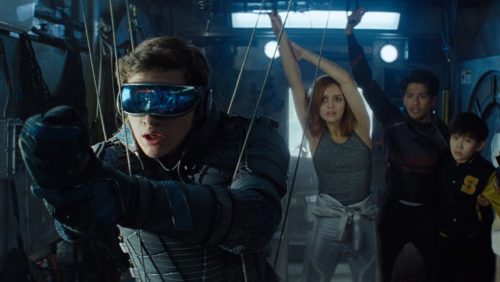 The Hero and his loyal assistants

Which of course destroys the point of nerd-knowledge. If you need it explained, you’re not in the club. When I walk around wearing my See You Next Wednesday T-shirt, I don’t announce what it’s in reference to. If you know, you know. This is how nerds—back in the ‘80s, when being a nerd was the opposite of cool—found each other. When you muttered, “You guys playing cards?” in the back of class, and some weird kid muttered back, “Sophomore dies in kiln explosion,” you knew you’d found your new best friend.

One prolonged sequence takes place literally inside of The Shining. Visually, it’s a neat trick. Actual footage from the movie is used, yet we’re thrown around it in strange ways. It comes across as a very unsettling digital recreation. And yet. Our heroes survive the Overlook not because of any particular interest in or knowledge of The Shining. They throw out the “trivia” that King hated the movie, but there’s no puzzle to solve. They run from the monsters and don’t get killed. The Shining provides nothing but background. It could have been any movie. (It was Blade Runner in the book, but Spielberg couldn’t get the rights).

All of Ready Player One’s pop culture is nothing but background. It’s décor. The characters don’t show any particular interest in it, not unless it helps them in the contest begun by dead James Halliday, to win which is to gain control of the virtual reality game all humans in 2047 play non-stop.

Just a nice lady having fun

Sounds like a strange future world. Might have been interesting to have explored it a bit. Not in this movie. Most of it takes place in the OASIS gamespace, a wholly CGI’d affair. Most of it is loud and ugly.

Except for the leads, Wade AKA Parzival and Samantha AKA Art3mis (Olivia Cooke), two attractive white kids destined for true love.

I love that as the movie begins, Wade tells us how, in the OASIS, anyone can be anything. Any monster, any animal, and living being whatsoever. And Wade? What wild and wonderous avatar has he chosen for himself? Wade turns himself into a non-threatening, stereotypically handsome and cool teenage boy. That’s some imagination you’ve got there, Wade. Can I be your friend?

Wade-as-Parzival meets Art3mis, a stereotypically hot teenage girl with perfect perky breasts and mad martial arts skills. Smitten, he wants to meet her in the real world. She warns him that she may be a very different person out there. He insists. 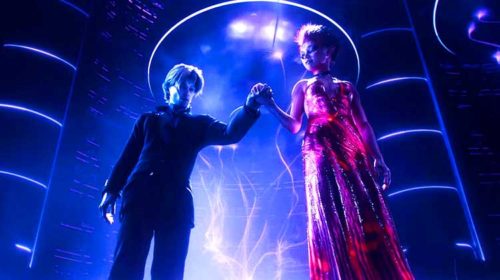 Note the cliché here. Wade’s not concerned about his real-world looks or his real-world poverty. No, it’s only the girl who’s worried about her true appearance. So what is she? A man? An old, fat Ethiopian man with one leg, shingles, and boils? No. She’s a magically hot teenager. Except, uh-oh: she has an almost invisible birthmark on her perfect face. DIE, MUTANT, DIE! Good luck finding a husband, honey. Welcome to life as a childless old maid, you disgusting she-beast.

But wait! Wade, prince that he is, sees past this slight discoloration, and all is well. What depth he shows, ignoring such a vile disfigurement.

Meanwhile, no mention is made of what Samantha thinks of Wade’s true appearance. He’s the hero, and, after all, he’s big enough to see past her hideous birth defect. She could hardly hope for anything better. Samantha starts out as a bad-ass, but by movie’s end her only purpose is to watch Wade do the hero thing. She’ll be at home cooking a steak and chilling a pitcher of martinis.

The Asian sidekick avatars turn out to be Asian real world kids. The only twist is when the OASIS’s big, manly Aech turns out to be a black woman. That’s exactly the extent of how forward thinking this movie is. 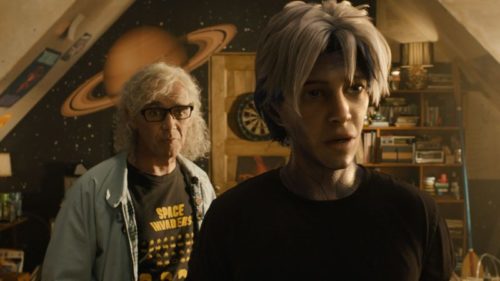 No characters grow or change in Ready Player One. Wade starts as the hero and ends as the hero. The evil corporation is evil from start to finish. The theme is the definition of irony. Our heroes extol the virtues of fighting the corporate ownership of the OASIS in a corporate-made movie based around licensed entertainment icons corporations have ensorceled us with since at least the 1930s.

No surprise there. It’s hard to find a modern, mega-budget movie the theme of which isn’t the power of individuality or fighting the good fight against our corporate overlords.

As head-scratching as anything else in Ready Player One is the choice of ’80s songs. I swear it’s a merciful act of god that “We Built This City” isn’t in it. Any movie that opens with “Jump” and closes with “We’re Not Gonna Take It” should be taken out behind the barn and shot before it infects the rest of the hogs. The songs feel like they were picked by an algorithm.

Which I guess that’s the other depressing thing about this ham-fisted nostalgia-wank: the movie itself has no love of ‘80s pop culture, music or otherwise. It just uses it. Spielberg is renowned for doing everything possible to ensure his movies are audience-pleasers, dramatic integrity be damned. But I don’t know that a Spielberg joint has ever felt this nakedly cynical (please note, I say this having erased the existence of Crystal Skull from my brain). It’s a movie that says to its audience, “Hey! You guys love all this ‘80s crap, right? Great—here comes the firehose—open wide. No, wider! WIDER, YA LOUSY BASTARDS! WIDER!”

5 responses on “Ready Player One? Thy Game Is Over”