Time does funny things to movies. Destroys past masterpieces. Mints classics out of duds. Give a movie, good or bad, classic or bomb, enough time, it’s just as likely to vanish as to become the basis for a new universe of billion dollar craptaculars. 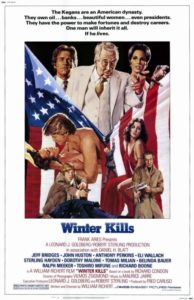 Then there’s Winter Kills. Released in 1979 as a scathing socio-political black comedy, it bombed, despite raving (definitely the right word) reviews by critics gobsmacked into feverish praise. Said Vincent Canby of the New York Times: “Ranks with Citizen Kane as the all-time great American movie!” Or so he’s quoted on the current ad copy for Winter Kills. I see elsewhere among the interwebs the quote running, “One of the all-time great American movies. Ranks with Citizen Kane as my number one favorite film.”

Either way, a quote like that, even from a fuddy-duddy as fuddy as Vincent “The Fud” Canby, who that same year dumped on Alien (to name but one example), is going to get my attention.

Next to turn one’s head? The cast. Jeff Bridges, John Huston, Anthony Perkins, Sterling Hayden, Toshiro Mifune, Dorothy Malone, Eli Wallach, Ralph Meeker, and (I discovered once I watched it) an uncredited Elizabeth Taylor. Granted, in ’79, you see a cast like this, you’d probably assume it was attached to The Towering Inferno 2: Electrical Fire Infernaloo. But still. You don’t pass up a movie starring both Sterling Hayden and Toshiro Mifune.

The pedigree of notables continues. It’s based on a book by Richard Condon, who wrote the novel The Manchurian Candidate, among other scathing (if not scattershot) satires of America, it’s shot by the great Vilmos Zsigmond, scored by Maurice Jarre, and written and directed by…

Okay, I’d never heard of William Richert. He’s made a handful of unremembered movies. Winter Kills, it seemed, was his unheralded masterpiece, his lost classic, the one that must be seen, the greatest American movie since Citizen Kane!

Winter Kills is, theoretically, a black comedy. But when I think “comedy,” I also think “laughter.”

For example, just-released The Death of Stalin is a black comedy. It’s so very bleak one might even pause in one’s laughter as a little voice in one’s head cries out, “Um, that’s actually the opposite of funny. That’s the most horrifying thing imaginable.” This is, after all, a movie in which one winds up rooting for Nikita Khrushchev. It helps that Nikita is played by Steve Buscemi, who is, as ever, fantastic. And yet, my goodness, Russian gulags! Rape! Murder! The fates of millions in the hands of petty, cruel narcissists! Well. I had a fun time. 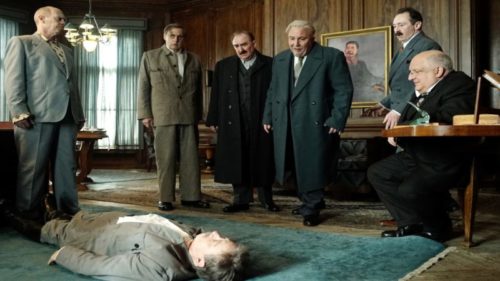 Meanwhile, as some kind of comedy, as any kind of comedy, Winter Kills fails, in that there’s nothing funny in it. Worse, and, perhaps, more mysterious, is that I couldn’t see where the funny was supposed to go. Tell a bad joke, it’s still a joke. It’s an unfunny joke. Where are the jokes in Winter Kills? What was I expected to laugh at? I have no idea.

No. I have one idea. Sterling Hayden is in one scene. Our hero, rich playboy Nick Kegan (Jeff Bridges), investigating the long-ago assassination of his brother, President Kegan, which as I’m sure you recall went down in 1960 in Philadelphia, drives into some open field to talk to some rich guy—and he’s chased by WWII era tanks! What the hey! Oh my, the hilarity! Tanks! In this day and age!

It is to laugh. Is it not? Correct. It is not. Sterling Hayden is the rich guy. He pops out of a tank and threatens to blow up Nick, while at the same time throwing him a few clue-shaped bones. So to speak.

Someone get this man a bottle of aquavit!

Clearly, this was a scene of high ironic comedy. I think? Something about the super-wealthy and their comic wargames? I’ll give it some thought. Maybe a chuckle will develop. Like, say, in a petri dish. I’ll feed it with glucose and sunlight and maybe, one day not long from now, it’ll sprout into a laugh.

Let’s return to the beginning. A bandaged up, almost dead somebody-or-other is delivered by helicopter to Nick and says with his dying breath that it was he who was the third, secret gunman who shot President Ke-mumble-mumble on that fateful day in—

Wait, who? So this is an alternate history thing? I found myself asking myself at the outset, because why would I make my wife watch this thing with me? I am not unkind. I don’t know, it’s a simple thing, the alternate history, but it took me a long time to make sense of it in this movie. The allusions to Kennedy hammer one over the head. Joe Diamond instead of Jack Ruby, Philly instead of Dallas, ’60 instead of ’63, some poor suicidal actress who isn’t quite Marilyn Monroe, the something-something commission hiding the dire reality of the plot to murder the Pres, etc. and so on and on.

But then who the hell is apolitical Nick? His father, Pa Kegan (John Huston), looks like he stepped right out of Chinatown, so much so I thought, okay, clearly this rich fucker had his own son the President killed (or impregnated? and Nick is the son of—? wait, I’m losing my chain of thought…), which—spolier!—he did. Have his own son, the presidency for whom he’d previously bought, killed. I just didn’t realize that this was supposed to be surprising.

I don’t know, were we that much more innocent in ’79? Was the idea of billionaires running the government as they see fit so recherché a concept it counted as the most gleeful of blackest black comedy fodder? Critics thought so. Audiences yawned and ponied up to see The Jerk again. Because, let’s be honest here: he hates these cans!

Certainly Pa Kegan didn’t pull the trigger himself. With regards the assassination. It was handled, practically speaking, by a bunch of mobsters. Ha! Mobsters! Nick unearths them without much trouble, and every one of them talks like, “Oh, what? That whole president thing? Sure, yeah, Jimmy the Knife got me in on that deal, said I had to off a guy, and I’m thinking, jeez, off a guy, ain’t that a shame, you sure you can’t find someone else? But no, it hadda be me, cause of it being the President and all, so sure, I was one of the shooters. You should talk to Mikey Two Shoes, he’s the one who hired everybody. Here’s his number.”

Chatting up the mob

Wait. Is that supposed to be funny? That it’s Eil Wallach and some gangster guys who did in “Kennedy”? And nobody told them it’s supposed to be a conspiracy they might want to stay mum about? Maybe. Maybe it is. It plays as stupid. But maybe stupid, in this case, is funny. It’s just, why wasn’t anyone juggling cats? Cat juggling. Now there’s comedy you know is comedy.

I just couldn’t wrap my head around this thing. Nick, he’s got this girlfriend, sort of. Maybe he just met her. They have loud sweaty sex, but when he returns to her apartment—she was never there! Ah, so it was all a set-up, his having met this woman sometime before the movie started in a scene we never saw, which woman never shows up again, and has no bearing on the plot.

Also, there’s this dreamy woman riding a bicycle with a little kid on the back who blows kisses to Nick every time someone dies. I mean she’s always there, passing on her bike, blowing him a kiss right when people get shot and buildings blow up. Is she the one killing everyone? Or wait, maybe she’s protecting Nick? His guardian angel? Hired by Pa to keep safe his dumb son?

Then we come to Anthony Perkins. He exists in a massive, futuristic space set repurposed from The Black Hole and shot from reverse angles. Or so I have just now concluded. Perkins is some kind of Machiavellian, all-seeing mastermind in the employ of Pa. His future-tech is able to spy on everyone, listen to all their phone calls, know everything they do at all times. The NSA, in other words. Or Facebook. Let’s call him Zuckerberg. Maybe Zuckerberg killed the President on his own. Or maybe Pa told him to. Or maybe the forces of the universe are in charge, doing what they will with us, their human pawns, in a game we shall never understand!

Whew. I’d better slow down. I fear I’ve made this movie sound like the best thing since cheez doodles. Sad to say, it’s not bad enough to be that good. Bridges and Huston give it their all. Perkins looks like he’s having at least as much fun as he had in The Black Hole. Mifune is wasted as a butler. Hayden isn’t nearly drunk enough (see The Long Goodbye for some mighty fine, late-career drunken Hayden). Nobody else stands out. The story-telling is, at best, baffling, at worst clunky and illogical, full of flashbacks and too many characters and a laundry list of names you’ll never remember.

As for any satirical point, it is lost on me. Politics is money? Rich guys pay the mob to do their dirty work? Conspiracies are boring? All that and less.

Or no, wait. It’s not hilarious. Right. There are no jokes.

Director Richert says his movie failed because the studio pulled it from theaters. Why? Political pressure. The Kennedys were not amused. This sounds like what a director says when their movie no one wanted to see fails to make any money, but then again, if there’s any industry more inane, venal, and peopled by short-sighted-egomaniacs than Hollywood, it’s politics. Maybe Winter Kills was too dangerous to be released. Maybe it hits too close to home. Maybe the conspiracy is real. Maybe Kennedy was actually—

Whoa. It’s like I’m asking for a serious case of lead poisoning here, if you catch my drift. Winter Kills is fiction, my friends. Imaginary. In fact, for your own safety, I’d suggest you pretend you never heard of it. 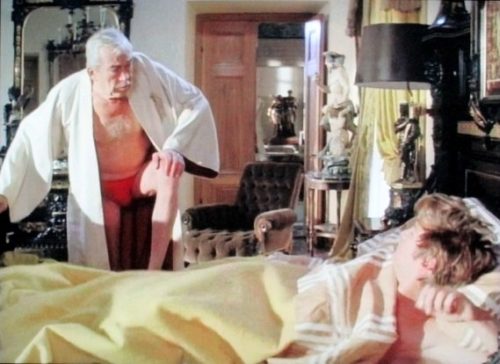 Sorry, but since I can never unsee this image, it’s only fair that you can’t, either.

2 responses on “Winter Kills, In Which A Forgotten Bomb Is Unearthed—And Blows Up In My Face”