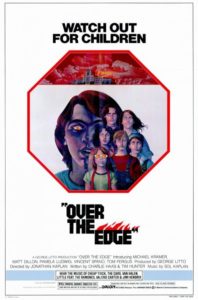 Ignored on its release in 1979, Over the Edge, a story of bored teenagers living in an anonymous planned community of bland townhouses, was rediscovered a couple of years later at a New York film festival, found a home on cable stations in the ‘80s, and has since become something of an underground classic. Kurt Cobain used to go on about how it defined his life. Richard Linklater says its naturalism and realism influenced Dazed and Confused. Matt Dillon, a 14 year old punk kid who’d never acted, was discovered cutting class at school and cast in the role of Richie, the kid from the wrong side of the tracks. If there were tracks in New Granada. There aren’t. There’s nothing in New Granada, nothing but kids with nothing to do.

The kids in Over the Edge aren’t the kind of kids you find in the ‘80s movies of John Hughes. Or any other ‘70s/‘80s movies, for that matter. Even in the more salacious teenage movies of the era, like Class of 1984, the kids are playing kids. Crazed and evil or dopey and innocent, however believable their performances, they’re actors acting.

Charlie Haas (just out of film school, he’d go on to write Gremlins 2 and Matinee for Joe Dante) and Tim Hunter (who would go on to direct River’s Edge and tons of TV, including Twin Peaks, Mad Men, and Breaking Bad) wrote the script, inspired by an early ‘70s article about Foster City, a new, planned community just south of San Francisco, and its dreadful teenage vandalism problem. It was the kind of fear-stoking article about the youth rising up to kill us that led to any number of teenage gang films of the later ‘70s and early ‘80s, movies like The Warriors and The Wanderers and Class of 1984. 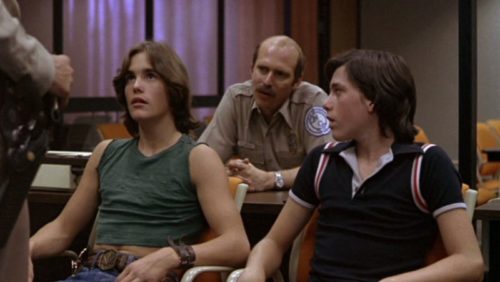 Harassed by the man

In fact, it was movies like The Warriors, and what let’s call the lively reactions of teenage audiences, that caused Orion to pull Over the Edge from theaters after only a brief and tiny release. They were afraid of riots breaking out in theaters (echoes of ’55, when Blackboard Jungle hit screens…the more things change…).

The problem with these planned communities was that, despite a quarter of their populations being under 18, there was nothing for kids to do. If you don’t give kids somewhere to go, a place to hang out, anything at all to do with their time, they will find something to do with their time. And that something will certainly come from their frustration with having nothing to do. And that frustration will lead to blowing things up, burning things down, stealing things, breaking things, shooting things, drinking, drugging, and fucking. Ya know, bein’ kids. Wheee!

Though shot in a mere 20 days for a low, low budget, it’s filmed and edited with purpose and style. There’s nothing showy in here, but compared to many low budget movies of the era, or any era, it shines. The most notable shot is one hell of lucky one, at sunrise, a beautiful sky half covered in orange clouds and a line of smoke rising from a distant fire. 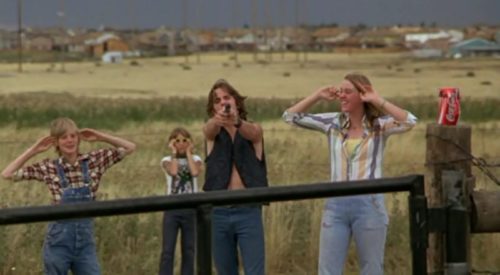 Little happens in Over the Edge. It was the ‘70s, that glorious era of plotless, naturalistic character pieces, where the story is the characters, and the characters are lost and looking for what, they don’t know.

Carl (Michael Eric Kramer) is a smart kid, but he hangs out with Richie and Claude (Tom Fergus), the former a switch-blade wielding punk, the latter a weird skinny dude who smokes hash and drops acid at school—by mistake. He thought it was speed. Doh!

Carl has a thing for a pretty girl, Cory (Pamela Ludwig), who’s vaguely going with Mark (Vincent Spano), a more geniune troublemaker known for shooting police cars with a BB gun—while they’re driving down the freeway. Cops hate that. Especially Sgt. Doberman (Harry Northrup). Doberman (ha ha) hates kids in general, but he hates Richie most of all.

The kids have one place they can hang out, a little rec center run by twenty-something Julie (Julia Pomeroy), who, unlike every other adult in town, doesn’t think more policing, more arrests, and stricter curfews will make the childrens behave. No one pays her any attention. Story of the world. 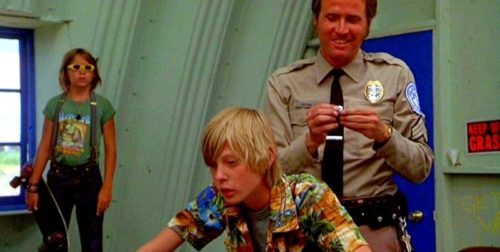 The kids wander around, cause minor trouble, make out, rob a house and find a gun (uh oh), and the trouble builds, and tempers flare, and in the end? In the end there’s a wonderfully big movie finale. It’s over the top, but just. And coming at the end of a film that feels so real and naturalistic, the over the top end feels, in a sense, real and naturalistic too. It’s the end that real kids dream about.

The kids in the movie are real kids. Few of them had acting experience. They spend the movie hanging out, talking shit, and barely doing anything, because there’s nothing to do, until the end, when what needs to be done is all there is that’s left to do.

The director, Jonathan Kaplan, wanted to end the movie with The Who’s “Teenage Wasteland,” which would have been perfect. But they couldn’t afford The Who. The producer picked a more uplifting song. It’s quite terrible. A bit of soft, gentle, late ‘70s muzak about things getting better. Only in the ‘70s. Fortunately, the rest of the soundtrack is full of far more effective songs by the likes of Hendrix, Cheap Trick, The Cars, and The Ramones.

Over the Edge remains a kind of lost classic. It’s worth discovering. What else have you got to do? 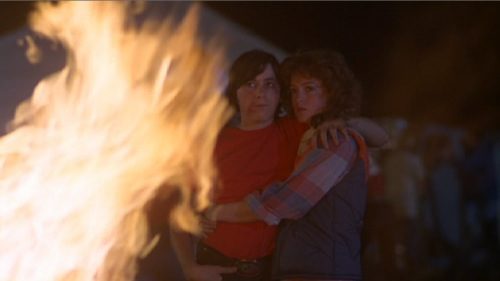 5 responses on “Over the Edge, or: The Terror of the Bored Teenager”