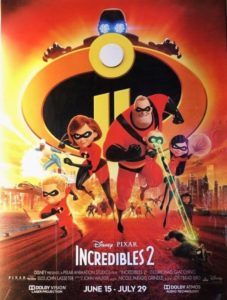 Superheroes. Will we ever tire of them? What’s that? We have? We’ve been running on superhero fumes for years now? What about flammable, laser-eyed demon-babies? Are we sick of them yet? No? Good. At least Incredibles 2 has something new to offer. It’s no spoiler to tell you that the best scene in the movie is baby vs. raccoon. Nothing else comes close. Or if it does, that something else is another scene starring the flammable, laser-eyed demon-baby.

Writer/director Brad Bird has been cruising the interview circuit relating his struggles writing Incredibles 2 over the years since the first one made such a deserved splash, explaining that even after Pixar had greenlit the sequel he found himself rewriting and rewriting again. The central bee in his bonnet was the villian. Apparently it had something to do with A.I. until he realized it wasn’t working. Yet there they were, already making the movie, and Bird didn’t know who his superfamily was up against.

Which on the one hand, okay, these movies, unlike typical superhero paint-by-numbers stories, aren’t really about villians, they’re Pixar movies, they’re about a family learning to work together. On the other hand, Incredibles 2 is, despite itself, still a superhero movie, there’s still a villian to fight, and can you guess what the weakest part of this sequel is? 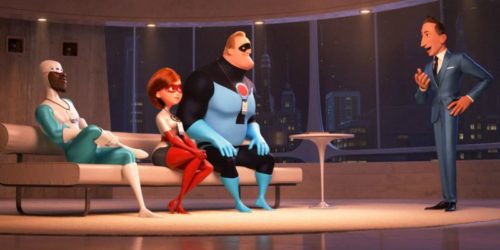 The villian is a total snooze, is barely part of the story, has a secret identity only secret if, say, you’re eight and haven’t seen any superhero movies before, and, because, as Bird well knows, his movie isn’t about the villian, functions only as a storytelling tool to get a family working together again.

Stranger still, the villian’s raison d’être is the very same as Syndrome’s from the first movie. The villian hates superheros in general because blah blah childhood trauma blah blah, wants to destroy them all, and to do so, tricks one of the Parrs, Elastigirl this time, into thinking she’s needed to fight an evildoer, when in fact it’s all part of the evildoer’s nefarious scheme. Sound familiar?

Such an adorable baby…

Given Bird’s last-minute changes and last-minute struggles with the script, maybe it’s not suprising he wound up replaying what worked the first time.

And it did work the first time. It worked so well that, done anew, it’s still reasonably diverting. But it’s all a bit tired, a bit forced, a bit long, a bit underwhelming. So, yes. It’s a bit of a sequel. One hoped for more. A surprise, for example. A single surprise. That’s what Incredibles 2 needs and what it fails to deliver. It brings some laughs, some laser-eyed baby joys, plenty of lovely design and top-notch animation, but is any of that surprising?

Speaking of which, what about this family-learning-to-work-together theme? Didn’t they learn this lesson the first time out? Incredibles 2 picks up exactly where the first movie ended. Why not take the story in a new direction with a new theme? Why not surprise us? How many times does this family need to learn how to work together, anyway? I think we get it. I think they get it.

I think I’m running out of surprising things to say about this movie. If you’ve seen The Incredibles, which surely you have, that movie is wonderful, you know literally everything that happens in the sequel. It just happens different this time. Except when it doesn’t. 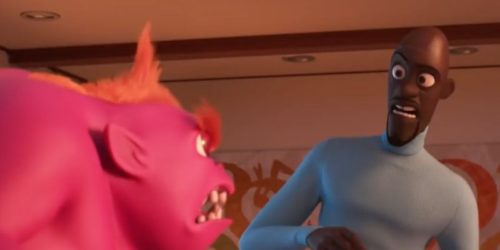 2 responses on “Incredibles 2 Is A Bit Too Credible”