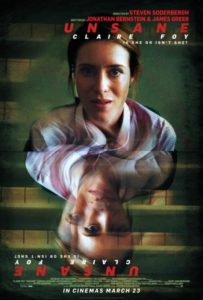 If nothing else, his every experiment is worth watching to appreciate the experimentation. When blessed with a good script, his resulting movies are brilliant. When the scripts are lousy, the movies suffer. But at least one can always marvel at his compositions, his lighting, his editing.

In July of 2017, in secret (a neat trick in this internetted world of ours), Soderbergh shot Unsane on an iPhone 7 Plus in 4K. In terms of shot framing, lighting, and editing, is it better than most multi-million dollar studio movies? You bet it is. It doesn’t look great, in the sense that 35mm film and professional lighting looks great, but every shot is carefully chosen, and, as ever with Soderbergh, he uses the limitations of his chosen medium to their best advantage.

In the movie’s most striking scene, Sawyer (Claire Foy), involuntarily committed to Highland Creek Behavioral Center, is dosed with methylphenidate and freaks out. Soderbergh achieves her POV of the experience by overlapping two (or more?) skittering, bright shots, almost like when people take a famous movie (The Shining, say) and run two reels on top of each other to see what weird synchonies result. It is, to understate it, disorienting. 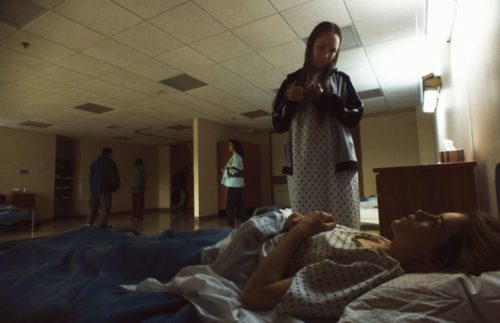 Mind if I stand here watching you sleep?

It is unfortunate, then, that, as a whole, Unsane is less disorienting than one might have hoped.

We meet Sawyer at a new job in a new city. She’s not insane, but she’s not doing so hot. She left her home in Boston due to a stalker, and still “sees” him around every corner. She talks to a counselor at Highland Creek, signs some papers, and what do you know, it seems she’s committed herself. They won’t let her go.

The way this bit of business unfolds is a bit dodgy. It’s somewhat unclear what Sawyer knows. On the one hand, she clearly doesn’t understand that she’s signed herself into their hands, yet she accedes to their demands with an odd lack of defiance. Maybe it’s supposed to be confused in this way?

It might be. How sincerely nuts Sawyer is is left open. At fist she seems only to be a woman in need of a good therapist. But no sooner is she committed than she acts out violently and, more alarming still, becomes convinced one of the staff is her stalker, come to hunt her down.

Well, but then again, is this guy her actual stalker? 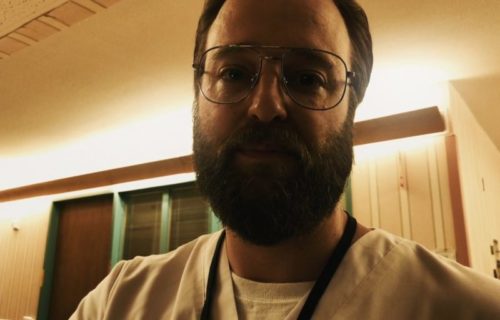 Unsane could have benefitted from keeping one guessing longer than it does. I won’t give it away here, but there’s not much to give away. What’s going on is made clear early on, after which Unsane jumps back and forth over the line of “intense genre exercise” and “uncomfortable joy at watching a woman suffer.” Put another way, I found the movie to be, overall, a decent little genre exercise, if unmemorable outside of Soderbergh’s direction. Whereas my wife was ultimately upset by what she saw as yet another movie about a woman abused by a crazy asshole where the filmmakers seem to be getting off on her suffering. Put that way, she has a point.

Unsane is certainly not as questionable as, say, Natural Born Killers in this regard (Stone’s movie being one of those where the audience is lectured for liking violent images in a movie whose only pleasures lie in getting off on violent images), but the script (by Jonathan Bernstein and James Greer) isn’t knowing enough to understand where and how it crosses the line.

Unsane, then, might be chalked up as another in a long line of Soderbergh’s interesting experiments. It’s better than Contagion, but maybe on a par with Side Effects? Somewhere in there. The Limey it ain’t. 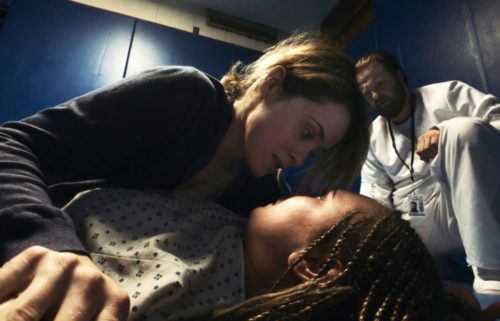 Friendly chat in a rubber room

Also on the plus side are the performances. In the lead, Foy captures a woman on the edge well enough that her sanity is open to question. Half the time she’s like any number of emotionally fragile people in your life, the other half she has you saying, oh, wait, this one’s cracked.

Jay Pharoah plays Nate, who befriends Sawyer early on and explains the scam the Center is running (you mention the word “suicide”, they can involuntarily commit you for up to seven days or until your insurance stops paying). He seems so obviously sane and, with his notebook, a reporter planted to write an expose, you almost imagine it must be a fakeout. In this movie, no. Everything is pretty much as it seems.

Joshua Leonard plays the stalker with exactly the affectless, calm friendliness most likely to freak you out, Amy Irving shows up as Sawyer’s mother, and Juno Temple is on hand as a true nut to torment poor Sawyer.

In the tiny world of movies shot on iPhones, I liked Tangerine better, but Soderbergh is still Soderbergh, and I get a thrill just watching how he frames shots, uses whatever light is on hand, and edits. Along with the performances, Soderbergh’s experimentation makes Unsane worth watching, at least for me. Beyond such aesthetic concerns, your mileage may vary.

2 responses on “If Unsane Is Not Insane, Neither Is It Normal”