UPDATE!: In news that asplodes heads around the nation, it has been revealed that non other than Yorgos Lanthimos has now signed on to direct The Hawkline Monster. What will become of this? None can say. Except the monster, perhaps, and the shadow of The Chemicals. 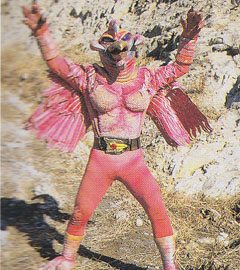 The Hawkline Monster certainly sounds like a good title for a film. You hear the name and picture, perhaps, a vicious bird-like creature in pink tights, desperate for a go at your tender bits. Or maybe it’s a slobbery, half-decomposed fiend lurking in the laundry hamper, waiting to feed on your soiled clothing and exposed flesh.

The truth is much much worse. 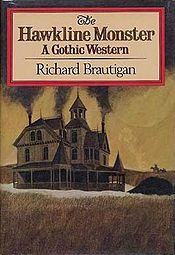 The creature springs from a book by weirdo writer Richard Brautigan, known for his stream-of-altered-consciousness poetry and prose. Despite the monster’s literary pedigree, regardless of the investment and commitment devoted to him, ignoring the fact that respected directors Hal Ashby and Tim Burton tried for decades to make this book into a motion picture — with willing leads including Jack Nicholson and Dustin Hoffman; Nicholson and Harry Dean Stanton; Beau and Jeff Bridges; and Nicholson and Clint Eastwood  — this book is just plain unfilmable.

This I know. I read the whole thing yesterday in about an hour. Unavailable from the library, unfindable at any local bookstore, I ordered a used copy on-line for $1.99 plus $3.99 shipping. To my surprise, I received a hard-backed first edition in fine shape. I opened it up at 4:30 in the afternoon thinking I’d have a peek and didn’t put the thing down until I finished it. 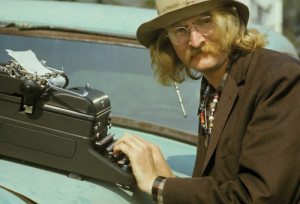 The Hawkline Monster? No, that’s just Brautigan and his old nose.

I know why Hal Ashby and Tim Burton and Jack Nicholson and all them fellas wanted to make this into a movie. It is because it is damned fantastic. It’s because it’s unfilmable.

Yes, yes. Pundits have called books unfilmable before and been proved wrong. They called Cloud Atlas unfilmable, and they were only technically incorrect. People said Naked Lunch couldn’t make the transition to screen, and it didn’t without some liberal blending of Burrough’s biography with his fiction plus the immense talents of David Cronenberg. The Life and Times of Tristram Shandy likewise could never make a film, even though they filmed it, sort of. These books and others like them are complicated, long, and/or full of literary flights impossible to display.

They would be too expensive to film, or too lengthy to watch, or impossible to translate to the screen without changing the book so much that it was no longer the book.

Even so — as difficult as it was to picture before the above named films came out — you could read those books and in some way imagine them as movies. You might think that they would make crazy films, or boring films, but you could see them as films in your headscreen so long as you ignored practical considerations like budget and audience comprehension and talking typewriter-bug-assholes. 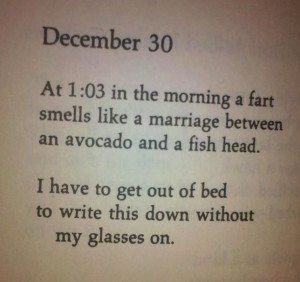 This is a poem. It might make a good movie.

Richard Brautigan’s The Hawkline Monster is another kettle of sheep.

Hal Ashby first optioned the rights to the novella when it was published in 1974. For those too lazy to open IMDB, I’ll happily inform you that this was after Ashby had released The Last Detail but before he made Shampoo. (Detail being his third film after The Landlord and Harold and Maude.)

Ashby repeatedly and unsuccessfully tried to get The Hawkline Monster made for fifteen years. He had Brautigan write a script, which wasn’t up to snuff, and the author declined to write a second draft. Other writers worked on it, too. Then Brautigan and Ashby died and Tim Burton had his own swing at it, with Jack Nicholson still game to play one of the leads.

And yet there the Hawkline Monster sits, unrecognized in the corner. It’s not even welcome in a public library. Won’t you consider paying attention to him? Wouldn’t you like to try to make him a movie star?

Before you decide, please allow me to acquaint you with him thoroughly. (Or, if you’d like to read the book yourself, which I recommend doing, I’ll lend it to you for an hour.)

The Hawkline Monster begins in Hawaii in 1902. Greer and Cameron, two intimidatingly nonchalant hired killers, decline to kill a man who is teaching his son to ride a horse, because they don’t do that sort of thing. Instead, they take the boat right back to San Francisco and Cameron counts the number of times he throws up, because counting things is what Cameron does. 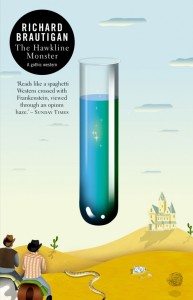 In San Francisco, the partners kill a Chinaman and then do a bunch of whoring, because they do that sort of thing. Then a silent, luminously beautiful Indian girl finds them mid-fuck and gives them $5,000 to follow her out to Eastern Oregon, even though she’s not an Indian. In Oregon, the girl, named Magic Child, starts talking but doesn’t say too much. They travel through towns embroiled in a war between sheep owners and the Morning County Sheepshooters Association, which thinks shooting sheep is A-ok. Also in there, the stagecoach stops off at a local widow’s house so the passengers can enjoy some coffee and donuts and the driver can have some sex.

A word here about the format of The Hawkline Monster. The book is broken into chapters, each averaging about a page and half long with a title. The title accurately describes what occurs in the chapter in a misleading way, so what you expect both does and does not come to pass. Brautigan’s language is sparse and playful. He apes the Western genre to disorienting effect, spinning characters and scenarios you recognize as distorted versions of the norm. There is something about the simplicity of his writing that makes its off-kilter content run down your legs to affect your stability.

For example, after Greer and Cameron are easily seduced in unison by Magic Child in a barn filled with the most pathetic horses imaginable, they head off on an illegibly scrawled road to Miss Hawkline’s house. Miss Hawkline being the woman who charged Magic Child to hire their murderous services for as yet unexplained reasons. The road leads through the Dead Hills and to the following passage: 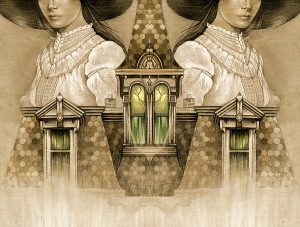 When Greer and Cameron and Magic Child reach the Hawkline manor, it is a massive Victorian in the middle of nowhere surrounded by a field of ice. Miss Hawkline, who is identical to Magic Child, invites them in and tells them the house is over ice caves, thus the cold. As they eat breakfast, Magic Child changes her clothes to an outfit identical to Miss Hawkline’s. When the killers look away they can no longer distinguish Magic Child from Miss Hawkline and the two women are content to answer to the same name.

Miss Hawklines tell Cameron and Greer about their father, a Harvard scientist, who was working on a grand experiment called The Chemicals, which would answer the ultimate question of mankind. Alas, he was killed by a monster, which now lives in the ice caves below the laboratory below the house. It makes a noise like “the combination of water being poured into a glass, a dog barking, and the muttering of a drunk parrot. And very, very loud.”

It is very difficult for the quartet to exchange this information as strange things keep occurring. Their conversation gets sidetracked in bizarre, out of control ways as their brains are manipulated by the Monster. The Miss Hawklines tell of other pranks the Monster pulls on them; stealing their clothes off their backs, filling their shoes with green feathers, etc. Finally the story finds its way out and the killers feel no need to delay their assigned duty. And yet they do. 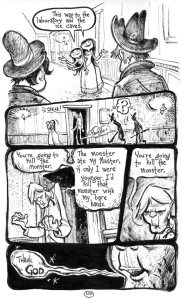 The butler, Mr. Morgan, returns. He is 7-feet tall and 300 pounds. He was fetching items for use in the experiment of The Chemicals, which the sisters are continuing in their father’s name. Unfortunately, he dies sprawled in the hall and the Miss Hawklines insist that now is a good time for fornication. After the rumpty-pumpty they are confused as to why they wanted to have sex instead of showing their beloved butler respect in death. It is at this point that Greer notices an odd, moving light followed by an equally odd shadow.

This is the Hawkline Monster. It was created by electricity being coursed through The Chemicals and has turned to evil and power. Its shadow, however, is good-hearted but impotent. Separately the killers come to realize that this is what is tormenting them, and not some giant beastie in the basement. One Miss Hawkline finds Indian attire in her closet and has no idea how it got there. They bury Mr. Morgan in a suitcase, as the Hawkline Monster has turned him into a dwarf. Then they convince the Miss Hawklines that they need to destroy The Chemicals in order to kill the Monster. Reluctantly, they agree.

Meanwhile, the Monster has hatched an evil plot to turn all four humans into its shadows. It lurks in the basement while its sad shadow wishes it could do something else but follow the Monster around. As the quartet nears the laboratory door, one Miss Hawkline realizes that the elephant-foot umbrella-stand is actually her father. And so it is.

Greer and Cameron descend into the basement to confront the Hawkline Monster. At a crucial moment, the Shadow figures out how to move in front of the Monster, and thus blocks its view. This gives Cameron time to dump a glass of whiskey into the jar of Chemicals. The Chemicals erupts into blue sparks, turning the Monster into blue diamonds and burning down the house.

Mr. Hawkline transforms from an elephant-foot umbrella-stand into Mr. Hawkline. Mr. Morgan becomes a giant again and comes back to life, erupting out of the ground with bits of suitcase in his hair. The Hawkline twins remember their first names (Susan; Jane). The house burns, melting the ice caves and creating a lake. Cameron dives in and gets the diamonds and their shadows.

Then Greer and Cameron each pair off with a Hawkline sister but it doesn’t work out. 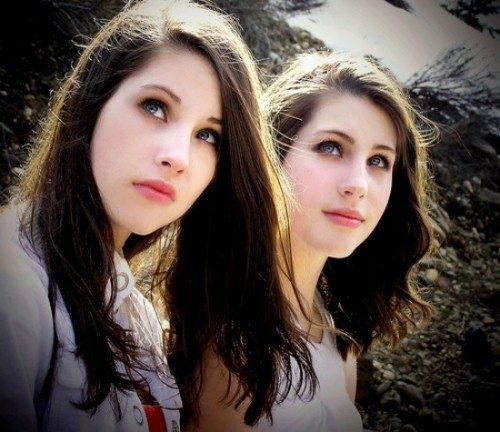 Which one is Magic Child? I don’t remember.

So, clearly, you see why Hal Ashby and Tim Burton wanted to make this story into a film. It makes no end of sense and is chock full of transcendent meaning. Although on a surface level it appears to be anti-science with The Chemicals attempting to destroy man, let’s not forget that the Shadow of that rogue experiment was decent to the bitter end. Also, they got donuts while the widow slept with the stagecoach driver and there were a bunch of dead sheep and then there was that bit about the town marshal, Jack Williams, which I didn’t bother describing.

These situations — all easily made visual, especially the stuff about the Monster — escape the normal constraints which inhibit the translation of literary style to screen. Wait. Scratch that. Reverse it.

But then… What if Eddie Murphy played the Hawkline Monster and we could get Chow Yun Fat for Greer, let Jack Nicholson play Cameron, and cast a stale Cinnabon as Mr. Morgan? Both Hawkline sisters could be played by Veronica Lake and/or Queen Latifah.