Fast cars, hot ninja vixens, giant exploding balls of muscle, tanks jumping over airplanes on crutches whilst whistling Dixie, Vin Diesel in a unitard oiled up and — defying the laws of the physical universe — snarling out of both sides of his mouth simultaneously! I ask you: What’s not to love about Fast & Furious 6? 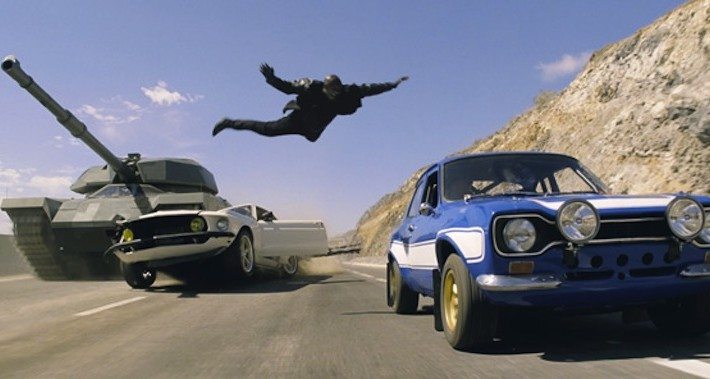 Why you should always keep your keys in your back pocket.

Although, to be honest, I have not precisely seen this movie. Nor will I. I have seen the trailer, though, and I bet there’s little that montage omits but some dialogue between Vin Diesel and the Rock. Surely hearing that is worth $10.50?

Also, while I am being honest, I have not seen any of the Fast & Furious films. I am also also neither fast nor furious. I am kind of pokey and just generally irritable.

Since, however, this weekend marks the opening of Fast & Furious 6, I thought I should write a little something about great movies that take fast and furious to the max and which are actually — defying the laws of the physical universe — still unmissable in some substantive way. 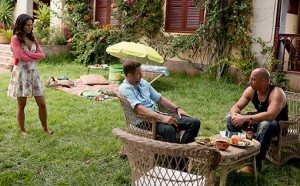 This garden party is getting uncomfortably furious. Please finish your cucumber sandwich and go.

So skip seeing Hollywood’s latest primer on road rage and instead check out one of these six fine films which you will both enjoy much more than Fast & Furious 6 and actually remember watching after the credits stop rolling.

Plus, as a bonus, these films have very few Vins Diesel in them.

[That’s not a typo. I think that’s how his name should be pluralized, like Attorneys General or passersby. Vins Diesel. I’m right, right?]

You want fast? How about ragtime fast? Yeah, buddy. I said ragtime fast and that’s so fast you can’t even see them piano player’s fingers move across the keys. How about a film as fast as con men pulling a fast one on dastardly dickhead Doyle Lonnegan, played by Mind Control favorite Robert Shaw. 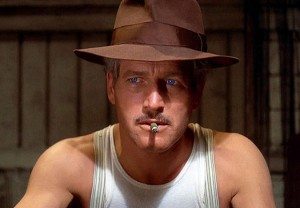 I’m so fast I can grab the sparkle right out of your eyes. First I need nitrous oxide though. Nitrous oxide for everyone!

If you haven’t seen The Sting, this is the second best Robert Redford / Paul Newman film out there. The leads play grifters who avenge the murder of Redford’s pal by taking Lonnegan for an expensive ride. Why? Because they’re furious. They’re fast and they’re furious. Also, they’re pretty funny and sexy and debonair. This is the sort of con men movie that other con men movies want to cuddle up to. It’s got more layers than a poultry farm.

Also, as if that weren’t enough, the script for this film was found in the slush pile and touted by then producer’s assistant Rob Cohen… who then went on to direct The Fast and the Furious. If it weren’t for The Sting, Cohen never would have been a director and Vin Diesel’s mother would have eloped with Jack Palance and had a passel of stoats instead of children, and that’s a fact.

Fast: You just try to catch them
Furious: With cause, brother. With cause.
# of Vins Diesel: Just one zygote in Rob Cohen’s pocket (off-screen)

Hell in the Pacific

If frighteningly fast is appealing to you, how about getting stuck fast on a teeny little island in the middle of the Pacific Ocean with only an enemy soldier for company? That’d make you pretty furious, wouldn’t it? Yeah. I thought so.

In this overlooked gem from director John “Zardoz” Boorman, Lee Marvin and Toshiro Mifune face off over a small stretch of sand, hoping for rescue and the other man’s defeat. Marvin’s an American pilot and Mifune’s a marooned Japanese navy captain and World War II ain’t over. So whatcha gonna do? GO FISH!

Hell in the Pacific is light on dialogue and heavy on atmosphere. It makes that Tom Hanks film about lonely volleyballs look like meringue. Castaway has no second act and this one, it’s all second act. It’s all building drama and desperate maneuvers. Then, I’ll be honest with you, it ends like a bowling ball dropped from space. There’s an alternate ending on the DVD that’s a little better, but not much. It doesn’t matter though: Lee Marvin! Toshiro Mifune! John Boorman! Fast and furious fish!

Fast: You can’t get stuck faster without cement shoes
Furious: I’m still pissed
# of Vins Diesel: There is a thin film of Vin Diesel on the sea if you look close

Hey there, little lady, not so fast. Whoa. Easy. Wait. I mean, urf… don’t stop. I’ll do whatever you want even if you are a sociopathic suburban trampasaurus.

In Suburban Mayhem, young Katrina (Emily Barclay) takes fast and furious seriously. All she wants is her inheritance and her bro out of prison, and if she’s got to convince you to kill her dad to make that happen, well, so be it. Take off your pants. Or don’t bother, she’s already done manipulating you and moved on to suitor number two. 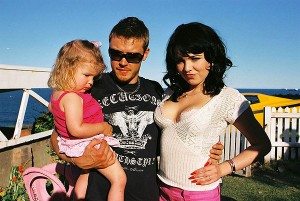 I have class out the wazoo.

Chances are, you’re not Australian and you didn’t see Suburban Mayhem. Too bad, mate, as it’s one hell of a ride. It is the film that most made me need a stiff drink after watching it, second to only About Schmidt. While it’s been a while, when I think fast and furious, I still recall Suburban Mayhem.

You want to hold up a convenience store with a sword? You want young(er) Mia Wasikowska to shove around? You want patricide and villainy and reckless motherhood and some true crime, small town, nineteen year old explosive sociopathic A-bomb? You want Suburban Mayhem.

Fast: So fast you didn’t even finish
Furious: More unhinged than furious, but it’s a blurry line
# of Vins Diesel: All of the Vins Diesel in Australia, which now that I think of it, is quite a few

Provisional Irish Republican Army political prisoner Bobby Sands fasted for 66 days in the British prison known as The Maze. Then he died of hunger. That’s a furious fast and there’s no denying it. 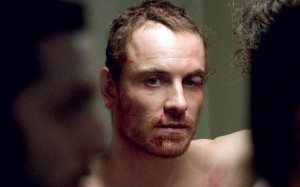 This photo is not funny.

Director Steve McQueen recently made a film about Sands, called Hunger, starring Michael Fassbinder in the title role. Unsurprisingly, it is an intense watch proffering little in the way of explanation or exposition. Surprisingly, it’s quite beautiful in a painful way and exceptionally hypnotic and moving, even as you’re watching men smear their own feces on the walls of their cells. Why do they do this? Because they’re furious — with the British government, with their jailers, with the lack of political freedom in occupied Ireland.

I would not in any way recommend you go as fast as Bobby Sands. Still, the man is a true martyr. With his death, and the death of his compatriots, the Crown folded, giving these men the rights of political prisoners, if not the official recognition. I suppose if you were hoping for a film in which some asshole uses nitrous oxide to race his muscle car through a bank vault while leaping off the space shuttle into a laundry basket you might find this film slow. It’s not slow. It gives fast new meaning.

Fast: None faster
Furious: That kind of calm anger than scares the pants off you
# of Vins Diesel: Vin Diesel wouldn’t have lasted 6 seconds in this film

You know who’s really fast? Syndrome, that’s who. He’s so fast — quick minded that is — that it takes an entire family of super folk to stop his furious evil schemes. Yeah. If it weren’t for Mister Incredible and his clan we’d all be groveling under the boots of our fast and furious overlord, Syndrome. And maybe the Underminer, too.

People often go on and on about which Pixar film is their favorite. Most of them are wrong: their favorite is The Incredibles even if they do not accept this in their hearts. It’s a perfectly structured story with instantly identifiable characters who somehow, magically, avoid being cliché. The mod-60s look makes James Bond jealous and on top of that it’s hilarious and thrilling and moving and has Holly Hunter in it. So yes. You love The Incredibles even if you haven’t seen it yet.

One of these days I’ll write a whole lot about why this film is worth its weight in lycra and glitter but until then, remember: no capes.

Fast: Faster than giant robot spider ball!
Furious: Rejection hurts, doesn’t it?
# of Vins Diesel: Director Brad Bird does the voice of Edna Mode but Vin Diesel only does the voice of loneliness and despair and sweaty underthings

Okay, fine. You want some traditional fast and furious? You want thundering muscle cars and chase scenes and a naked chick on a motorcycle? You got it. Vanishing Point is fast enough to make it to San Francisco by 3:00 pm on Saturday, even after 3:00 pm on Saturday, if you know what I mean and I’m not sure that I do.

In this picture a delivery driver named Kowalski (Barry Newman) decides that after driving all the way to Denver non-stop, he’s going to immediately turn around and drive a 1970 Dodge Challenger R/T straight back to S.F. Why? Fuck you, that’s why. He chomps some reds, bets a buddy he’ll be there by 3:00 on Saturday, and burns rubber. And that’s the movie. Kowalski vs everything that could possibly slow Kowalski down.

While that may sound like a humorless version of Smokey and the Bandit, there’s something about Vanishing Point that makes it compelling and, yes, unmissable. Part of that is the film’s existentialist pulse, another part is Cleavon Little as the blind DJ Super Soul who urges Kowalski on, and part of it is just fast and furious driving and stunts that could and did actually happen.

Fast: Screw Chris Pine and Denzel Washington: Kowalski is unstoppable
Furious: See above
# of Vins Diesel: Nary a one

And that’s it. Don’t you feel better about not going to see Fast & Furious 6 now? If not, just watch the trailer three times in a row while someone sits next to you sending texts and kicking your seat. Also, make up some good dialogue between the Rock and Vin Diesel for us and post it in the comments.

5 responses on “The Unmissable Fast & Furious 6”