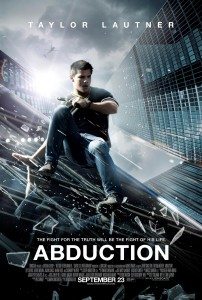 Even without specific interest in Taylor Laughtner, you might hover your mouse over Abduction (2011), aware of its young lead’s several lines and unquestionable abdomen in that one Twilight film you saw, curious what kind of movie his management chose for his first vehicle. Well, feast upon the Netflix plot summary:

When teenager Nathan comes across his own childhood picture while scrolling through a missing persons website, he begins to question everything he ever took for granted — including the people he always assumed were his parents.

Potentially, this tricks you into imagining a psychological suspense drama about a small family’s intense secrets and dark motives. Might this teen heart-throb be tasked with a thorough exercise of his acting chops? Might his competence be startling, or his abject failure completely hilarious? 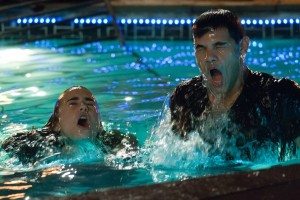 Absolutely do not click on this movie. First of all, competent film-making professionals observed that Taylor Laughtner cannot (yet? he is a teen-ager) perform any acting feats, so none are given him to attempt. Second, it’s a dumb chase movie instead of a psychological thriller, so you are not even granted the amusing spectacle of his wrongheaded casting.

The Netflix summary is over in the first few scenes, and then KABLOOIE! Taylor Laughtner is on the run! His non-parents are assassinated and his suburban home is blown to flaming wreckage, prompting him to grab his homework partner / girl next door and hit the road. They are pursued by a crack team of CIA operatives and another crack team of evil eastern bloc master assassins. The leaders of both teams are intimately acquainted with his mysterious (master assassin) birth parents, but won’t explain anything to him, only to each other, which they do constantly. None of it makes any sense, of course; the plot is a cork board on which to pin a procession of dull evasion sequences.

The vague promise of Abduction becoming a teen Bourne movie is abandoned early: Taylor Laughtner’s character was not experimentally conditioned by his secret agent foster parents to have action movie hero powers. He has them because he is a popular jock at his high school who wrestles and kickboxes. And the young love-birds are not themselves important to their ordeal, they are simply protecting a macguffin which was texted to a cell phone by Taylor Laughtner’s birth-father (played by a portion of Dermot Mulroney’s chin). 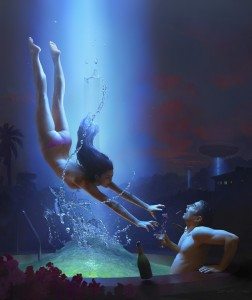 This image has nothing to do with this film, but c’mon. Once you see this, you just sort of have to post it.

Perhaps you indeed harbor specific interest in Taylor Laughtner, because you have a crush on him or otherwise deem him wonderful to look at. In that case, you heard about Abduction when it came out, and you watched it, and Stand By For Mind Control hopes that you knew what you were in for when you sat down. You do get to look at him plenty. He has the makings of an action lead in the medium and wide shots (though he also has the bad habit of flexing and smirking whenever he accomplishes a stunt, perhaps learned from his adolescent consumption of Jean Claude Van Damme DVDs).

It’s during the close-ups that you realize this poor boy cannot emote and that nothing will rescue your streaming experience. He can’t even shut up and smolder properly. Watch his romantic foil get bored making out with him and wander off for snacks:’

The viewing of Abduction is a demeaning and bothersome chore, guaranteed to ruin most of an evening for you. Under no circumstances ought you or your loved ones click on this film.