The first two episodes of Breaking Bad’s second season are one hell of a wild ride. Nothing in season 1 is this intense. The show takes off running and doesn’t stop. In fact the second episode ends with Walt and Jesse running from Tuco’s corpse and Hank, who shot him dead. 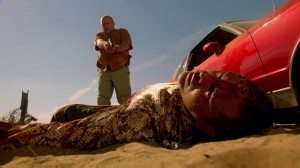 I think you got him, Hank

Episode 1 opens with the flash-forward that will wend its way through the whole season. Black and white shots of a hose, a snail, a siren, the pool, and floating in it—an eyeball? What is that, human? It’s sucked into the filtration system, and then, in bright, pink color, a teddy bear floats by, slowly rotating until we see an eye missing, and half of the bear burned to a crisp.

Which okay, I’m writing this and you’re reading this already having watched season 2. We know what we’re looking at: the results of a mid-air plane collision, ultimately caused by Walt’s actions. One of those planes is a 737. The name of this episode. 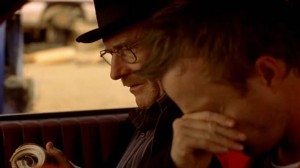 Next we cut to the junkyard and the last scene of season 1 plays over again. This time we follow Hank and Jesse to their car. Walt calculates how much money he’s going to need in total to care for his family. “737,” he says, “Seven hundred and thirty seven thousand, that is what I need.” You’re going to get it, Walt. 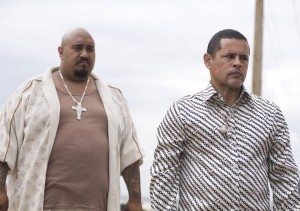 Tuco and Gonzo, the nice henchman

Pulling out of the junkyard, they almost run into Tuco, who’s returned with a problem: No Doze, the guy he beat unconscious, has died.

I forgot how little of Tuco this show actually contains. No sooner has Walt made a deal with the guy than he’s taken out by Hank. Credit to Raymond Cruz, who plays Tuco so memorably. We also meet an even more memorable character, Tuco’s uncle, Hector, AKA Tio, who speaks not a word, but is equipped with a very expressive bell on his wheelchair. Vince Gilligan had no idea how big a role Tio would eventually play in the show. As usual, he and his team of writers show their wisdom by using characters they’ve already created to further the story, giving the whole show its feeling of claustrophobia and inevitability. Everyone is tied to everyone else in Breaking Bad. Everyone’s actions affect someone.

Gilligan has said that for season 2, he and the writers worked out the entire season in advance, every little bit of it. Which drove them a bit nuts. In subsequent seasons they worked out the big picture and the basics of how to get there, but allowed room to make discoveries along the way. This is surely a better way to go about it, but I’m guessing the later seasons work so well because of the effort put into season 2. 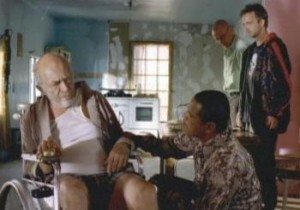 Tuco and his evil uncle, Hector

So Walt and Jesse, having witnessed Tuco murder a man, are a touch worried. Will Tuco kill them to keep them quiet? Seems reasonable. Jesse buys a gun. Walt has a better idea: poison Tuco with ricin, which Walt makes from beans. Ricin. Another huge character in the show. As of halfway through season 5, no one’s actually been poisoned with it. But it turns up in every season. Someone’s going to die from it.

Meanwhile, one major thread running through season 2 is Walt’s deteriorating relationship with Skyler. After the drug deal/murder with Tuco, he comes home and more or less rapes Sklyer in the kitchen before she shoves him off. Unlike the sex at the end of the pilot, enhanced by Walt’s brief foray into danger and excitement, this time it’s dark and twisted. Walt goes out to the pool and sits in his thinking chair. He’s a mess. 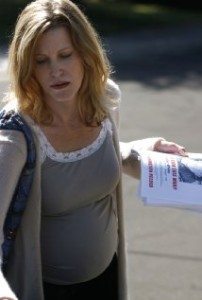 We get some more scenes relating to Marie’s thieving ways, which are admittedly not the strong point of the show. Hank and Skyler have a scene about the stolen tiara that’s a bit overdone. Yes, Marie thrilling to theft is thematically meaningful to the show. But unlike so much else about Breaking Bad, her actions never relate in a direct way to what’s going on with Walt (unless I’ve forgetten something down the road). This wouldn’t seem unusual in any other show. In fact it would seem smart to explore a less major character whose actions, even if on a far smaller scale, mirror those of the protagonist. Only in Breaking Bad, a show where everything is so neatly tied together, does it feel extraneous.

Through Hank, Walt and Jesse learn that Gonzo, Tuco’s other henchman present at the junkyard, has been found dead. Meaning Tuco’s definitely out to get them. And get them he does.

Episode 1 ends with Walt coming home late at night. Skyler, having no idea where he’s been or what he’s been doing, is in the bathtub. Walt comes in and he’s got a faraway look on his face. He says he needs to tell her something, and then his phone rings. He checks the number, doesn’t answer. Then walks out of the bathroom, saying nothing.

Outside is Jesse in his car. Before Walt can yell at him, Tuco reveals himself in the backseat with a gun. Tells Walt to get in. And away they drive. 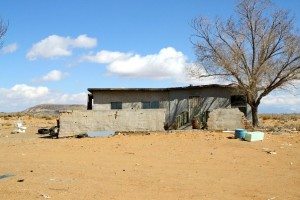 Episode 2 begins with a flash-forward of Jesse’s car bouncing up and down in the desert, shell casings all around.

Tuco brings them out to the desert. To kill them? No, he brings them into a little shack where they meet Tio.

The ricin is in a little baggie full of meth. Jesse tells Tuco it’s a new recipe, which that alone would get him to try it, but Jesse can’t stop talking. He says there’s a special ingredient in it, chili powder. Tuco hates chili powder, tosses it aside. Nice going, Jesse.

Tuco is freaking out because he hasn’t heard from Gonzo. He thinks Gonzo ratted him out to the feds. This is strange news to Walt and Jesse, who know Gonzo is dead and assumed Tuco killed him. (In a sickly funny scene, it turns out that Gonzo, being a nice guy, went back to the junkyard to retrieve No Doze’s body for a proper burial, when a stack of junked cars collapsed and crushed his arms. Oops.)

Tuco’s got big plans. He’s going to bring Walt down to Mexico and set him up in a “super lab.” Tuco’s cousins are coming to drive them (which cousins will play a major role in season 3). Jesse, however, is expendable. For the first time here, Walt stands up for Jesse, insisting that he needs Jesse to make the meth. 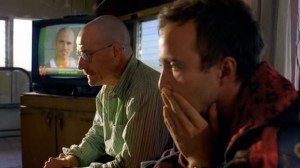 Walt and Jesse, waiting for Tuco to kill them

The whole sequence of Walt and Jesse held hostage by Tuco is unbearably stressful. At one point the TV cuts to news of Gonzo and No Doze being dead. Walt changes the channel, but Tio is watching. Is Tio at all coherent? It seems not. Yet when Walt sprinkles the ricin-coated meth into Tuco’s burrito, Tio sees him, and starts ringing his bell. Tuco can’t figure out what’s up. Finally he gives his burrito to Tio…who knocks it to the floor.

Tio keeps on ringing his bell. He doesn’t like Walt and Jesse. He doesn’t trust them. Tuco believes in the old man. He freaks out. Hauls Jesse and Walt outside to shoot them. Jesse’s as good as dead when Walt distracts Tuco by admitting the truth: they tried to poison him. And Jesse grabs a rock and knocks Tuco in the head. Then shoots him in the stomach. They leave Tuco to die when a car comes racing up. 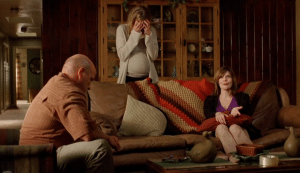 Walt’s disappearance has been hell on Skyler and Walter Jr. They put up fliers and get Hank to investigate. Skyler mentions the phone call, but Hank checks the records: no call is listed. Meaning Walt has a second cell phone.

Knowing that Hank bought pot from Jesse, Hank tries to find him. He traces Jesse’s car, and that’s how he winds up in the desert, facing who at first he thinks is Jesse. Turns out it’s Tuco, already gutshot, eyeing the assualt rifle on the front seat of the car. They both go for their guns. There’s a nasty shootout. When Tuco pauses to reload, Hank sets up a shot and kills him. 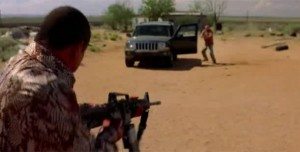 Jesse and Walt witness the whole thing, not seeing it’s Hank until Hank walks up to the body. When Walt realizes who it is, he takes off running into the desert.

These two episodes are a fantastic opening to the season. Things are going to mellow out after this, at least relatively speaking. But the themes are all here. Walt needs money, and he will do anything to get it, even when he sees it tearing apart his family. Walt imagines what he’s doing is all about saving his family, and that his actions have nothing to do with anyone else. Yet Hank is almost gunned down because of Walt. And in the end of the season, two planes blow up. Walt is proving a very dangerous man to have anything at all to do with. We’ve yet to see just how manipulative he can be, but the groundwork has been laid.