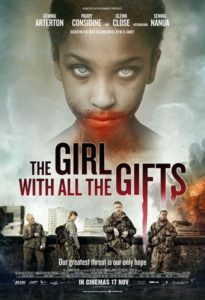 Can you tell I’m suffering from zombie fatigue?

The Girl with All the Gifts was written by M.R. Carey, who also wrote the book it’s based on. Why the name? Good question…I’m trying to remember if there was a massively popular series of books that sold the world over, every title of which began with “The Girl…”

Nope. Can’t think of anything. Great name. Very applicable to the story, which, at least in the movie version, focuses on a 10 year old (or so) girl, Melanie (Sennia Nanua), who I guess has the gift of being the star of the movie? Also, her brain is chock full of monster-fungus. She’s one of a whole bunch of brain-enfungused children, the so-called second generation zomb—er, hungries. Unlike the more traditional first generation of the infected, who are in every way the zombies we know and love (of the fast running variety), the second generation children, when they’re not feasting on human and/or animal flesh, are just like regular kids. 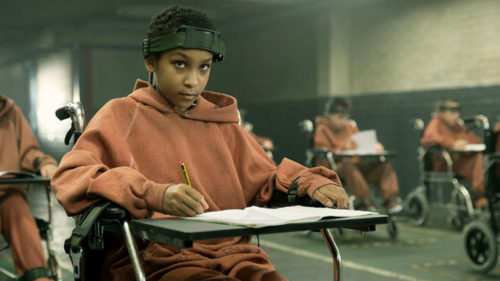 How ever did they get this way? I’m glad you asked. When pregnant mothers, or at any rate those reasonably far along in the their pregnancies (I presume), became infected by the mystery fungus, their unborn childen also became infected—and then ate their way out of their own mothers’ wombs! Yikes!

Only wait, if their mothers were infected, why would the kids eat them? The hungries, like all zombies, don’t eat their own kind. Maybe just as a means of escape? But then why not simply crawl out of the most available opening? I remain skeptical on this point.

So anyway, in this second generation, the fungus acts more as a sympathetic parasite, allowing the children to, mostly, be children, aside from their occasional consumption of human flesh.

Another question we might ask is why, as the movie opens, there’s a military installation in which a whole bunch of these kids are kept, each in a private cell, fed on maggots, and every day brought to a classroom to learn about the periodic table and improbably plot-appropriate Greek myths. Do they really need to be educated before they’re vivisected by evil Dr. Caldwell (Glenn Glose, who, admit it, you always wanted to see both fighting and being eaten by zomb—er, hungries) in the hope of developing a vaccine?

I’d think no. With regards the education of zombie children. 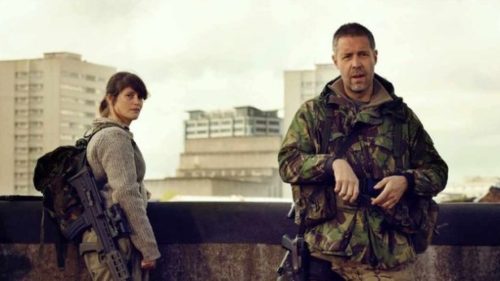 Melanie is the star pupil. So, even though she’s that one obnoxious student always raising her hand and getting every fucking answer right, their soft-hearted teacher, Helen (Gemma Arterton), kind of falls in love with her, and when the zomb—er, the hungry hordes overrun the military installation, Helen snatches up Melanie and brings her along in the lone escaping military truck. In which truck they find Dr. Caldwell and a few soldiers led by Sgt. Parks (Paddy Considine). You can tell Parks is a jerk because he treats Melanie like she’s an inhuman monster, instead of a sweet little kid with a fungus wrapped around her brain telling her to feast on human flesh, which she does with abandon unless she’s handcuffed.

Only get this. At the end of the movie, we find out Sgt. Parks’s wife was seven months pregnant at the outset of the fungus incident. His unborn baby must have eaten its way out of its mother and become a second generation fungus-baby. Thus his prejudice against flesh-eating fungus-children is justified. Why else would he hate Melanie?

One nice bit of business is how, when enough zomb—er, hungries congregate, and when there aren’t any humans to feast on or otherwise distract them, they fall into dormancy, pile themselves up, and enter the next stage of their development, in which the fungus bursts out of their bodies and grows into long, tall stalks dotted with baseball-sized seed pods. Should those pods burst, the fungus will go airborne, and humanity will be truly fucked.

I like this. It’s clearly inspired by the cordyceps fungi, which attack ants and other insects, take over their brains, impel them to climb as high as they can on whatever’s handy, then grow out of their hosts and explode into tiny airborne bits that infect other insects. 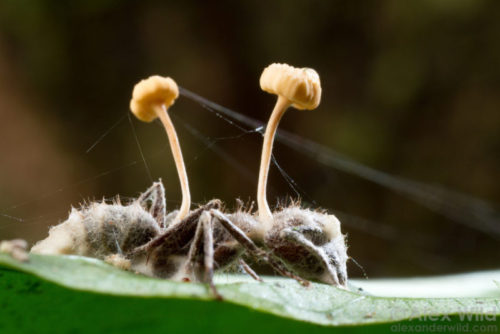 Cordyceps and its host

I’d have much preferred a movie where this angle of infection was explored. It’s too bad the bulk of The Girl with All the Gifts plays out as a mostly typical zombie film, saving the seed pods until the end.

One other atypical sequence goes full-on Lord of the Flies. Late in the movie we meet a group of fungus-kids living on their own in the ruins of a city. They’ve got painted faces, wild hair, and speak in grunts and howls. I was suprised not to see them fighting over a conch shell. When Melanie kicks their leader’s ass, I fully expected Sgt. Parks to lean over and whisper to Helen, “Sucks to your ass-mar, amirite?”

Still and all, despite my cavilling, and despite my general exhaustion with zombie flicks, The Girl with All the Gifts is a fairly slick piece of movie-making. The actors do good work, especially Sennia Nanua as brilliant fungus-kid Melanie, the dialogue is fine, the story moves along well enough. It’s a bit dodgy with its zombie rules, but not too egregiously. The ending flops a bit, which again, if they’d dared to push harder on the parasite angle and what it means for the future of new fungus-humans, it could have had more of an impact. 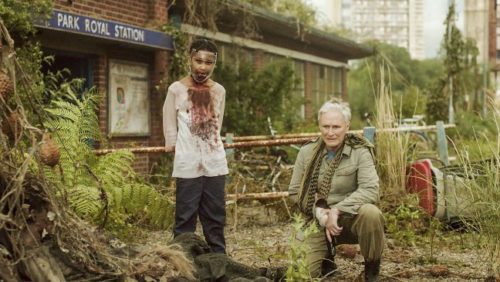 Although now that I write that, I see it amounts to the very same ending as the original vampirism-caused-by-a-virus story, I Am Legend, by Richard Matheson, the movie of which, The Last Man on Earth, from ’64, was a major inspiration on George Romero’s Night of the Living Dead four years later, in which the modern zombie was invented.

I Am Legend follows what may be the last man on Earth as he battles what we now would call rather zombie-like vampire creatures, and ends on what for him is a very depressing note—he can’t beat them, they win—but what for the vampires is a happy day: They are the new humans, the next step in evolution, hurrah!

So in a way, The Girl with All the Gifts brings this whole zombie business back to where it started. It’s no wonder zombie fatigue is such a serious malady.

One response on “The Girl With All The Gifts, But Mainly The Gift of Yet Another Zombie Movie”