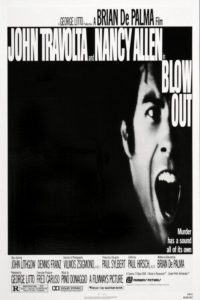 I watched Blow Out (’81) for the first time since the one other time I watched it ages ago, and I wasn’t going to write anything about it, because why bother? It’s just another terrible Brian De Palma flick. Then I began reading articles online about it to find it’s widely seen among the cineratti as a brilliant statement on the nature of film disguised as a scathing, paranoid ‘70s thriller, and without a doubt De Palma’s best film, a work of unqualified genius. I tried to understand what these writers see in the film, but couldn’t. None of the articles get around to explaining why the movie is the work of genius they say it is. They state the genius of the film as unquestioned fact.

And so I thought I would question it.

De Palma’s style has never been, to put it mildly, my cup of tea. I grant that he certainly has a style, which puts him in a realm of filmmakers that, like it or not, you have to give some amount of reasoned consideration to. Even though his style borrows with abandon from other filmmakers, you’re never not aware you’re watching a De Palma movie. One is terribly, awfully, outrageously aware one is watching a De Palma movie, every time out.

I find his style to be notable for no other reason than that it’s there, loudly, right up in my face. It doesn’t move me emotionally or artistically. It’s like he glories in making trash, but does it in a way that says “I dare you to call this magnificent art trash!”, thus ruining the fundamental joy of watching actually entertaining trash.

Blow Out is De Palma’s riff on Antonioni’s Blow-Up and Coppola’s The Conversation. Both of his inspirations are subtle, affecting, paranoid statements on what is real and what isn’t, on how the human mind seeks out connections and meaning that aren’t there, or if they are there, are only as there as everything else in the world is there: In the mind of the perceiver. 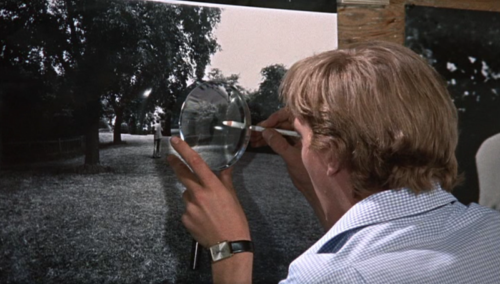 Spotting a killer in Blow-Up

In Blow-Up, a photographer takes photos of a couple in a park. When he blows up the image, he thinks he sees a man with a gun in the background. He thinks he’s caught a murderer. He even finds a body in the park. But when he looks for it later, it’s gone. What did he really see in his photo? Anything? Or did he lose himself in the pixels of his own feverish imagination? The final scene of a mimed tennis game makes explicit the idea that nothing is real but what we believe.

In The Conversation, a sound-recordist picks up a couple talking. He thinks they’re in trouble. He thinks they’re going to be hurt or killed. But in the end, he fears he’s gotten it all wrong. It’s the couple plotting murder on the tape. Or is it? His tape is stolen. Mysterious forces are listening to him. He tears his apartment to pieces searching for the bug. He can’t find it. He’ll never find it. He’ll never know. 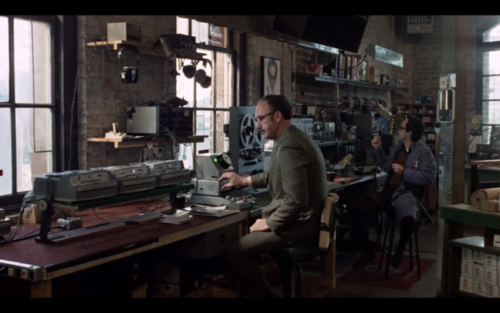 Harry’s sound lab in The Conversation

In Blow Out, De Palma tells the straightforward story of a movie soundman, Jack (John Travolta), who, late one night recording atmospheric sounds on a bridge, records a passing car crashing through a guardrail and plunging into the river. He thinks there’s a gunshot on his tape. He thinks a tire of the car was shot out. He thinks the man in the car who died, presidential candidate McRyan, was the victim of assassination.

He’s right. There is nothing ambiguous in Blow Out. The only thing Jack’s wrong about is his assumption that the conspiracy out to get McRyan wanted him dead. They didn’t. They only wanted to catch McRayn with a whore and torpedo his campaign. But the crazy man they hired for the job, Burke (an extra-creepy John Lithgow), takes matters into his own hands and shoots out the tire of the car, and McRyan winds up dead.

The whore in the car, Sally (Nancy Allen), is rescued by Jack before she drowns.

So Burke figures he has to kill her now, to cover up the plot to smear McRyan.

There is nothing ambiguous here, nothing suggesting schemes larger than we perceive operating in the shadows of our lives, controlling out fates. The Parallax View this ain’t.

In terms of plot, it’s just a standard movie-psycho, Burke, killing some people until he’s killed by Jack at the end.

Burke prepares for another kill

In terms of Blow Out being a meta-commentary on the act of filmmaking itself, I’m equally lost.

On the bridge that very same night is a photographer, Manny (Dennis Franz). Turns out he’s Sally’s boyfriend. They run a business setting up philanderers and taking photos of them. McRyan was just another job. Sally rides in the car with McRyan, Manny takes photos of them. Why he decides to take those photos while the car is moving, in the dark, on a lonely bridge is not answered. De Palma is many things, but logical is not one of them. Which is to his credit or not, depending on your taste.

Now we have Jack’s audio, and Manny’s series of photos taken of the car spinning out of control and going over the bridge. Jack puts the photos together as a film, then lays his audio over it.

The film of the photo of the car

At which point I was thinking, how does this prove anything? He could lay the audio over it any way he wants, so we hear the alleged gunshot at any point in the car’s journey. Manny didn’t take 24 photos per second. How long Jack lets each photo play and how he lays on the audio is entirely up to him. His little creation proves nothing at all.

Such a set-up is ripe for showing the lies movies tell us. Jack lies to himself about what he heard and devises “proof” which isn’t proof at all, but a story he tells himself to back up his belief. Great!

Only that’s not Blow Out. The gunshot is real. Everything is real. Everything Jack supposes to be true is true. I don’t get where the film commentary comes in here. The film he creates is, in the context of the movie, not at all suspect. It’s the real deal. It’s a genius bit of creative sleuthing proving true what we already know happened.

Jack’s only setback is caused by absurd plot contrivances robbing him of his finished film, and resulting in Sally’s death. Jack holds her dead body while a camera spins around, a massive fireworks display filling the screen behind them. It’s a wild cinematic image. Why it’s there for her death, I don’t know. Big emotions equal big explosions? This sums up De Palma to me: An image that, taken alone, out of context, looks really cool, but that taken in context has no context. This shot mirrors one earlier in the movie when Jack finds all his tapes have been erased. The camera spins slowly in the middle of the room, around and around and around—we could not be made more aware that cinema is happening here—and all I can think is, why? Is this a comment on the artificiality of cinematic tricks? Is that what I should be thinking while watching the scene? How very…technical. 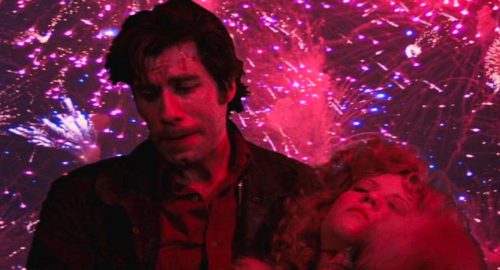 So anyhow, Sally dies while Jack, at a distance, records Burke killing her. He records her death scream. Which scream, at the end of the movie, he hands over to the director of the teen slasher flick he’s working on. Tears in his eyes, he listens to the scream over and over again as they lay it into the movie.

Only wait. Is it irony? No. What is it? A telling commentary on real screams and fake ones? On movie screams being fakery? Unless they’re real screams? In which case they’re real? Or that the movies we watch are fake and so is this one? Because her scream is still fake for us? But it’s real for Jack? Who’s also fake? I find this business so muddled as to be incomprehensible.

Mostly I think De Palma liked the girl being killed.

There’s just no getting around De Palma’s love of killing off young, naked women in his movies. He thrills to it. He gets off on it. It’s not subtle. It is, at the very least, unsettling. At worst, it’s something much worse.

Blow Out opens as though it’s a teen slasher movie. A POV killer stalks scantilly clad co-eds dancing in their dorm rooms, sneaks into the bathroom and makes to stab a naked girl taking a shower. De Palma sure likes terrorizing naked girls in showers. The girl screams—and it’s the most ridiculous scream you’ve ever heard. It’s the “Hulk running” of girls in showers screaming.

Cut to the editing bay, and Jack, and the director, and how he needs to find a better scream. Oh, you will, Jack. You will. Mwa ha ha! So that’s how the movie’s tied together, with the search for a girl screaming as she’s murdered.

Why does Sally have to die at the end? What’s her death got to do with anything? I guess it makes her scream that much worse?

Speaking of Sally’s death, the plot contrivances getting us there are absurd. Jack makes a deal with a newsman who believes Jack’s story of a gun shooting out the tire and the subsequent cover-up. Jack’s going to give him the film to play on the air. But clever Burke phones Sally, claims he’s the newsman, says he wants only her to deliver the evidence, and sets a place for the meet.

Why anyone would believe him is ridiculous. It’s so ridicuous De Palma even has Jack, when Sally tells him about the call, say it’s ridiculous. Why would the newsman call her? Why would he want her to bring the movie? It makes no sense at all. Says Jack, quite reasonably.

Jack therefore makes a single phone call to the newsman to ask him what’s up, they realize the killer has set up a meet and will be waiting there for Sally, call the police, catch Burke, and air the film revealing the plot to smear McRyan.

Oh, wait, no he doesn’t. Instead he says, well, crazy at it sounds, I guess we have to do it. Then he angrily observes how he hasn’t got time to make a copy of his movie. Of all the luck! He gives the lone copy to Sally, wires her for sound, and sends her off to meet the crazed killer. She meets him, he destroys the evidence and kills her.

It’s like the movie is nothing more than a jumble of tropes and references to other movies thrown together without any concern for story or character logic. Which is actually how I’d describe all of De Palma’s movies.

Others would have it otherwise. To them I say: Have at it! De Palma’s all yours.

Do you hear what I hear?