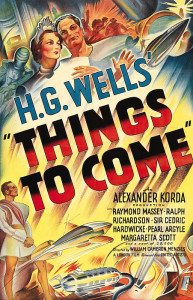 So much time, so few movies. Wait. Reverse that. Watching H.G. Wells’ Things To Come for the first time, I wondered how I’d gone so long without seeing it. It’s a weirdly unique science fiction film from ’36 directed by the first famous art director and production designer (which job title he invented), William Cameron Menzies, and written by H.G. Wells. It functions not at all like a normal movie. It takes place over a 100 year time span, with characters who only show up briefly before disappearing into the past, though a handful of actors show up again playing different parts.

Wells made a career of predicting the future. Remember The Time Machine? He was right about the Morlocks, and much else besides. Like atomic bombs. And the outbreak of WWII, which in Things To Come arrives on Christmas day, 1940. And the aerial bombings which would result.

The WWII of the movie lasts until about 1970. Which as I recall is slightly longer than the real one. No mention is made of who begins hostilities, aside from comments of the “you know who it is” variety, so I presume we’re all supposed to be thinking: Nazis. The movie is set in Everytown, bombed from the air into smithereens to set things in motion. 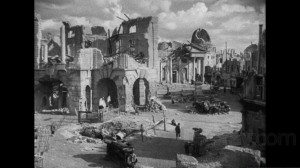 Decades pass and the world is plunged into more or less medieval times. Ralph Richardson turns up as the Boss, a bumbling warlord who’s risen to power by shooting everyone with the “wandering sickness,” a mysterious ailment that essentially turns people into zombies. So chalk up another prediction for Wells: disease causing zombie-ism, save the flesh-eating part. 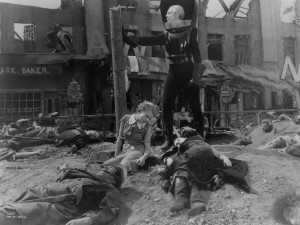 Techno-man brings on the sleeping gas

Into this primitive hellscape who should arrive but a well-spoken fellow in a wacky little airplane wearing a giant spacehelmet and a shiny leather outfit who says he’s a part of Wings Over The World, a new, technology-based society out of Basra, Iraq, ancient cradle of civilization. The Boss doesn’t like the cut of his jib and tosses him into jail.

Bad move. The Wings Over The World folks have giant, futuristic airplanes from which they’re fond of dropping some kind of “sleeping gas” on the populace. Gas is a big worry in the movie. After its use in WWI, Wells, and many others besides, assumed the Germans would use it if and when they started a new war (in the real WWII, they didn’t). The early war scenes include a shot-down pilot who rather than succumb to the clouds of poison gas blowing over him—gas that he himself dropped—shoots himself. 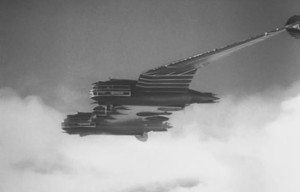 Wings Over The World–they’re not messing around

The rest of the movie takes place in 2036, in a Jestsons-esque Everytown built entirely underground, and founded on technology and science. Their world includes a kind of live TV, and what look like iPad prototypes to watch it on.

It’s a crazy movie for its time. I’m not sure what to compare it to, outside of Fritz Lang movies like Metropolis and Woman In The Moon, and early Russian science fiction classic Aelita, Queen of Mars. The special effects aren’t quite as memorable as those movies, but Menzies and his crew create an original, fairly out-there look. 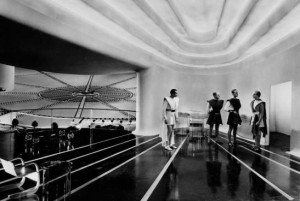 Everytown of the future

Things To Come is unusual for its era, or any era, really, in not following specific characters, but rather tracing the horrors of an insanely protracted war, and the society that rises up from its ashes. Science and progress are presented as the saviors of the backwards world into which war has plunged humanity, though at the end an anti-progress mob is unleashed on the “space gun,” about to shoot a ship to the moon. Too much progress, too fast, is their complaint. It’s hard to say what Wells thought of all this. He’s clearly pro-science, pro-progress, pro-space exploration, but at the same time he always had a dim view of humanity, and the view that we’re in any way better than any other forms of life. Remember, it’s the microbes that save our asses in The War Of The Worlds, and at the end of The Island of Dr. Moreau, the hero finds he can no longer look at people without seeing the animals within.

I can’t say I loved the movie. It’s so structurally odd that it’s tough to really get into emotionally. But intellectually it’s fascinating. And if you’re a science fiction film nerd, like me, it’s unmissable.