After the dynamite (mid)season opener last week, this week’s Breaking Bad, “Buried,” tosses everyone deeper into the hole Walt’s been digging since this show began. The focus is confusion. Jesse’s not the only one spinning around in circles. Nobody knows what anyone else knows, and they’re acting accordingly.

We pick up seconds after the Hank/Walt showdown that ended last week, with Walt exiting the garage and calling Skyler only to realize that Hank got to her first. Walt, behaving as he always does in such situations, panics. Not for a second does he think Skyler isn’t telling Hank everything.

What she tells him is exactly nothing, in what has to be Anna Gunn’s best scene in the whole run of this show. The tangle of emotions she goes through listening to Hank is agonizing, and we have no idea how she’s going to play it. Is Hank having found out about Walt a relief? Will she tell him everything? Anything? Will she downplay her involvement? Or admit to it? 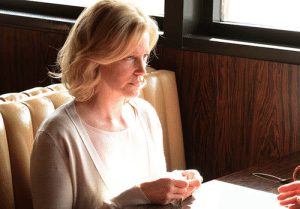 Skyler comes apart and keeps it together at the same time

Hank overplays his hand. He’s as blind to Skyler as he was to Walt. He’s on track at first, saying he knows Walt pressured her into silence, which in effect he did, which is where you think, sure, maybe everything Skyler has kept locked up inside of herself comes out now, and that’s when Hank breaks out the recording device, and tells Skyler to be sure to state her name and the date before recounting every detail of everything that happened, starting at the beginning.

Anyone would balk at that. Hank’s too intent on catching the monster he’s been after since day one to realize it. He wants Walt, no matter the cost. It’s as clear to us as it is to Skyler. Not that Hank doesn’t care what happens to her. It’s that he imagines by doing everything himself, he’ll best be able to protect her. Maybe he’d be right, if not for the fact that Skyler’s neck-deep in Walt’s criminality. That’s what Hank can’t see here. He can’t imagine Skyler is anything but an innocent caught in Walt’s web, scared into silence.

Skyler realizes she needs to get away. “Am I under arrest?” she repeats over and over, louder and louder, rushing out of the café. Hank has no idea what happened.

Hank drives Marie to Skyler’s house in the hope she’ll have better luck. Inside, Marie wants Skyler to tell her Hank is crazy. Skyler says nothing. Marie asks how early Skyler knew about Walt. The date is pushed further and further back. Back as far as Hank getting shot? Skyler is in tears. And Marie slaps her. It’s a continuation of the Hank/Walt scene, of one half of the family learning the truth about the other. Hank punches Walt. Marie slaps Skyler.

Following which Marie storms out, and grabs baby Holly on the way, as if that made perfect sense. Hank has to come to Skyler’s rescue, shouting at Marie to give the baby back. In their car outside, Marie tells Hank he has to get Walt. Marie wants to save her sister from the monster.

Problem is, as Hank sees it, the moment he turns up again at work with merely a suspicion that Walt is the meth king, he’ll be out of a job, having missed the fact that his brother-in-law was the man he’s been searching for all this time. It’s up to Marie to point out that if Walt gets away despite Hank knowing who he is, Hank could wind up in jail himself.

Hank returns to work. One assumes Hank is taking Marie’s advice, but we’ll have to wait until next week to see what he tells Gomez and the rest of the DEA.

Walt, in panic mode, buries his massive pile of money in a hole in the desert. First he has to dig it, all by his lonesome. There’s nobody else left to help him. He digs all night, buries it, memorizes the GPS coordinates, then prints out the numbers on a lotto ticket he sticks on his fridge. It’s a sad, lonely scene out there in the desert. Everything Walt’s done has been reduced to this: six barrels of cash buried in a hole in the middle of nowhere. I wonder who’s going to end up with the lotto ticket at the end?

The scene between Skyler and Walt is actually kind of touching. It’s like they’re in love again, for the first time since who knows when. She tells him she told Hank nothing. He doesn’t answer before passing out on the bathroom floor. When he wakes up, he’s wrapped up in a blanket with a pillow under his head, like the big baby that he is. All he wants is for Skyler to keep the money. He’ll turn himself in if she keeps the money and gives it to their kids. He doesn’t want everything he’s done to be for nothing. She has another idea. Hank has no evidence. Maybe they should keep quiet and see what happens.

Skyler is in deep. This doesn’t bode well for her, I’m afraid, in terms of living through the end of this show. I mean clearly it looks bad for everyone, but I’m thinking this decision of Skyler’s is her death knell. She’s been angry at or scared of Walt for a long time, but now…now she’s with him to the bitter end. And what a bitter end it’s going to be.

There’s a certain amount of putting pieces into place in this episode. So we also get a scene of Lydia meeting Declan in the desert to bitch about his shoddy meth cooking. He leads her to the bus-turned-lab buried underground. It’s filthy. Declan says it’s just the bad light. Lydia wants Todd to cook. Declan doesn’t. At which point Todd and his uncle machine gun Declan and his guys while Lydia cowers down in the bus. Always nice to merely hear a massacre instead of watching it go down. Lydia, tender soul that she is, has Todd lead her through the carnage with her eyes closed. So Lydia is taking over the business with a passion. What happens when blue meth appears on the street again?

As ever, Jesse is spun in circles

The episode opens with Jesse parked in a playground after having thrown away numerous fat stacks of cash. He spins in circles on a merry-go-round, in what is certainly the most concise metaphor for his character the show has ever come up with. Has Jesse ever not been spun in circles? By Walt? Gus? Jane? On a literal merry-go-round at last, he is truly as lost as lost can be.

He turns up again in the final scene, interviewed by the same two cops who grilled him about ricin when Brock was sick. Where’d he get all of that money? Why was he throwing it away? Jesse says nothing. He says not a word the entire episode (a first?). Hank appears outside. He wants a moment with the suspect. The cops agree. Hank enters the room.

I thought we had another scene coming to end on, but alas, we’ll have to wait until next week. How’s Hank going to play this one? How much does he suspect Jesse of at this point? How much will he reveal? He might be wise to lay it all out, to say he knows Walt is Heisenberg. Jesse might be ready to spill his guts in order to save his soul. At this point, Jesse could do damn near anything.

As for Walt and Skyler, I’m not sure merely keeping a low profile is going to play at this point. Walt tends to be a little more pro-active in matters such as these. Especially once he finds out Jesse talked to Hank.

Walt’s mask has finally slipped off. He’s been found out. What we see in this episode are the first repercussions of that slippage slowly radiating out. First Hank, then Walt, then Skyler, then Marie. The family first. Next comes Jesse. Then the DEA? Soon enough, everyone will know.