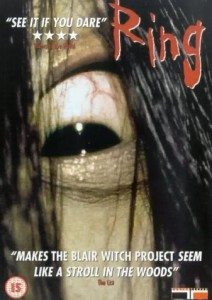 Have you seen The Ring (Ringu)? If so, then you shall surely die in a week, unless you force someone else to suffer through this bizarre series of disquieting images and sounds.

Having never before seen this film (or its American remake, The Ring), I thought I better expose myself to the risk of horrific death. This I did last night, at 6:08pm on September 16th. After watching and puzzling through the eerie production, the phone rang.

I was told I had a week to live, so if anyone knows how to cook astoundingly pure methamphetamine, please give me a call and an RV.

I don’t, in truth, have much to say about Ringu. It’s been voted the scariest Japanese horror film of all time, but I spent most of its length fairly bored. That’s what I’d rather talk about. 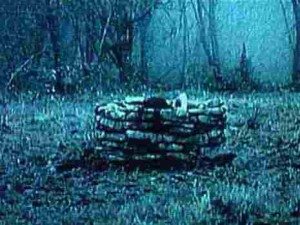 pardon me, but did you see my copy of the Wind Up Bird Chronicles while you were down there?

In case you’ve also avoided the pleasure of knowing exactly when you’ll die of psychic assault, I will divulge some particulars about this technophobic tale. In it, a group of Japanese teens stumble upon a weird videotape — presumably the same weird videotape that is the subject of urban myth in the film. They watch it and then the phone rings. A woman tells them they will die within a week.

For reasons too gruesome to explain or understand, they not only believe this woman, but they also believe the student who presumably answered the phone and passed the message on.

Scary, right? How can kids be so easily convinced by modern media and telemarketers? 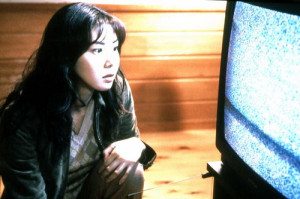 the horror of pre-cable television

Even scarier, an adult reporter who coincidentally is filming a television segment about the rumor of this videotape (which has or hasn’t already proven fatal? I’m not clear) is related to one of these teens. Whom all die of fright on the same day a week later. The reporter tracks down the tape, watches it, and then — with her psychic ex-husband — desperately tries to find a way to avoid the deadly curse, which they now believe. Even though when the phone rang there was just some noise on the other end.

On the plus side, Ringu does have some genuinely creepy moments. The cursed videotape is disquieting in a lo-fi, creative way. Also positive, there is no gore or gonnagetcha boogeywomen leaping out to startle you. Just vaguely insane people doing things that make no sense whatsoever. 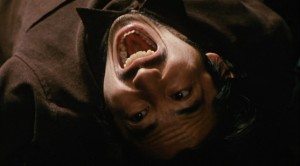 To spoil the film (sorry, it can be spoiled), it turns out there’s a psychic ghost who has somehow created a videotape from her tomb and imbued this tape with the power to kill whomever watches it, unless they copy the tape and pass it along. While that’s an interesting premise with regard to the ubiquitous spread of social media spam, I’m hard pressed to find any motivation for anyone in the film.

Why would a psychic ghost make a videotape? Why would they want anyone who watched it to die? What’s the point of a week’s reprieve? Why would properly interring the offended spirit dissolve the curse — or why wouldn’t it — or why would you suspect it would? Why would the creepy little boy who also talks to ghosts be told to watch the video by his dead cousin?

I didn’t care for Ringu. I don’t care for most horror films, though, even those that most people rave about. I don’t enjoy being made more tense than I am naturally. I don’t find idiocy any more frightening in films than I find it in real life.

I do care about what people connect to in horror films, though. That’s of interest. There is the implacable hunger of zombies. There is the demonic spirit that lurks within our hearts. There are even — occasionally — recursive video images that corrupt us into insanity.

So what makes The Shining and The Thing terrifying and engaging (to me) but Ringu less scary than my nieces’ devotion to Disney princess paraphernalia? 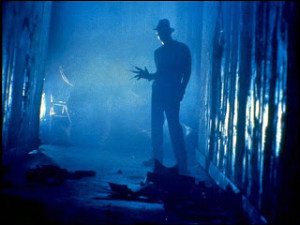 Sometimes I consider this question and wonder if it’s a result of age and experience. Films like Ringu and Nightmare on Elm Street speak to the fears of those facing adulthood. I’ve passed through adulthood into something postmodern and excessively flatulent. The only thing scary to me about bad videotapes is their poor resolution and having to come up with something intelligent to say about them when they’re ready to be rewound.

In Ringu, there is a kernel of fright. Once you’ve been exposed to something, you will either die or be the death of someone else. To me, that sounds like acknowledging your physical maturity. You, having grown to cognizance and full functionality, will either perish or reproduce — ergo surviving in a sense, but dooming someone else to face the same cursed choice.

Our lead character in Ringu does indeed reflect this. In the end, she is forced to save her son by asking her father to accept a copy of the tape from him. The generations carry on the curse of life. It is only this generation, however, that must suffer the special curse of forwarded internet cat videos.

Certainly death is the preferable option.

6 responses on “Ringu Round the Rosie”