“What’s past is prologue,” wrote that clever chap Shakespeare. “Study the past, if you would divine the future,” wrote that thoughtful fellow Confucius. It’s like these two got together to come up with this week’s Mind Control Double Feature, in which we see that no matter how fast you run, no matter how well you hide, the past is right behind you.

That drifter you ran over and buried by the side of the road? His ghost is coming to eat you. That bank you robbed? The bills are marked, it’s the mob’s money, they’re waiting in your bedroom to make you an offer you can’t refuse. That mystery sausage you ate off a food cart drunk at 2 a.m.? Death by salmonella. That funny looking kid you mercilessly teased throughout second grade? You gave him an inferiority complex so intense that, once grown and elected President, he vindictively launched a nuclear attack against…everyone. Nice going.

Let’s put it this way: there’s no escaping your past because you are your past. Everything you’ve done, everything you’ve said, everywhere you’ve been—that’s all you are. The one thing you can never escape—is you. 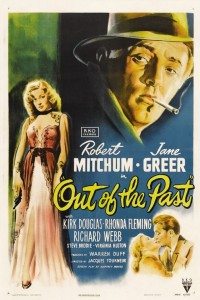 A stranger drives along a highway, arrives in a small town, and stops at a service station. He sees a sign with the name Jeff Bailey on it. He thinks he knows Bailey. He seeks him out.

Jeff is Robert Mitchum. He’s busy having a romantic interlude by a dreamy lake with his new sweetheart, Ann (Virginia Miller). The stranger, Joe (Paul Valentine), has found his man. Jeff used to work for Paul’s boss, Whit Sterling (Kirk Douglas), as a private investigator. Whit wants to have a chat with Jeff. Seems they’ve got a complicated past. Jeff can’t say no to Whit’s “invitation.” He’s got no choice. They’ve found him.

He takes Ann with him on a drive to Lake Tahoe, where Whit awaits, and along the way he relates the long and twisted tale that brought him here. Most of the movie is thus a flashback. Until they reach Whit’s house, where more surprises await. 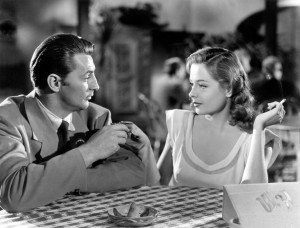 You picked the wrong woman to fall for

This is a film noir, one of the best ever made, so, needless to say, there’s another woman involved, Kathie (Jane Greer), the femme fatale, whose fate was and will be tightly intertwined with Jeff’s and Whit’s.

The plot is complicated and full of duplicity. It’s wound as tight as a noose. Jeff did all he could to escape his earlier mistakes. He wants nothing more than a new life, a simple life, in a small town with a sweet girl like Ann, but what he did remains a part of who he is. The woman he loved, and the man he hurt, haven’t forgotten him. They never stopped looking for him. Their business is unfinished. 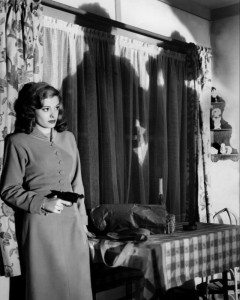 The story builds to a fantastic climax. Who lives and who dies is left hanging until the end. Out of The Past set a high bar for the noir genre then finding its feet. It inspired many excellent, dark, seedy movies, but few are as excellent as this one. Mitchum is one of those perfect noir actors, like Sterling Hayden, born to play men destroyed by fate, with faces chiseled out of stone.

Jacques Tourneur, the director, is a master of atmosphere. Prior to Out of The Past he worked with producer Val Lewton directing early horror classics like Cat People and I Walked With A Zombie. Out of The Past was shot by Nicholas Musuraca, an unsung early genius of cinematography. He brought the shadowy look of German Expressionism to all of his films, and helped usher in the classic noir look established in the ‘40s.

It was written by Daniel Manwaring, adapted from his own novel, Build My Gallows High. Manwaring would go on to write one of my other favorite movies, Invasion of The Body Snatchers (’56). 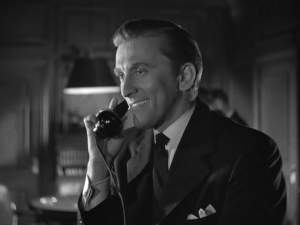 Kirk Douglas, so charming back in the day 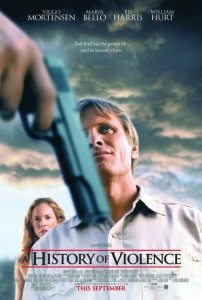 Two men commit a violent crime before driving to a small Indiana town and stopping at a diner owned by Tom Stall (Viggo Mortensen). They try to rob the place. But Tom kills them in a manner oddly professional for a guy who serves coffee and pie for a living. He earns a bit of fame as the small town fella who stopped a robbery. And wouldn’t you know it, somebody sees him on the TV, and that somebody thinks Tom is somebody else.

A History of Violence marked the beginning of a new phase for director David Cronenberg, one far less reliant on the weird and grotesque he was once known for in early movies like Videodrome and Scanners, and later ones like Naked Lunch, Dead Ringers, and eXistenZ. Prior to A History of Violence he made the strange and little seen Spider, a mostly bloodless psychological study of a very disturbed soul. And then he went mainstream. 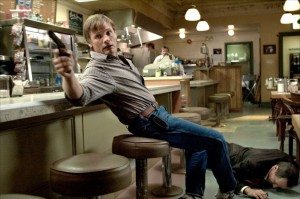 Well. “Mainstream” for Cronenberg, anyway. A History of Violence is a dark and, in subtle ways, strange movie. Its conceit, like Out of The Past, is that a man can try to escape himself, can even succeed for awhile—and Tom Stall succeeds far longer than Jeff Bailey, marrying and starting a family, with a son in high school and a younger daughter—but in the end, he’ll be found out.

Carl Fogarty (a scarred and creepy Ed Harris) shows up in a black sedan with a couple of henchman, says Tom’s a Philadelphia gangster named Joey Cusack. Tom denies it. But Fogarty won’t budge. He wants Tom to return to Philly. There’s an old score to settle with his brother, Richie (William Hurt). 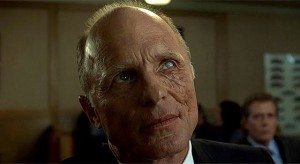 If this was one of my buddies, I’d start a new life too

But the focus of the movie isn’t so much on the past. We don’t need to know the details of who Tom used to be, only that he used to be someone else. The movie is concerned with the present. Will Tom keep his new family together, or be subsumed by his old one?

There are two remarkable sex scenes in A History of Violence. The screenwriter, Josh Olson, who loosely adapted the story from a comic book, added the sex scenes once Cronenberg signed on to direct (because if you get the chance to write for Cronenberg, you’re going to put some twisted shit in there). The first comes early. Tom and his wife, Edie (Maria Bello), have a playful and realistic encounter. They’re comfortable and familiar with one another and it shows. It feels real in a way few movie sex scenes do. 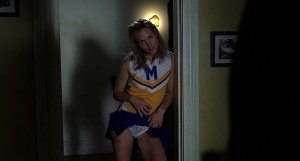 Later on, when Edie comes to understand that the man she married is not who she thinks he is, there’s another sex scene, one that’s equal parts love and hate. It’s disturbing and violent. It lasts a long time. It’s unnerving. When I saw the movie originally, people in the theater laughed at the scene—that’s how uncomfortable it made them. Suddenly it wasn’t the fun, shoot-em-up date movie they’d imagined it was.

For a movie filled with revenge and death, it’s surprising to realize that at its core A History of Violence is about family. What do you do when you find out someone you love–your husband, you father–isn’t the man you thought he was? And what do you do when you are that man? How do you deal with your past once it catches up to you? 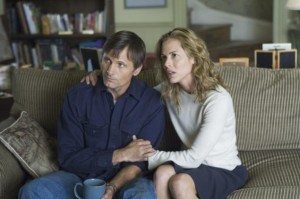 Stand by your man? Or shoot him?

One response on “Mind Control Double Feature #73: There’s No Escaping The Past”