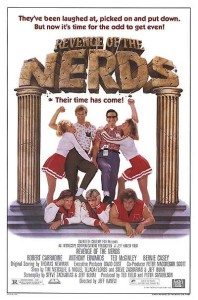 When I was 13, Revenge of The Nerds appeared as a kind of holy grail of R-rated comedies I couldn’t possibly get my parents to take me to. I had to wait months—months!—for the videotape to be released. I then joyfully rented it from the lovely Korean couple at my local video store (who either didn’t know or didn’t care about those pesky ‘ratings’, bless their hearts), copied it (a friend’s mom owned two VCRs, bless her heart) and watched it one million times (approx.) over my remaining teen years.

I watched it for the first time in 25ish years the other night at a packed SF Sketchfest screening, with the cast of the movie on-stage for a pre-show interview. Nice folks, those Nerds actors. They loved making the movie, even if, as Curtis Armstrong, famed player of Booger in the film, related, people still yell, “We’ve got bush!” at him in public. Referring to a line in the movie. If you haven’t seen it. A line not related to either future U.S. President.

Here’s what I learned about Revenge of The Nerds, as an adult viewer, 30 years (egads!) after its release: it’s an interesting movie. It’s even, I was surprised to see, well made. I remembered it being pretty trashy, in a filmmaking sense, but it really isn’t. Director Jeff Kanew does a fine job with what at the time was considered junk. He’s not John Landis, but still, it’s a smart, fast-paced, sharply edited movie. 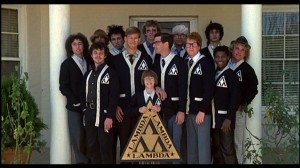 Back in ’84, the word “nerds” didn’t have the meaning it does at present, which is something to the effect of “They who, by running the entertainment and technology industries, decide what is cool.” Nerd was a concept far enough under the radar that the New York Times felt it necessary to quote the dictionary definition in their review (they hated it? no way!) for potentially confused readers, to wit, nerd: “persons regarded as contemptibly dull, unsophisticated, ineffective, etc.”

The characters in the movie aren’t at all a bunch of computer aces or video game addicts or comic book artists or cosplayers or, say, movie obsessives. Ahem. The two lead characters, Lewis and Gilbert (Robert Carradine and Anthony Edwards), are the two classic nerds: button up shirts, pocket protectors, thick glasses, dorky laughs, smart. Next closest is Wormser (Andrew Cassese), a genius 12 year-old. 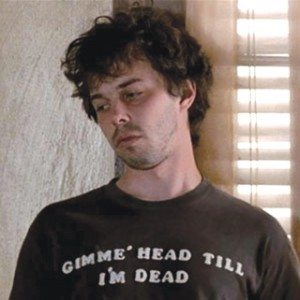 The other characters are classic ‘80s “losers.” Like the gay black character, Lamar (Larry B. Scott), played with exuberant flamboyance. The Japanese character, Takashi (Brian Tochi), whose laughable accent and terrible poker skills suggests he’s dumb as a post. The music nerd violin player, Poindexter (Timothy Busfield), who’s blissfully unaware of possessing a penis. And of course, Booger, who’s more like a depraved punk. He has all the best lines. These characters are on the one hand outrageous stereotypes, yet on the other hand they’re portrayed in the most positive light possible. They’re the heroes. The entire movie is designed to make you side with everything they do. Which is important later on. But first, let’s talk about Animal House.

Animal House came out in ’78. Its success is why Nerds (and Porky’s, and many other still lesser lights) exist. In Animal House, the Delta house denizens are also the heroes, but unlike in Nerds, they’re hardly what you’d call losers. They are, rather, incredibly cool. At least if you have any counter-culture fuck-authority attitude in you. You do, don’t you? You should. 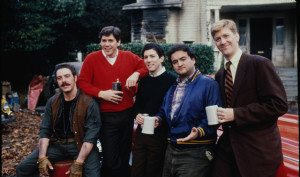 Was it over when the Germans bombed Pearl Harbor?

There’s Belushi as Bluto, the model for Booger, the two freshmen, Pinto and Flounder, sort of pre-nerd nerds, and all kinds of cool guys like Otter, Boon, and D-Day, who drink liquor, dress nice, have lots of sex, and drive motorcycles up stairwells.

In Animal House, the Deltas have no plans to “win” the homecoming parade with an awesome float. They’re not out to impress anyone. They create a Death Mobile. They cause massive destruction and mayhem. Their goal isn’t to fix the system—it’s to destroy it. They are anarchy personified. Leading up to that finale, Otter has sex with the dean’s wife, the dean’s underage daughter screws Pinto, and they all cheat on tests, throw toga parties, and generally have a really great time. 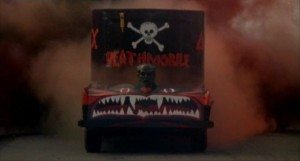 In Revenge of The Nerds, the nerds don’t want to destroy anything. Their goal is to win the Greek Games at homecoming. Why? So Lewis can be president of the Greek Council. They want to work within the system to ensure that all students are respected, not just jocks and sorority girls. They want to be treated with basic human decency. Brings a damn tear to one’s eye. 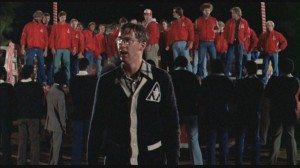 And I mean seriously, it brings a tear to one’s eye. The ending of the movie could not be more wholesome, honest, sincere, and, in terms of its message, genuinely good. All people should be respected. Weirdos and outsiders shouldn’t be mocked. Everyone should be seen as equal, no matter who they are, or what they look like. How can you argue with that? Are you listening, mean old New York Times reviewer? Have you no heart?!

It’s no wonder Nerds has become a kind of classic. In the ’80s and earlier, to be at all like any of these characters was to be hated, mocked, abused, etc., etc. You did not get dates. You were kept well on the outside. This movie spoke to a lot of marginalized kids.

Today being a “nerd” is being part of the establishment. Look at something like Tron: Legacy, where the computer gaming hero is a rich white playboy who base jumps off skyscrapers and races sports cars between genuis hacking sessions. What an insulting fucking movie that was. How is a dorky kid supposed to find inspiration there? 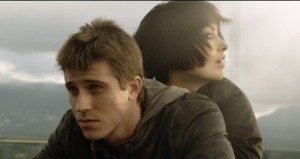 Oh, the pain of being a modern day “nerd”

Also intriguing is the race angle. The nerds apply to become a member of a national fraternity. Only one will consider them: Lambda Lambda Lambda, an otherwise all-black frat. U.N. Jefferson (Bernie Casey), head of the Tri-Lambs, doesn’t like the nerds at first—they are, after all, nerds—but he’s willing to give the nerds a chance, if they can prove their worth. This requires throwing a cool party. 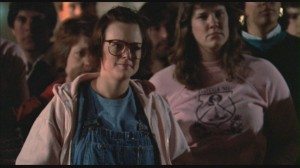 The nerds plan their party, but they’ve got no dates. Out of the blue, the sorority sisters of Pi Delta Pi (ha ha), led by Betty (Julia Montgomery), say they’ll attend, but then—they don’t. Drat! Luckily, Gilbert has a nerd girlfriend who invites her sorority sisters over. They’re the Omega Mus—and they’re all fat. They are moo-cows. Hilarious, right? Still and all, they show up, Booger gets everybody stoned, including U.N. Jefferson, and a grand time is had by all. Lewis even gets laid (with, it should be noted, the seemingly lone thin Omega Mu).

And then the evil frat, the Alpha Betas (that’s the name of an old grocery store chain, for all you young’uns out there, har har), led by Stan (Ted McGinley) and Ogre (Donald Gibb), release a bunch of pigs into the party.

Also? They leave a giant burning NERDS sign on the lawn. It’s almost like a burning cross, you might say. U.N. Jefferson is not amused. The nerds are accepted into Tri-Lambda.

Did Revenge of The Nerds just equate burning crosses—and all that implies—with being socially shunned at college? It did. Wisely, this is not spoken aloud in any way, but there it is. Interesting, to say the least.

Then there’s the rapey bits.

Yes, times were different in the early ‘80s, but, even if one enjoys the movie, one has to admit that it is, on the whole, sort of jaw-droppingly sexist. 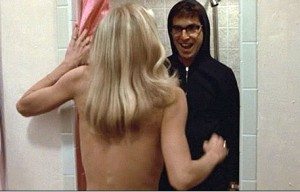 In Animal House there’s a sequence where Bluto leans a ladder against the sorority house, climbs up, and ogles the naked girls. He’s so stunned he tips over backwards. A little instant karma for his peeping tom ways. In Nerds, the nerds stage a panty-raid on the Pi house. Breaking and entering, sure, but it’s college, right? All in good fun. Thing is, the raid is a distraction. The real mission is to drill holes in the ceilings of bathrooms and bedrooms and install remote controlled cameras.

Back at their house, the nerds watch the girls undress on their TV. For days on end. Hooray! Only yeah, wait, that’s profoundly creepy and illegal. But they’re nerds! Technological prowess has brought them nudity and revenge!

Next it’s time for the Greek Games. One of the events seems to be a “selling crap” competition. The Pi girls and Alpha Beta guys have a kissing booth. The nerds sell pies. The pies are hugely popular. Why? Because in the bottom of every tin is a topless photo of Betty, nabbed from a spy cam. Another delightful prank. 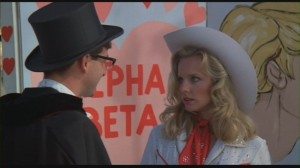 Finally, Lewis dons a mask and cape that frat-man Ted was wearing, and follows Betty into the funhouse. She pulls him into the moon-room and spreads her legs, thinking he’s Ted. Lewis goes down on her. She loves it. It’s the best Ted’s ever been! Lewis pokes his head up and reveals himself. Betty screams, knees him in the balls, maces him, and calls the police. Lewis spends the next five years in jail.

Kidding! Lewis reveals himself. Betty, profoundly moved by Lewis’s adept tongue, instantly falls in love with him. They fuck. And wind up together at the end of the movie. Which is like five minutes away. 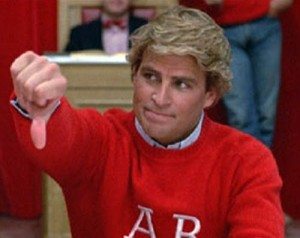 At the time, when I was 13, this was entirely plausible. “All we think about is sex,” says Lewis of nerds. I knew that much was true. Certainly she falls for him, I thought. That Ted guy is a jackass. Now that I’m not 13, I can see how this scene is a tad on the extremely disturbing side.

The thing is, those questionable moments fly right by. You almost, but not quite, don’t notice them amid the reasonably funny jokes and the gee-whiz uplifting ending. The huge crowd I saw the movie with, men and women, loved every minute. 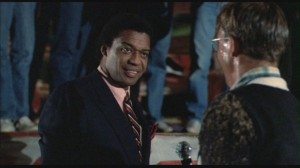 The finale features the nerds as a Devo-like band, with a bonus rap by Lamar. I guess they rehearsed off-screen. But alas, led by their asshole coach (John Goodman, giving it his all in an early role), the jocks attempt to kick nerd ass, but that’s when the real Tri-Lambs show up: a whole bunch of black men, by definition a scary sight to these white college boys. Jefferson lets Gilbert make his inspirational speech. The dean, also a meek nerd, finally stands up to the coach. Betty clings to Lewis. The jocks are humbled. The only way this ending could have been happier is if Jesus himself descended and placed angelic halos on the head of every nerd. 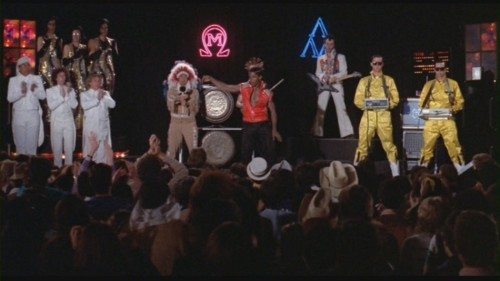 I don’t think it’s unreasonable to say that Revenge of The Nerds is truly one interesting fucking movie for a trashy teen comedy made in ’84. It surely contains any number of questionable scenarios and potentially offensive characterizations, yet it’s also a disarmingly sweet, genuinely good-hearted riff on being okay with who you are, no matter the odds. Curious.