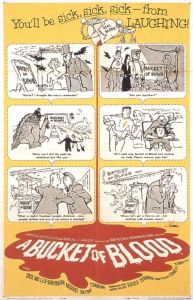 Given $50,000, leftover sets from a high school movie, and five days to shoot by American International Pictures, could Roger Corman direct a horror movie? Corman thought so. He got together with screenwriter Charles B. Griffith and together they conceived of a movie more comic than horrific, one that skewered beatniks and the art world, and that took its inspiration from the classic ’33 horror movie, Mystery of The Wax Museum, about an artist turned murderer whose victims he turns into wax sculptures.

A Bucket of Blood (’59), they called their little movie. Catchy. Doesn’t really have to do with anything, though to be fair, there is a bucket that fills up with blood in a particularly funny scene.

It’s set largely in a beatnik café where poets and musicians make with the art. The lone busboy is Walter Paisley, played by the great Dick Miller, an ineffectual, not very bright weirdo the artists treat as a kind of pet. Inspired by the dramatic beat poem that opens the movie, Walter decides to make his own art. 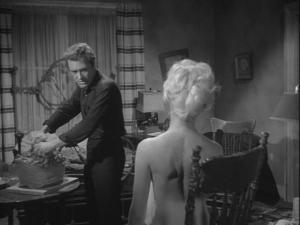 Walter and a new piece

At home, he wrestles a piece of clay into a face. It looks about as good as a clay face made by a two-year-old. But after an unfortunate incident involving his landlady’s cat and a knife, Walter finds inspiration, and shows up at work with his first geniune piece of sculpture: Dead Cat. It’s a hit.

At 66 minutes, A Bucket of Blood isn’t going to bore you. There’s no more plot to go into. We all know how the art world works: one piece is never enough. Where’s the next one? Pressed to produce, Walter makes some bold choices.

Sure, it’s a silly movie, but it gets to the heart of beatniks and artists with impressive economy. Miller is hilarious as this feeble milquetoast turned important artist. Griffith is a smart screenwriter, much smarter than material like this would suggest. The beat poems are great, and the one-liners are brutal. My favorite comes after Walter’s first success. Thrilled, he asks his boss if this means he’s a real artist now. His boss answers: “Yeah, you’re a real artist now. Now go in back and scrub down those garbage cans.” Yep. He’s an artist, all right. 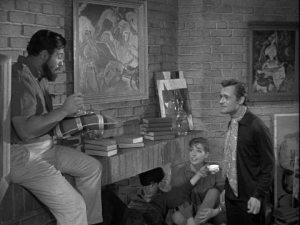 Walter chats with the poet

The movie did what it was supposed to do: make money. Pleased with their blending of comedy and horror, Corman and Griffith came up with another movie, and shot it using the same sets yet again: The Little Shop of Horrors. It’s even better, but you know that, having recently watched it as a part of this fear-of-plants double bill.

A Bucket of Blood‘s other claim to cult movie fame is the name Walter Paisley. Miller would go on to play characters with the same name in five other movies.

A Bucket of Blood is some damn fine low budget entertainment. Check it out.