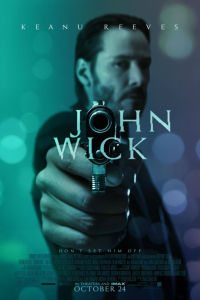 There is a new Keanu Reeves film out entitled John Wick. I went to see it because I enjoy watching people being shot in the face on occasion.

By which I mean that, on occasion, I take pleasure from watching violent films that feature a comic book aesthetic and unchallenging plots. I don’t mean that I enjoy watching particular people being shot in the face time and again. Once is usually enough — unless you’re a foe of John Wick’s, in which case, fuck it.

Better safe than sorry, so shoot everyone in the face a couple of times. Always put one in the brain and all that.

Like The Raid did more acrobatically and Point Blank did more stylishly, John Wick serves up a frosty dish of mano-a-everyone else-o. Guess who comes out ahead?

Here is the story. Keanu Reeves plays John Wick. With as little fuss as possible we come to learn that he loves someone and that that someone, anyway, she dies. She also, in an act from beyond the grave, sends him a puppy so he won’t have to grieve alone. 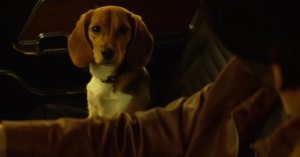 Do not get too attached to this puppy.

It is a damned cute puppy. It is even house trained through some miracle of cinema. You would be very happy to have this puppy.

As is John Wick. He takes his puppy for a ride in his impressive muscle car and catches the eye of a Russian gangster’s scion, Iosef, played unimaginatively by Alfie Allen, who’s much better in Game of Thrones as the remains of Theon Greyjoy. Iosef and his entourage break into John’s house, beat him with a metal bat, kill the dog, and steal his car.

Bad move, Iosef. John Wick is the baddest mofo assassin you ever did done see. And you killed his puppy. Which was HOUSE TRAINED. A house trained puppy! Do you have any idea? No. You don’t. And now John Wick is going to have to kill every Russian in the tri-state area on his way to killing you.

That is John Wick in a cracked nutshell.

It was pretty good. 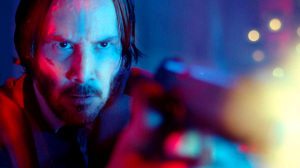 You have made me angry and hirsute.

Lean and uncomplicated, the film doesn’t waste much time on world building or character development. It’s no Die Hard, but it isn’t painfully stupid or so filled with preposterous action sequences that your eyes fall out of their sockets and go rummaging around the cinema floor for loose change. When the bad men get in John Wick’s way, he kills them, thoroughly, and without unnecessary acrobatics. If he’s got a gun, which he usually does, he shoots them in as much of their face as his bullets will fit.

If he’s trying to teach his enemies a lesson, here is what it is: your face is not a secure receptacle for bullets.

For this simplicity, I applaud Mr. Wick and even directors David Leitch and Chad Stahelski, plus too the screenwriter, Derek Kolstad. Only once do they make us suffer through the “and now let us fight like men without guns” malarky and that’s over pretty quick. Also good, the film’s visual tone, which finds a classic graphic novel feel and sticks with it. This is not a comic book movie like the pre-fabricated Marvel stuff, it’s a comic book movie like a movie made by people who grew up reading comic books and understanding that style of storytelling. It runs a little thick when the subtitles following the Russian gangsters jump into colored ALL CAPS for accentuation, but on the whole: fine. 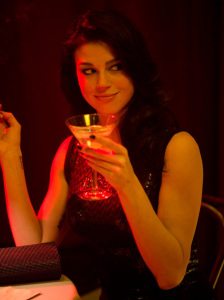 Hello. I was Wonder Woman but now I’m not.

Over the length of John Wick, mostly what you get is Keanu Reeves painting the town red. Willem Dafoe and Adrianne Palicki show up as assassins of questionable loyalties, both Lance Reddick and Clarke Peters of The Wire get bit parts, as does Ian McShane, and somehow I missed David Patrick Kelley, whom the internet suggests was in this movie.

Oh well. Maybe I didn’t recognize him with all those bullets in his face? It happens.

John Wick gets a little monotonous with all the killing. Also, the script takes some odd turns from stripped down revenge thriller into campy secret society of assassins territory, but let us not forget: this is a film about people being shot in the face. It’s not Hamlet. It’s not even Green Eggs and Ham.

But I enjoyed it well enough. I like to watch people get shot in the face occasionally. Particular people, over and over again. I’m making a list now, in fact. Better hope your name isn’t on it.