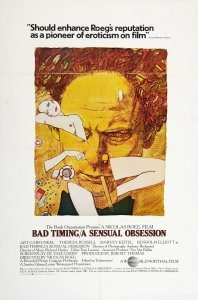 If you’ve been itching to see a naked, sweaty Art Garfunkel raping an unconscious-due-to-suicidal-drug-overdose Theresa Russell, boy do I have the movie for you! It’s called Bad Timing, it’s from 1980, was directed by Nicolas Roeg, and, upon seeing the completed movie, one of the execs at the distribution company called it “a sick film made by sick people for sick people.” Normally a statement like that is catnip to me, but having now watched Bad Timing, I find myself admitting that he’s got a valid point.

I watched Bad Timing on a Criterion Collection DVD, so presumably someone at Criterion is a fan of naked, rapey Art Garfunkel. Or maybe because it had never had a proper home video release, the good folks at Criterion were merely doing their part to see that the work of a respected director wasn’t lost. Even if that work is kind of abominable.

Are there people who like Bad Timing? Maybe they will stop by and explain themselves. After watching it I felt like Theresa Russell’s character, Milena: suicidal and violated.

The not even remotely happy couple

I’m a fan of Roeg’s The Man Who Fell To Earth, but in Bad Timing he lets his arty pretentious side ran rampant. The story is about a relationship between Milena, a young women, and Garfunkel’s Alex, an older psychiatrist and professor, but it’s told out of sequence, with the kind of editing that shouts EDITING at you for two hours straight. Even worse is the sequence tying the movie together, the aftermath of Milena’s suicide attempt, in which we see her rushed to the hospital and operated on.

Any time Alex remembers having sex with Milena, Roeg intercuts the sex with doctors slicing open her trachea and whatnot. Because that’s, like, art, man. 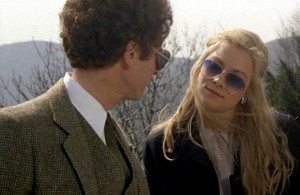 I think they were happy for a second here?

As for the relationship, it’s a nightmare from the start, despite almost every scene mostly consisting of Alex and Milena, after yelling at each other, wistfully wishing to recapture the way they were in the beginning. Astute viewers might ask where this beginning was, and why we didn’t get to see it.

The movie treats its protagonists fairly. Neither alone is to blame for their terrible, miserable relationship. Alex is a needy, pretentious control-freak, and Marlena is a dim-witted, promiscuous flake. It’s hard to decide whom to hate more. That is, until the end. At the end any sensible viewer would like to see Alex thrown off a high bridge, preferably by Milena, but alas, it’s not to be.

Who else is in the movie? I’m glad you asked. Harvey Keitel plays a cop with creepy issues of his own, or so we must surmise, given Keitel’s exceptionally weird performance. If you’re a glutton for punishment, I recommend a twisted Keitel cop double bill of Bad Timing and The Bad Lieutenant.

Why is the cop bothering Alex? Because it appears that Milena is suffering the effects of the OD as though she took the drugs many hours prior to arriving at the hospital, as though Alex didn’t bother calling the ambulance for some reason. Which reason, creepy Keitel intuits, is that Alex wanted a little unconscious love, and maybe wanted to see her die, too? Could be, could be.

Bad Timing reminded me of Polanski’s 1992 relationship-from-hell movie, Bitter Moon, which charts the course of a relationship from infatuation to deepest love to violent, bitter end. It’s infinitely better than Bad Timing. Which is I guess the main reason it came to mind.

I’d like to say something nice about Bad Timing. Um. Denholm Elliot! He’s in it too. He doesn’t really have anything to do aside from speak in an eastern European accent, but he does so brilliantly.

Aside from that, I guess the best thing I can say about Bad Timing is that I didn’t actually attempt suicide while watching it. I only contemplated it. Thank you and goodnight! 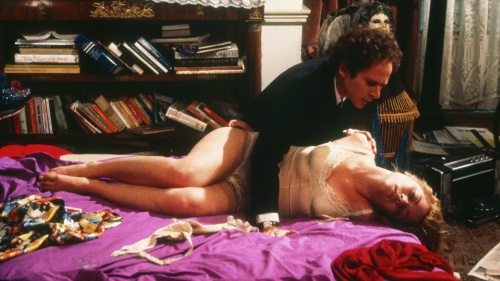 I think I speak for everyone watching this movie when I say: don’t do it!