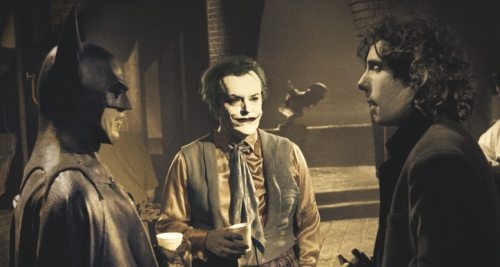 Time and franchise rebootings have not been kind to the legacy of the Tim Burton version of Batman.

The 1989 blockbuster seems in retrospect to be an airlock between the campy Adam West TV show of the 1960s and the acclaimed and super serious Christopher Nolan Dark Knight trilogy. Some blame it for ushering in the marketing first, quality of movie second mentality of the current tentpole age.

The film is clumsily plotted, uneven, makes some bizarre choices (Joker killing the Waynes? Vicki Vale in the Batcave?), focuses on Robert Wuhl over Commissioner Gordon and, oh yeah, it doesn’t have a climax.

Even the two celebrated lead performances have taken a hit. Jack Nicholson‘s Joker has since been overshadowed by Heath Ledger’s Oscar winning portrayal. And Michael Keaton is currently parodying the memory of the role in Birdman.

But rewatching the movie recently made me see that a few things hold up a lot better than I would have thought. So instead of dancing with the devil by the pale moonlight, let’s list the good parts! 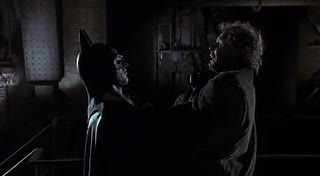 1. They did not start the movie with Batman’s origin

But the audience in 1989 was used to the goofy 1960’s Batman. Best show them a different version at the top and start the movie with a bang. “I’m Batman!” You’re damn right you are!

(Plus it’s the best scene in the movie.) 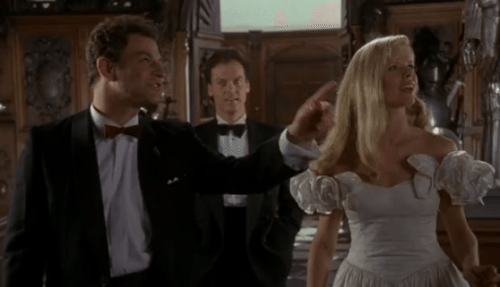 2. Batman and Bruce Wayne being mysterious was a cool idea

From the start we see that the crooks, cops, politicians and the press aren’t sure if Batman is real or an urban legend. Even Bruce Wayne is a mysterious fellow who is absent at civic functions and who nobody seems to know.

It would have been nice if a stronger actor than Robert Wuhl played Knox (they exist.)  And an actress with more of an edge than Kim Basinger could have made searching for Batman while falling for Wayne more interesting.

But making the title character an enigma to be fleshed out over the course of the film is a fresh and unusual, if not totally successful, structure for a superhero film. 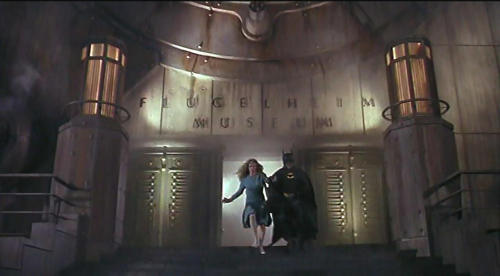 The production design was acclaimed when it came out and earned the film an Oscar. But wow! In retrospect, it is so refreshing just to see sets! Anton Furst and company built an actual physical environment where people are walking and interacting with buildings and objects.

Watching a CGI free blockbuster was such a treat. 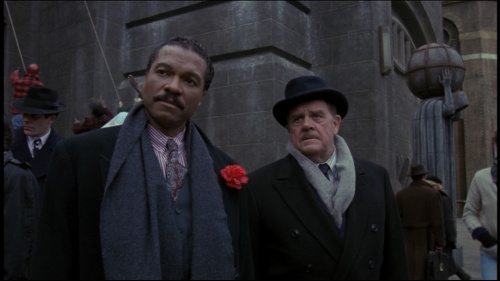 The film was released in 1989. But save for the odd Prince musical numbers, you’d never know it. No Hammer pants. No ’80s fashion. Then men (even the gangsters) are dressed in suits straight out of the Golden Age, and Kim Basinger has a classic Veronica Lake style.  The film exists in no real time, which helps it age.

5. Danny Elfman’s score is one of the best ever

Producer Jon Peters tried to get John Williams to do the score. He passed, choosing to work on Indiana Jones and The Last Crusade. No doubt Williams would have done an amazing job. (He tends to.)

But the ominous, dark yet thrilling and slightly humorous score by Danny Elfman is the heartbeat and pulse of the film. It holds up remarkably well, even as many of Elfman’s later scores seemed to mimic it (and Beetlejuice as well.) 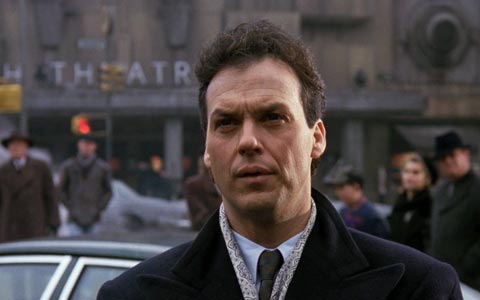 The choice of Keaton as Batman was hated at first. No doubt people thought he was going to be manic like in Night Shift or Beetlejuice. Instead his entire performance is held close to his chest, maintaining the Batman and Bruce Wayne as a mystery theme.

Keaton does not cry at the spot where his parents are killed. He barely speaks when in costume. Even his love affair with Vicki is devoid of a big romantic moment.

Remember most audience members’ last memory of Batman was Adam West as a talkative Boy Scout doing the Batusi. So Keaton’s minimal performance allowed the audience to fill in the cracks while wanting more. 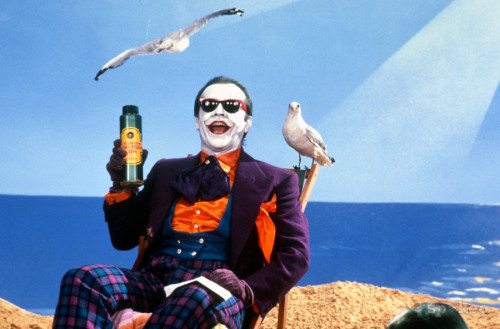 7. The Joker’s obsession with beauty

All of The Joker’s actions have a link to making beautiful people ugly. He scars Jerry Hall’s face. His first victims are both models. He tampers with beauty products so anyone who tries to make themselves more attractive might die. Even the slick polished TV anchors are forced to be shown with all their blemishes.

There are even some subtle touches like his calling Vicki Vale’s fashion portfolio crap but being impressed by the war photos. When the Joker destroys the art in the museum, he spares only one picture: it’s dark and far from pretty.

Remember Jack is introduced as a vain man who brushes off Jerry Hall’s compliments with a condescending “I didn’t ask.”

In a blockbuster today, the Joker would have a long monologue about how he plans to destroy all beauty because he himself can no longer be beautiful. Burton made it subtext. 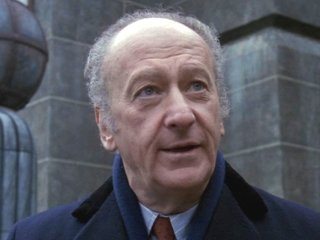 8. Casting Lee Wallace as the Mayor

One of the few nods to the 1980s was casting character actor Lee Wallace as the Mayor. He just happened to look and sound exactly like former New York Mayor Ed Koch. The real life Koch oversaw the post bankrupt New York of the late 1970s through the 1980s with varying degrees of success. By 1989, New York was still pretty dirty and filled with crime. Gotham City was a little bit worse, but seeing a Koch look-alike in City Hall was a not so subtle dig. 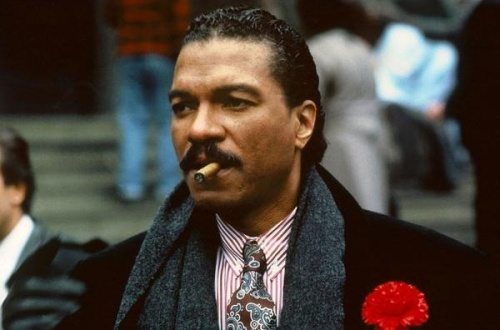 9. There was only one villain

Casting Billy Dee Williams as Harvey Dent was a fabulous color blind decision. Of course he captures the charm and charisma of Gotham’s DA before his eventual disfigurement. They dropped the ball in not following through with Billy Dee in the sequels (and giving us a rare lousy Tommy Lee Jones performance in the third one).

But wisely, they did not try and cram in Two Face’s origin story. One problem with every other Batman movie (from the Adam West theatrical feature through the Dark Knight entries) is the excess of bad guys. They all have at least one villain too many and not enough time to give each a chance to shine.

This film? The moment the Joker kills Jack Palance (another inspired piece of casting by Marion Dougherty) there’s only one person left for Batman to fight. And speaking of streamlining the story… 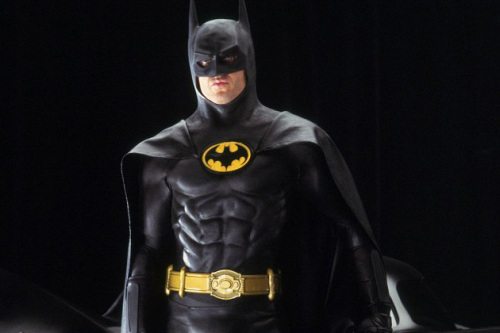 It’s easy to forget how risky this was. Anyone who wasn’t a comic book fan (which in 1989 was most everyone on planet Earth) would expect to see Batman teamed with Robin. They were partners. The basic story would have to be Batman AND Robin fighting crime.

Early drafts tried to shoehorn Robin into the storyline. The early drafts of Burton’s sequel, Batman Returns, tried just as hard. But in the end, these would be solo films. Today, INCLUDING Robin in a film seems absurd. Nolan kept the name Robin as an in-joke at the tail end of The Dark Knight Rises, but the Boy Wonder is nowhere to be found.

I’m not sure how the clumsily titled Batman vs. Superman: Dawn of Justice will turn out. Call me cynical, but I doubt they will get as much of Batman right as Burton did.

If nothing else, the 1989 film paved the way for audiences to accept a darker and more serious Batman. This led to the wonderful animated series and the acclaimed Nolan pictures. And it also led to people rejecting Joel Schumacher’s campy incarnation.

And oh yeah, it made a lot of people very very rich.