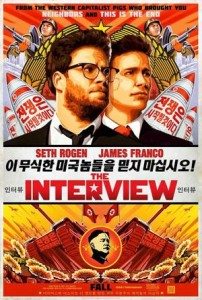 The Interview isn’t a surprisingly bad film. It is, rather, exactly as bad a film as you’d expect, given that it stars James Franco and Seth Rogan and that it almost killed us all in an apocalypse of nuclear fire, identity theft, and bad grammar.

If the film had not threatened us with those things — if it had just been a silly film by silly men — people would have gone to see it and said it was funny while others would have declined to see it, assuming it wasn’t funny. You probably would have watched it on Netflix streaming in three months during a bout of insomnia and felt about it similarly to how you feel about leftover meatloaf that tastes suspiciously fizzy. 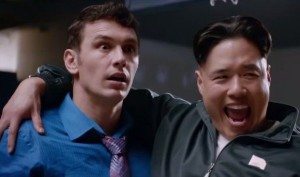 That’s not how it went down, though. Due to situations of an extremely bizarre nature, The Interview, became the whipping boy for Sony Pictures Entertainment, the hackers who hacked them, and all and sundry from sea to shining sea.

So I watched it. Leaving aside its undeserved international provocateur status, here’s what I can tell you.

The Interview is completely devoid of subtext. Shocking, right? But true.

This fantasy, on the surface, appears to follow a stunningly idiotic and irritating television presenter (James Franco as David Skylark) and his marginally less idiotic producer (Seth Rogan as Aaron Rappaport) as they land an interview with Kim Jong-un (Randall Park). The pair are enlisted by the CIA (Lizzy Caplan as Prominent Cleavage, I mean Agent Lacey) to kill the dictator and save the world from North Korean insanity.

Underneath this veneer, however, the film is much more. I mean less. It’s much less. About 96% of it is thin and bludgeoned jokes about shitting yourself, vaginas, rectal insertions, and genital odors.

It is to Team America: World Police what Porky’s was to Ghost World. 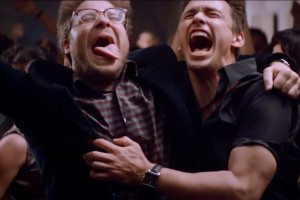 Randall Park is charming as Kim Jong-un. Based on the quality of the rest of the script (by Dan Sterling), I’m inclined to think the credit for this character belongs to the actor. Diana Bang is reasonably fun as Sook, the traitorous femme fatale who serves as Rogan’s love interest. Rogan himself isn’t bad, but James Franco outdoes himself with what is possibly the laziest, least considered, lousiest performance of his or anyone else’s career.

He’s like that guy at the party that thinks he’s funny but whom everyone else wants to feed into the wood chipper. It would be hard to like him or his character less, unless he was actively murdering kittens with a garlic press.

The Interview plays out exactly as you’d expect, except with way too many Lord of the Rings jokes. I snickered a few times — mostly at Rogan’s character having his fingers bitten off, but that’s just me.

It is slightly less believable than a film like White House Down and slightly more juvenile than a fistful of sperm.

I do not recommend you watch it, particularly if you are within reach of James Franco and a wood chipper.

4 responses on “The Interview Asks Practically Nothing of You”