In the wake of Selma‘s almost total Oscars shut-out and Caucasian Americans and Brits filling up the cast of Exodus: Gods and Kings, 2014 was a rotten year for black actors and actresses being recognized for their fine work in film.

It is safe to say there were other events last year that made it uneasy to be African American as well.

Plenty of movies have white actors playing different races, from Olivier’s Othello to Angelina Jolie in A Mighty Heart. But how often does an actor of color play a white historical figure? Not often, which brings me to the casting experiment I am proposing. Remember the film White Man’s Burden with John Travolta and Harry Belafonte? In that film, every white character was played by a black actor and vice versa. It was a nice idea even if the film did not totally work.

I want to see the same race reversal in a historical movie featuring a predominantly white cast deciding the fate of black people. That’s right. I am talking about a shot for shot remake (a la Gus Van Sant’s Psycho) of the Steven Spielberg epic, Lincoln. Let’s take a great movie about freeing the slaves and switch the roles. And seeing that this is a Hollywood Oscar film, most of the faces will now be black with one or two token white ones thrown into the background.

Who would be the stars? Spielberg’s cast was chock full of stars and respected actors. My proposed cast will be as well.

Any discussion of the greatest living film actors has to include both Denzel Washington and Daniel Day-Lewis. Who else commands the screen like Denzel? Who else can both carry a film on his own and make the actors around him look better more effectively than Denzel? Well, maybe Daniel Day-Lewis. A marquee that reads “Washington IS Lincoln” would be reason enough to make the movie.

At first I wasn’t sure which actress could project enough gravitas to stand alongside Denzel Washington’s Lincoln. But after kicking around Angela Bassett, Viola Davis and Alfre Woodard, I realized that Oprah would not allow this film to be made without her. Besides, she’s worked with Spielberg before (The Color Purple) and she wouldn’t have to worry about her weight playing Mary Todd.

Thaddeus Stevens needs to be tough but with a sense of humor and be played by an actor respected enough to stand up to the star playing Lincoln. Jackson fits the bill perfectly. Picture Sam Jackson tearing congress a new one. It would be his best role since Pulp Fiction. And he worked with Spielberg on Jurassic Park.

(Played by Jared Harris in Lincoln)

In Lincoln, General Grant has a moment with the President where he talks about how the war has aged them both. Who better than Glover to deliver the sentiment of “I’m getting too old for this shit”? 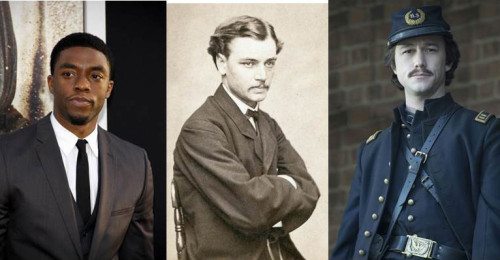 Chadwick Boseman is young enough to be Denzel’s son but has enough on-screen presence that he could believably attempt to defy his imposing father. Compared to playing Jackie Robinson and James Brown, being a headstrong son would be a breeze for the talented Boseman.

Both Strathairn and Ejiofor are outstanding Oscar nominated actors who don’t try to outshine the big stars. I can also neither pronounce nor spell either of their last names.

Preston Blair needs to be considerably older than Lincoln and believable as a senior adviser. Both Gossett and Holbrook have those qualities. And like Holbrook before him, Gossett will prompt the audience to sit up and think, “Oh man, I forgot he was still alive!”

Fernando Wood needs to be a fiery orator who conveys outrage and anger from the floor of Congress. Can you name one person in history who acts angrier than Delroy Lindo? Just one? Didn’t think so.

The Confederate States of America’s Veep attempts to intimidate Lincoln and has harsh words for him face to face. Rorschach delivered the lines in the original. Why not have Omar Little do it in this version?

The nervous congressional ally to Thadeus Stevens was played by the guy who was Gale Boetticher on Breaking Bad. Maybe the man who was Gus Fring would be a more confident choice! 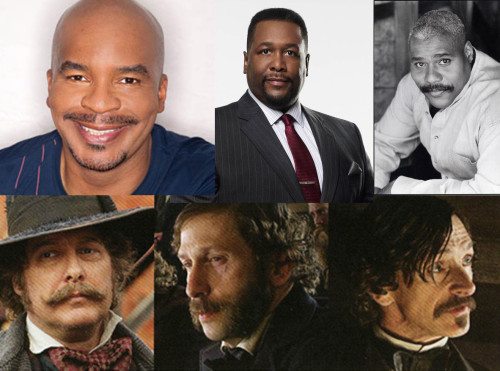 This trio provides the cynical comic relief in the film while bribing and buying politicians. Grier is a hilarious and talented actor, much like James Spader. And I can’t resist essentially seeing Bunk from The Wire and Radio Raheem from Do The Right Thing in period clothes.

While watching Spielberg’s production of Lincoln, I sat looking at the fine actor playing Stanton thinking, “Is that D-Day from Animal House?” Lawrence Hilton-Jacobs is a capable actor and I want the audience asking “Wait, is that Freddie Boom Boom Washington?” 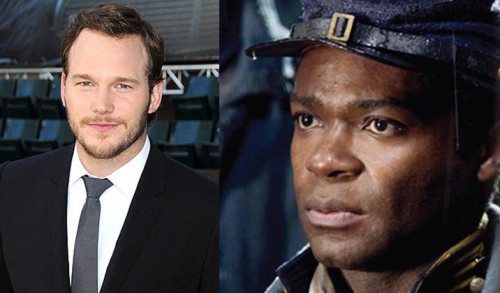 Bet you didn’t know Selma‘s Dr. King was the soldier at the beginning of Lincoln! If the races are being reversed, we need a white guy in this role. Why Pratt? Because he is in everything these days!

Now look me in the eye and tell me a film that stars Denzel, Oprah and Sam Jackson wouldn’t be a blockbuster. It might even be nominated for an Oscar.