It’s been so very many years, Mr. Boorman, and still no sequel to your 1974 ode to science fiction/fantasy/insanity, the magnificent Zardoz? That’s okay. I can wait. I know you won’t let us down.

In the meantime, Boorman has made Queen And Country, a sequel to his autobiographical WWII film from ’87, Hope And Glory, set nine years later, focusing on his alter-ego, Bill Rohan (Callum Turner), as he struggles in basic training in preparation to be shipped off to fight in Korea. 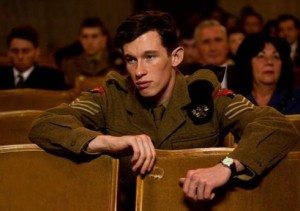 I haven’t seen Hope And Glory since it came out, so I can’t compare the two (I would have watched it again, but thanks to this marvelous space-age future in which we live and watch movies, it’s not available by any easy legal means aside from buying it or renting it from one of those odd, 20th century “video stores” you may fondly recall, the one of which nearest to me has been absent its copy for far longer than is right and proper), and not being able to compare them, I can’t tell you how much Queen And Country pales in the company of its predecessor.

Because being a sequel, it must pale somewhat. Hope And Glory was nominated for Best Picture, after all. Queen And Country will not be. Not that it’s bad, mind you. In fact it’s really rather pleasant. Its flaw is that it never rises above its pleasantness. I enjoyed watching it, but was never especially swept up, and if not for writing this little essay here, I may already have forgotten it. 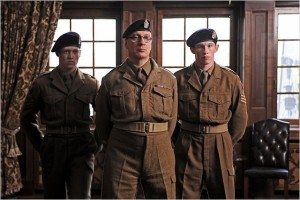 Bradley and his misbehaving boys

So we’re introduced to eighteenish-year-old Bill Rohan living with his family on a tiny island in the Thames, like you do, from which he espies movies being made by filmmakers working for the nearby movie studio, when, alas, he’s conscripted.

He meets another conscriptee, Percy (Caleb Landry Jones), who’s more or less crazy. Jones plays him with a kind of outlandish vigor, let’s say. These two charming lads spend the rest of the movie screwing around, getting into small amounts of trouble, and certainly never winding up in Korea.

Proving themselves to be quite worthless, they’re put in charge of training the male typing pool. Overseeing them is Bradley (David Thewlis), a man enamored of the rule of military law. If you guess that his unpleantness has something to do with whatever horrors he faced in WWII, then you too have seen war-training movies before. In charge of them all is Major Cross (Richard E. Grant), who spends most of the movie annoyed that everyone around him is a moron of one kind or another. 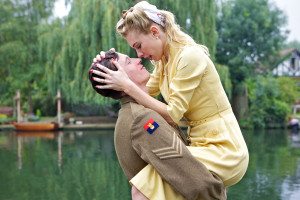 In fact that’s his sister, a rather lively soul

Also working for Bradley is Redmond (Pat Shortt), a self-declared master of skiving. A skiver, for you non-Brits out there, is one who evades any sort of work whatsoever. A master dodger, let’s say. One who slacks off so evasively that the amount of one’s slacking is never consciously noted by those in charge. He trains Bill and Percy in his masterful ways, but Percy, alas, is not one for subtlety. He makes off with a cherished clock, an act that will have grave repercussions for them all.

Well. “Grave” is overstating it. In any case, his theft causes some amusing troubles. 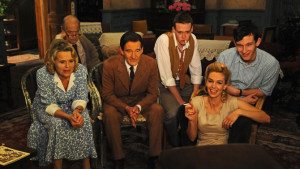 Watching the coronation of the Queen

Nothing much that happens in Queen And Country hasn’t happened many times before in nearly identical movies about growing up and goofing off and getting laid. A warm reminiscence, we might call this movie. Nothing to trouble you. No hard questions posed. Fond nostalgia is the only thing at work here.

That’s not entirely true. The point of setting the movie when it’s set is to suggest a fading of an one era and the rise of a new. The old military men are stuck up or insane, their methods senseless in the new world dawning, while the young men are irreverant and bold and unconcerned with outmoded rules of behavior. Or so I suspect was on Boorman’s mind. The movie ends up being too light and pleasant to dig into this notion with any gusto.

It ends (remain calm, how could I really give anything away in a warm reminiscence?) with Bill filming the girl he winds up with (see how I maintained the surprise there?) with a shiny new amateur movie camera. Perhaps for part 3 Boorman will jump ahead still more years in his eventful life, and finally, at long last, document the dreaming up and eventual filming of Zardoz. A story that needs to be told, if ever there was one. 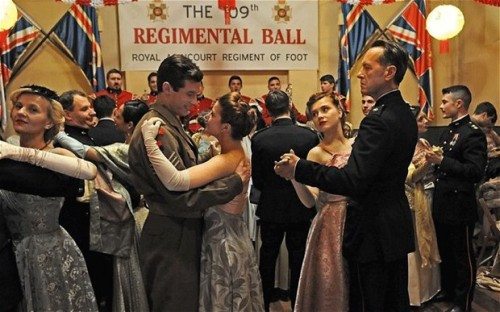 Richard E. Grant does not approve