In the magical world of my somewhat misshapen brain, Mr. Show is the second greatest sketch comedy show ever, after Monty Python’s Flying Circus. I destroyed multiple videotapes watching and rewatching Mr. Show episodes. The combination of David Cross and Bob Odenkirk was ideal (not to mention the amazing actors/writers they colloborated with). My shoes hurt just thinking about it.

Was Cross’s humor mean-spirited on Mr. Show? Maybe it was. Maybe a little. Maybe Odenkirk tempered it. Because Cross absolutely has a mean streak in his comedy. Often rather a wide one. Often one taking up the whole road. Nothing he’s done since Mr. Show has tickled me the same way, I think in part because of it. 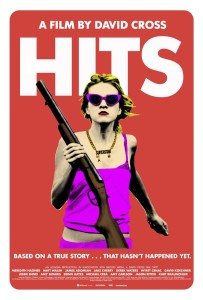 Hits is Cross’s debut as a writer/director. It debuted at Sundance in Jan., ‘14, and as of February 12, ’15, is showing up in theaters all over the country in a self-distribution scheme funded through Kickstarter to the tune of $100,000, which included such backer rewards as a walk-on in the upcoming, mysterious Mr. Show reunionish something-or-other, breakfast with Hits star Matt Walsh, and the hairs of Cross’s shorn beard. So, excellent work there, Mr. Cross. If nothing else, Hits will be a test-case for alternate means of film distribution in a cinematic landscape now based almost wholly on men in tights blowing up CGI lizard-people. So to speak.

As for the movie itself, Hits is, as they say, a mixed bag. Like one of those weird, Trader Joe’s trail mix concoctions where amidst the delicious nuts and cranberries are chocolate covered boll weevils and salted shoelace trimmings.

The story is set in upstate New York’s small town of Liberty. Matt Walsh plays Dave Stuben, recycling center employee and hoarder. Dave listens to right-wing radio and spends his off-hours writing angry letters to the city council and showing up at town council meetings ranting about freedom, the Constitution, and the unrepaired pothole in front of his house. His daughter, Katelyn (Meredith Hagner), is a white-trash teen with a dream: to appear on TV’s The Voice, and be interviewed by Ellen DeGeneres. 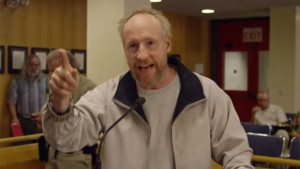 Through an unclear mechanism, Dave’s town hall rants are recorded and posted on the internet, where a Brooklyn weed-delivery dude (Michael Cera) shows them to hipster client Donovan (James Adomian). Donovan is thrilled. He sees in Dave a cause to back. Something about freedom of expression? Is that a hipster thing? Why not. Donovan creates a video montage for YouTube that I guess is supposed to represent the oppressed masses. It plays like a Colbert Report intro, with Jimmy Stewart and screeching eagle clips.

And lo and behold, it goes viral. Donovan and his friends (Wyatt Cenac and Derek Waters) head to Liberty, and so does every other Brooklyn hipster. It’s a hipster face-off!

Meanwhile, Katelyn struggles to get her The Voice demo made. Local dude Julian (Jason Ritter) demands cash and sex to help her.

Not surprisingly, her voice is dreadful.

Once and future TV stars take a break

One can’t help but think of Alexander Payne’s early movies, Citizen Ruth and Election, when watching Hits. The big difference is that where you feel Payne’s sympathy toward his characters, Cross has no sympathy for his. They exist only to be mocked. They’re uniformly awful people. His targets are big and easy, and yes, he hits them often enough to make (most) of the movie just funny enough, but there’s nothing going on in Hits aside from someone standing on a soapbox shouting “Everyone is dumb!”

Which I grant is largely true. But some sense of self-awareness on Cross’s part might have played better. The thing about making fun of hipsters is that it’s primarily other hipsters doing it without acknowledging their own obvious hipsterism. “Hipster” is a vast umbrella of a term comfortably housing, among many others, David Cross. To wit: Hits, a mocking comedy, uses for its score the multitracked cello songs of Zoë Keating. I happen to think Keating is all kinds of awesome, but I cannot imagine a more hipster way to score one’s indie comedy.

I saw Hits at SF IndieFest. Cross spoke after the film. His motivation to make it stemmed from having been so pissed off at the generic indie movies he’d been seeing every year at Sundance. 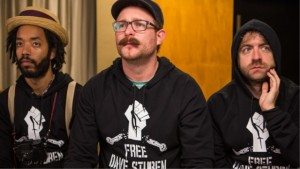 The Sundance Film Festival. Where he goes every year. Where his indie movie premiered. So says David Cross, dressed in leather boots, not-cool T-shirt, designer hoodie, baseball cap with non-baseball logo, and a scruffy beard. After screening his indie comedy at IndieFest, now to be distributed via a Kickstarter campaign. I’m surprised Four Barrel wasn’t there handing out cups of organic, fair trade civet coffee.

I say this, mind you, as a bearded, San Francisco dwelling film blogger who appreciates small batch artisanal beers and composes sonnets for his fiancée on a vintage ‘50s typewriter (which no, I do not take to coffee shops; I’m not a fucking hipster!). I make fun of hipsters as mercilessly as everyone on planet Earth, but put me in a crowd of them and, like Cross, I’d blend right in, accepted as one of their own (at least until they found my stash of live Phish audience recordings), despite, as I’m getting at, the fact that no one actually calls themselves a hipster. Hipsters are those unbelievably pretentious fuckers two tables over. 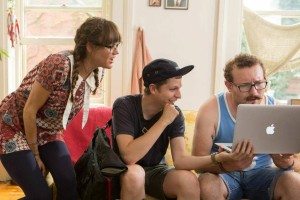 And those fuckers are easy to mock. Too easy. Everyone in Hits is too easy to mock. Pretentious hipsters and dumb small town folk. That’s it. Not a single character rises above stereotype. Hits is billed as some kind of ballsy, scathing comment on YouTube fame, and while YouTube fame is a central facet of the movie, I think Cross forgot about the “comment” part. Yes, in our media-saturated world, everyone wants their fifteen minutes. It’s been thus for awhile. At least since Warhol quipped his fifteen minutes quip. Hits isn’t commenting on this state of affairs so much as agreeing it exists.

It didn’t have to be so. I’m mystified by one thing. Katelyn, the wannabe singer, is disgusted by all the idiots on YouTube famous for being kicked in the balls. She yearns to earn fame through a legitimate TV talent search game show. So you know how the movie is going to end the second it starts: Katelyn will gain idiot internet fame and be thrilled. So why not grant the character a great voice? What if Katelyn could really sing? And yet was ignored? And only found fame through being a crazy white-trash yahoo? At least the movie would show the ease with which faux fame corrupts.

The performances are solid throughout, if not a bit broad. Most of the smaller characters are given little to do, but among them David Koechner shines as Dave’s co-worker and all around good ol’ boy, who wears an American flag/howling wolves T-shirt without a hint of irony.

And there are a few very funny jokes in here. If, say, after a few bong loads, you ran across Hits on cable one night, you’d be adequately amused. But I think Cross has a much better movie in him. If he created a central character he cared about, and explored humor at least a little more left-field than what’s in Hits, it could be grand. I’m thinking a feature length, stop-motion Limber Legs flick. Who’s with me?

2 responses on “Hits, In Which David Cross Laughs At Everyone But David Cross”