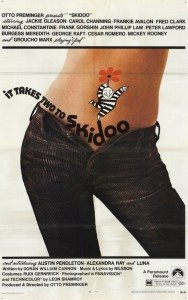 You don’t watch Skidoo (’68) so much as goggle at it uncomprehendingly. Is that–? you say, No, it couldn’t be—but could it? Oh god no. It is.

It is a comedy directed by Otto Preminger, a phrase no one, at any time in human history, wished it possible to express in anything but a madcap counterfactual sort of scenario, as in the example, “The only thing I can think of worse than worldwide nuclear apocalypse is a comedy directed by Otto Preminger.” That such a movie exists is a concept difficult to adjust to.

Perhaps we don’t have to adjust to it after all. Having now seen Skidoo, I feel it reasonable to ask if anyone, then or now, believes it’s funny. It’s funny looking, hence my goggling. But funny it ain’t. Still, a comedy isn’t a funny movie. A comedy is a movie that tries to be funny. Many fail, Skidoo more spectacularly than most.

Not exactly brimming with up and comers.

And sure, the eagle-eyed among you will note the appearance of three Batman TV show bad-guys in the cast—The Joker, The Penguin, and The Riddler—but alas, they don’t wear funny costumes, and nobody walks up the side of a building.

The ‘60s were a grim decade for studio comedies. Describing them as “painfully out of touch” would be doing them a kindness. A new age of movies was coming, and by ’68 it had arrived. Some older directors flourished in the new age—Don Siegel and Sidney Lumet come to mind—while others did not. Skidoo is a product of a cinematic age already dead. Bonnie And Clyde and The Graduate came out the year before. Easy Rider would be out the year following.

And Skidoo? I can’t imagine who Preminger thought he was making this movie for. No one else could either. The studio hated it. The critics hated it. Audiences hated it, at least the five or six of them who showed up to watch it. Preminger made it because he’d always been at least relatively near the cutting edge of social issues with past movies such as The Man With The Golden Arm, Anatomy of A Murder, Advise & Consent, and In Harm’s Way. He wanted to connect with the youth culture.

Also, he’d recently dropped acid, and wanted to make a movie about it. 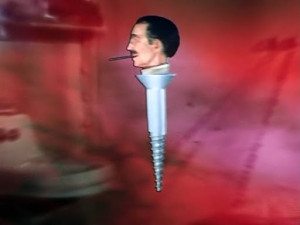 Gleason sees God on a screw

The most notable scenes in Skidoo, and really the only ones that make it worth watching (for the cinematically obsessed only, mind you), are 1) Jackie Gleason is accidentally dosed with LSD in his jail cell, and has a trip aided by visuals I’m guessing cost someone maybe five or six dollars to create, and 2) Gleason and his jailbird buddies dose the entire jail, cons and guards alike, with LSD, and everyone flips out all night long. The best part of which sequence is when two guards, one played by Harry Nilsson, hallucinate a trash bin dance number.

Wanting his actors to understand his motivations, Preminger had Gleason and Marx try LSD themselves. If only more directors today showed this kind of foresight and commitment to excellence. 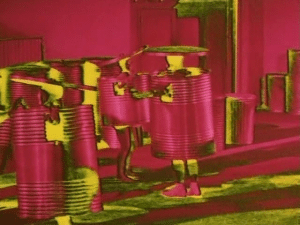 As for the story, it’s mostly absent. Gleason plays Tony, an ex-mobster called back into service by his boss, God (Marx), to whack a guy in prison. Meanwhile, Tony’s wife (Channing) and daughter (Alexandra Hay) are beset by a traveling troupe of hippies who frolic and/or pontificate hippie-ishly as needed.

Needed to do what? Beats me. I think Skidoo is maybe supposed to have something to say about youth culture? And boring adults? And maybe how one is good and one less so? Well, it would make sense. If you’re going to make a pro-drug, pro-hippie youth movie in ’68, you’re going to cast Gleason, Marx, and Rooney, am I right?

Or, if you’re Roger Corman, you’ll have Jack Nicholson write your LSD movie and cast Peter Fonda, Dennis Hopper, Bruce Dern, and Susan Strasberg. That one’s called The Trip, it came out in ’67, and if you’re looking for a ‘60s flick with trippy LSD antics, it’s a must see.

Skidoo is more like a must-run-from-in-a-mad-panic-lest-an-all-too-enthusiastic-film-nerd-convinces-me-it’s-a-lost-classic. Like a sunken ship collects barnacles, a movie this bad collects cultish followers. But as much of a curiosity as Skidoo surely is, one viewing is plenty, if not one too many. Not even a handful of flippant pop tunes by Harry Nilsson saves it.

Next time I want to watch a comedy, I’ll stick to someone funnier than Preminger. Like Spielberg. Or Christopher Nolan. Or Tarkovsky.

7 responses on “Skidoo To You Too”