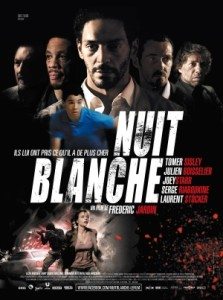 Sometimes when I hear about movies being remade, my heart sinks. Other times I use news of this sort as motivation to seek out the original film, which maybe I haven’t yet seen. Lucky for all of us, the latter is the case with the 2011 French film Nuit Blanche, or Sleepless Night as it was billed in English-speaking countries.

Deadline reported at the start of the year that Sleepless Night is being remade as a vehicle for Jamieee Foxxx and Michelle Monaghan, to be directed by one Baran Bo Odar, who is either a Swiss director getting his first Hollywood break or one of the Red Skull‘s henchmen.

(We will give him the benefit of the doubt and assume he’s with Red Skull.)

Turns out that the original picture, directed by Frédéric Jardin is pretty great in a stripped-down, adrenaline-pumping, old-school way. It’s like Get Carter, but with less Michael Caine.* 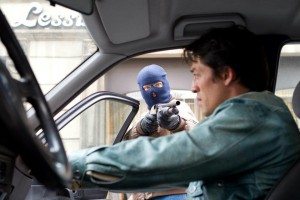 Tomer Sisley plays Vincent, a police officer lacking in moral fiber. He and his even less fibrous partner rip off a local drug trafficker, but things go pear-shaped. Vincent gets recognized, leading the wronged mobster — José Marciano (Serge Riaboukine) — to kidnap Vincent’s son as leverage with which he might retrieve his narcotics. There’s nothing too ground breaking about this set up, proving that a simple story ably executed can easily outdo the grandest of concepts.

With his son under the gun in José’s massive club — called fittingly ‘Le Tarmac’ — Vincent has to retrieve the stolen drugs and make the swap. Alas, this trade sounds less appealing to Vincent’s partner and that partner’s other, secret, confrères. 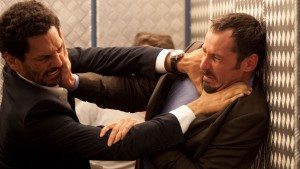 Once it gets rolling, Sleepless Night goes straight in one direction, and it goes unrelentingly. Vincent, stuck in José’s thumping, increasingly packed club, tries to save his son and stay alive — all over the course of one particularly pugilistic evening.

(The club sets, by the way, were built specifically for this film and were spread out over three countries; the things one does to secure tax breaks in an international co-production.)

As Vincent’s night comes apart, there are complications, and other characters — Lizzie Brocheré is particularly compelling as Vignali, a fresh-faced Internal Affairs agent, a role one assumes Michelle Monaghan will take — but Sleepless Night barrels along simply as a series of tense, mostly believable, punch-ups. Compare it to The Raid, except with action sequences one might imagine real men and women more or less inflicting and surviving. 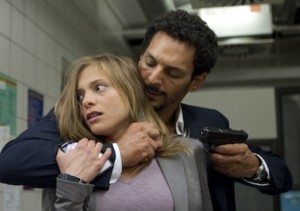 This begs the question — one I’ve been asking of (and taking heat for) lately, about Mad Max: Fury Road: is more necessarily better? It’s spectacle vs. visceral as I see it. In The Raid, and films such as its bonkers sequel, we’re watching balletic, impressive, thrilling fantasy. In Sleepless Night and its kin (which would include The Road Warrior, Die Hard, and The French Connection) we’re not sure who will survive or how, as each punch that lands? It hurts.

In this film it’s not thrills that build tension; it’s tension that adds thrills. Neither method being objectively better than the other, just clearly different and to different tastes at different times.

So if you’d care for a compact pill of tension: Sleepless Night. 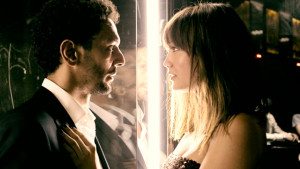 This actress’ name is Pom Klementieff and I approve.

Although I must admit that Sleepless Night does not make an overwhelming amount of sense. Just it makes enough sense. It’s the story of a hero one hopes will survive, as opposed to the type one knows will survive to finally kill the somehow resurrected villain in the final sequence by impaling him or her or it on a sharp pinnacle that has conveniently appeared.

Things go far wronger for Vincent than they go right. His problems are of his own creation and his choices so flawed as to appear as little more than flailing. He fights his way through because he must. His enemies — on every side — are likewise lacking in grand schemes and superhuman skill. They’re just gangsters with guns.

Maybe Vincent will make it through but chances look slim. I give Jamie Foxx much better odds in the remake. And probably a much larger gun, too.

* Yet another film they remade.