You couldn’t throw a rock in the ‘50s without hitting a science fiction flick. It was an incredible era for incredible movies, and by “incredible” I mean it’s hard to believe most of them were made. The Mole People? Zombies of The Stratosphere? Earth Vs. The Flying Saucers? Attack of The Crab Monsters? And here I’m barely scratching the surface. The list spirals on into the infinite.

1957 was an especially strong year for outrageous sci-fi. Lucky moviegoers were blessed with two of the best lesser known giant bug movies, Beginning of The End (giant grasshoppers) and The Deadly Mantis (giant praying mantis), both The Incredible Shrinking Man and The Amazing Colossal Man (huge oversight not to put them together in a sequel), the classic 20 Million Miles to Earth, featuring beautiful stop-motion monster work by Ray Harryhausen, and such B-movie wonders as Invasion of The Saucer Men, The Astounding She-Monster, The Mysterians (by Godzilla director, Ishiro Honda), and what I’m here to claim is the weirdest of the lot, The Monolith Monsters. 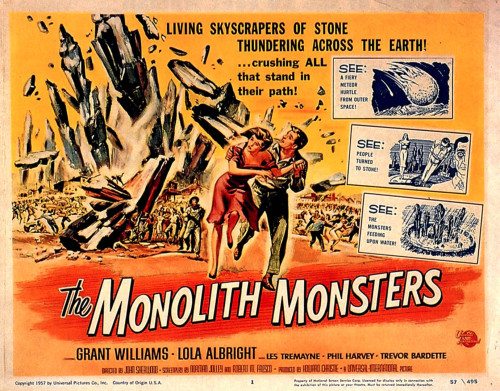 I say it’s the weirdest because the enemy isn’t a monster, an alien, a robot, a giant bug, a tiny man, a mutant, or some fantastical combination thereof. The monsters of the title are rocks. Bits of a meteor, so okay, space rocks, or, shall we say, alien space rocks. But still. Rocks. The enemy is rocks. Which in general are pretty slow-moving. I mean unless they’re rolling down a mountainside or falling out of the sky, what are they going to do? Pick a fight? They can’t even insult you, let alone knife you in the gut or punch you in the head. 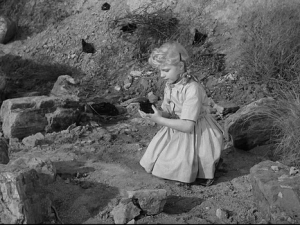 Ah, but these rocks…these rocks are special. A geologist working in the desert town of San Angela, California, comes across a number of shiny black obsidian-like chunks (or pieces of pure evil?), and brings one back to the lab to check it out. It’s awful strange, he concludes. He’s never seen anything like it. That night, in the midst of a windy storm, a flask of water is blown off a shelf and crashes down on the rock. When water hits it, it bubbles, steams—and grows!

The next morning, geologist Dave (Grant Williams, who also starred as The Incredible Shrinking Man), finds a destroyed lab full of huge black rocks, and his partner standing there dead—solid as stone.

Meanwhile, a little girl brings one of the mystery meteors home to the farm and drops it in a bucket of water. Uh oh. Next time we see the farm, it’s covered in massive black boulders. Her parents are stiff as boards, and the little girl is strangely chilled, with a hand turning into stone. 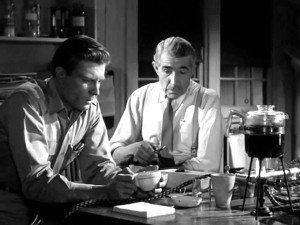 Slowly but surely, our heroes learn that the meteor is made of an impossible agglomeration of silicates. When brought into contact with water, a reaction begins. The meteorites absorb any silica they come into contact with. Silica, by the by, being in essentially everying, including people. Touch the rocks while they’re reacting, and they suck out your silica, which according to a very intelligent scientist provides you with elasticity.

Next up? You guessed it. Rainstorm. The chunks of meteor in the desert grow into massive crystal towers, crack, fall over, smash into tiny chunks, and grow into massive towers, etc. and so on, marching across the desert so long as it keeps raining, and then even once it stops. My god! They’ve discovered groundwater! I loved the special effects in this sequence, and I say that non-facetiously. The towering crystals are so strange they’re scary, and the sound effects of them crashing to earth sell their size. Another bonus: the town of San Angela is the Universal courthouse square backlot best known from Back to The Future and Gremlins (but surrounded by a matte painting of a desolate desert). 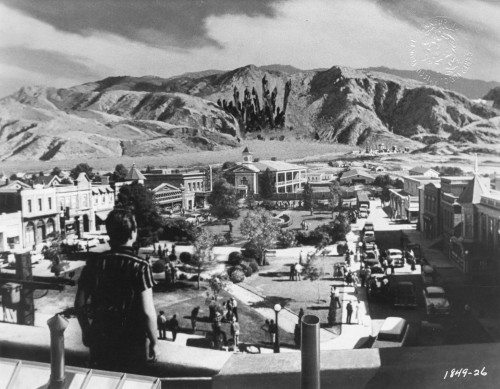 Needless to say, our heroes devise a way to stop the reaction. Lucky for we viewers, this requires blowing up a dam.

How, you ask, is more water going to solve the problem? Well, you see—

No, sorry. You don’t see. The ending makes as much sense as the premise.

For cheap ‘50s sci-fi entertainment, The Monolith Monsters is great stuff. And by great I don’t mean like genuinely great great, like Invasion of The Body Snatchers great, I mean it’s about as dumb as a one-legged chicken on a moosehunt (as they say), but in the world of dumb-great? A winner! How does it compare to the other three ‘50s sci-fi flicks I watched recently? It’s more entertaining by far than The Monster That Challenged The World, faster paced than It! The Terror From Beyond Space, although that one is the movie Dan O’Bannon borrowed the plot of Alien from, so it scores big in terms of historical interest, and it’s at least as gripping as The Incredible Shrinking Man, which is rightfully a classic, with its creative giant sets, the tarantula fight, and a surprisingly profound ending as the hero vanishes into the very quantum fabric of the universe. Thank writer Richard Matheson for that.

Alas, The Monolith Monsters doesn’t feature the greatest theme song in the history of film, which you will find in 1962’s Journey to The Seventh Planet, but come on, people—it’s got killer rocks! Coming to get you! Run! RUN!

2 responses on “The Monolith Monsters, And Other Tales of Weird ‘50s Sci-Fi”