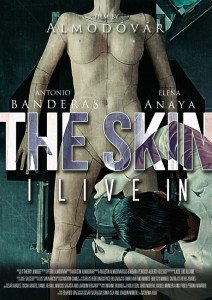 The story follows Dr. Robert Ledgard (Antonio Banderas), a surgeon whose focus is replacing the faces of burn victims. So focused is he that he’s been secretly growing super-strong human skin using cells from pig blood and, it appears, grafting it onto a pretty young woman, Vera (Elena Anaya), he keeps locked up in a bedroom in his fancy house/private clinic. She’s his only patient. Physically, she appears just fine. Mentally, not so much. Ledgard’s housekeeper asks what he plans on doing with her. She suggests the only option is to kill her. 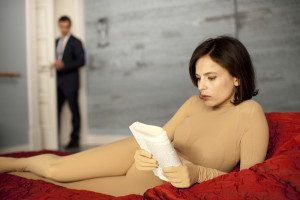 Who is this woman? What happened to her? A burn victim? Something else? The housekeeper thinks it a bad idea for Ledgard to have made Vera look so much like his deceased ex-wife. He disagrees. Viewers will surely side with the housekeeper.

Trouble brews when the housekeeper’s criminal son, Zeca, turns up dressed as a tiger and wants to hide out from the police in Ledgard’s house. The appearance of a wild man in a tiger costume reminded me I was watching an Almodóvar movie.

After 45 minutes, the story switches gears and flashes back six years to fill us in on just what went down in Ledgard’s past. 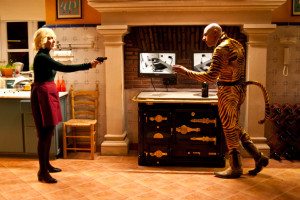 The tiger has a chat with mom

What went down is impressively fucked up. It’s not exactly in the realm of the believable, but what the hell, it’s a melodrama, a sort of soap opera from hell, so extremes are to be expected and, why not, swallowed whole. Ledgard’s wife’s demise is explained, but more important is their daughter, who’s likewise not around in the present. Her fate is the key to this demented story.

It’s hard to fathom what Almodóvar wants to say in The Skin I Live In. Something about gender identity, to be sure, but what, exactly? The movie feels more like the curious exploration of a twisted idea than it does an examination of what it means to be male or female.

Banderas gives an intense, low-key performance as the obsessed doctor. He is a man with the morals of a shark. Yet like any self-respecting villain, he’s quite sure everything he’s doing must be done, even if it involves a dungeon, chains, kidnapping, and what let’s call “elective surgeries.” 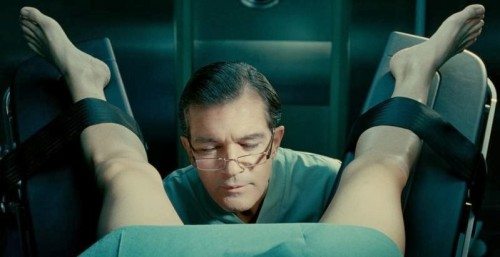 The doctor at work

Given the batshit insanity of what Ledgard does, the final scene of the movie, which I will refrain from describing at all, is emotionally jarring, as the most outrageous element of the movie is reunited with the most normal. One can’t imagine how the scene could possibly play out in the real world. And so it doesn’t play out at all. Instead Almodóvar fades to black, and we’re left to imagine how these characters could possibly deal with the horror that’s consumed them.

I’m not entirely sure whether I liked The Skin I Live In. It creeped me the fuck out, I’ll give it that, but I can’t say it makes much sense. Watch at your own risk. 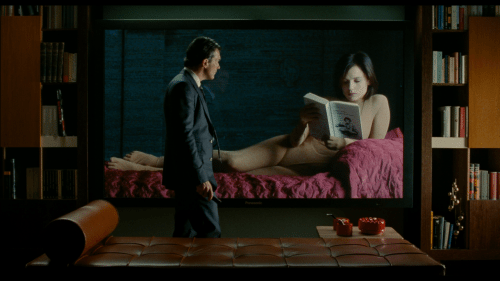 I think he likes her

2 responses on “The Skin I Live In, In Which Almodóvar Tries On Horror”