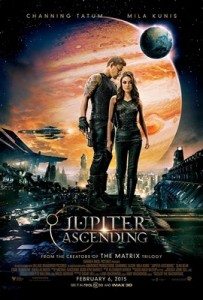 When I sat down to watch the Wachowski’s latest sci-fi explodaganza, Jupiter Ascending, it was not because I had heard good things about it. My expectations were low but frequently that’s the best state of mind in which to watch films with challenged reputations.

I vowed from the outset to find something positive to say about it, purely as an exercise in willpower. That turned out to be more difficult that I would have believed — but I have succeeded nonetheless.

I am positive that Jupiter Ascending is the shittiest possible remake of The 5th Element that does not involve a family of brine shrimp living in your esophagus. 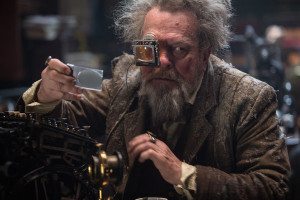 This guy was pretty good even if they didn’t tell him he wasn’t in a Terry Gilliam film until it was too late.

If you missed the critical feeding frenzy that spawned at this film’s release, and also MC Frontalot’s unflattering review on this blog, here is what you need to know: absolutely nothing. The less you know about Jupiter Ascending the better for you, and this includes anything you can do to avoid watching it in the first place. About this, I am also positive.

Mila Kunis — about whose performance in Black Swan I had positive things to say — here plays an actress attempting to wish herself out of existence. You cannot blame her, as her character, who is named Jupiter “Call me Jupe” Jones, is the foxiest toilet scrubber in all of Chicago. Jupe’s gifted astronomer father was murdered in what might be flatteringly termed the least grounded home invasion sequence since Evil Dead II. 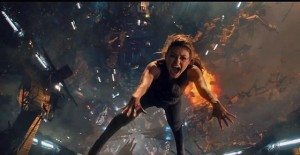 Cheer up! I’m sure you’ll find the remnants of your career down there somewhere.

Good thing Channing Tatum plays space dog marine Caine, who spends way too much time zipping around on gravity skates and blocking incessant ray gun blasts with his laser-shield instead of sniffing Jupe’s crotchal area. I guess Caine only got the roller skating bit of the dog genes?

In any case, I am positive that this is the worst performance Channing Tatum has or will ever commit to film. 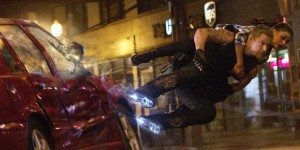 Basically, Jupiter Ascending is utter nonsense, devoid of a single human emotion, in which luchador Storm Troopers reenact The Phantom Menace by way of Hook to the kind of operatic score that suggests the Wachowski’s thought they had totally nailed it.

But staying positive… Eddie Redmayne, as the film’s alpha villain Balem Abrasax, delivers the kind of performance from which you can’t look away. It appears as if he is attempting to eat his own face. Also, if you loved the action sequences in Cloud Atlas, than you will adore the action sequences in Jupiter Ascending, as they are near identical in comprehensibility, their importance to either story or character, and ability to keep you engaged. They are different in that they go on for much longer and occur with a much higher frequency. 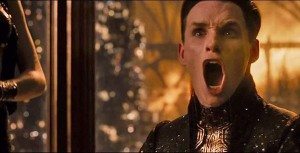 THROW ME ANOTHER GRAPE!!!

And if you have been dying to see Sean Bean act in a film in which he does not die and in which he plays a bee soldier, Jupiter Ascending might remove that last final chunk of your will to live.

In this film, Jupiter Jones does all the things you would expect a mentally challenged hedgehog to do. Occasionally she looks nice enough doing these things that you forget that Channing Tatum is dressed as Rufio and behaving like he’s caught his testicles in an immersion blender.

I thought that Jupiter Ascending might be fun to watch in an Anaconda sort of way, but it wasn’t. It was horribly, dreadfully, inescapably dull and depressing. You should not watch it and about this I am positive.

One response on “Some Positive Thoughts about Jupiter Ascending”