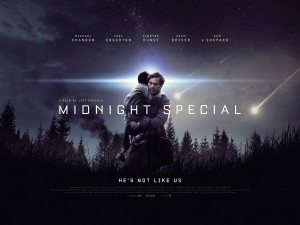 In Midnight Special, an indie-vibed throwback to the big, dreamy sci-fi of the ‘80s, an eight-year-old boy in swimming goggles, Alton, plays both Elliott and E.T. He’s a child whose mysterious powers threaten to consume him if they don’t consume everyone around him first. He’s inspired a religious following among a rural Texas cult, with his every odd saying turned into a new scripture from which a date has been pulled, and a location. The cult wants to get him there. So does his father.

The movie opens post-fatherly abduction. Roy (Michael Shannon) and a friend who’s seen the light, Lucas (Joel Edgerton), have Alton (Jaeden Lieberher) in a motel room under a sheet, the windows covered in cardboard. Seems Alton doesn’t handle daylight well. They’re on the run from the cult and the FBI, on their way to where Alton says he needs to be. No one knows what’s going to happen when he gets there. Well, aside from everyone watching the movie. 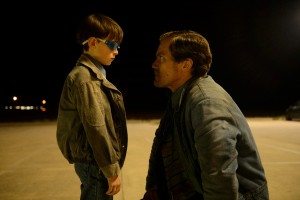 This is the third movie I’ve seen by writer/director Jeff Nichols, after Take Shelter (’11) and Mud (’12). It is, essentially, exactly the same as the other two. Nichols creates an underlying sense of dread in his movies, nothing extreme, just an unceasing ominous undertone. He doesn’t go in for much in the way of pacing. He lets the feeling of something coming power his stories, then punctuates them with occasional bursts of action. I find the results to be, at most, interesting. None of his movies are particularly satisfying. It’s as though he’s taken well-worn characters and stories and told them in a stripped down, low-key way, without adding anything new.

Midnight Special is indeed an interesting movie. It’s not boring. It’s well acted. Yet all it is is a chase, capped by an ending lacking any inventiveness or originality. It’s just the standard ending you stick on when you’re taking all of your cues from E.T., Close Encounters, Starman, etc. Which of course it’s not necessarily a bad thing to take your cues from classics or to tell an old story in a new way. The problem I’m finding with Nichols’s movies is the feeling of emptiness at their core. His style isn’t providing a new way to look at or think about these stories and characters. His style is the point. Midnight Special is interesting on the surface, but it’s all surface, all the way down. 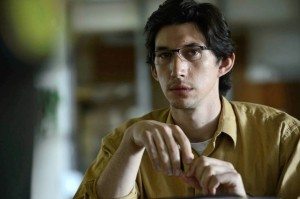 The French nerd comes to the rescue

Adam Driver plays nerdy NSA tech Paul Sevier (his French name, I presume, a nod to Francois Truffaut’s character in Close Encounters), on the trail of the boy, whose eyes radiate a blinding blue/white light whenever he’s disturbed, or when regular humans meet his gaze. Is Alton a regular human? Or is he a magical, light-based, superior alien being lost in the wrong dimension? Paul’s going to find out, by gosh.

Alton’s parents, Roy and Sarah (Kirsten Dunst), just want to do right by him, even if doing right means watching aliens whisk him away to their beautiful shopping-mall-of-the-future-world. The theme driving Midnight Special is parenthood. What it means to have a small child, to fear for him, to protect him, to lose him. But this is never examined in any way beyond the surface fact of its existing. Roy and Sarah have nothing to do in the movie but get Alton to where he’s going. They don’t doubt him, scared as they are. They facilitate him. And in the end, have they learned anything? Have we? 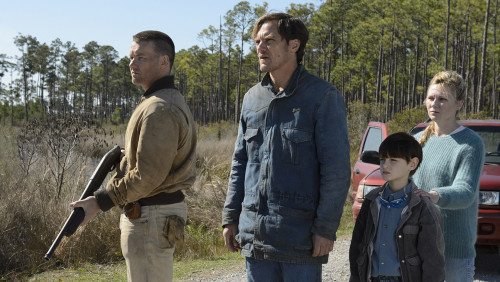 Don’t you mess with these folks

Plenty of movies don’t ask us to learn anything. With Nichols I’m not so sure. His movies are brimming with portent, with Important Lessons About Life ™. Only these lessons are never delivered. The end of Midnight Special borders on the laughable. I mean I hate to slam a movie for doing something that’s “been done,” because what hasn’t been done? But this has been done in this way with these effects and this concept of aliens so often you can’t help but say, “Really? You’re doing this again?”

Even if you’re not bothered by the familiarity of this story and everything in it, I still have to ask, what’s the point? What is this movie even about? If it’s about a child growing up and moving away from his parents, I wish I’d been given more insight—any insight—into the mindsets of the parents. Instead they look pretty shook up and stuff, while driving fast as they can from the FBI. Which is clearly a metaphor for… um…er…

I feel like I’ve left all three of Nichols’s movies with the same reaction: an impressed shrug. I like his style. I like the confidence with which he delivers it. And in the end, it does nothing for me. Maybe I should sit the next one out. 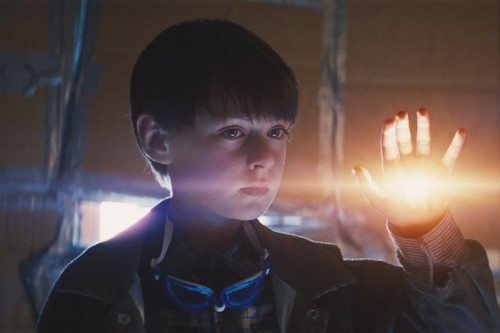 3 responses on “Midnight Special: Different Only The Same”