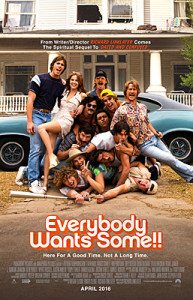 It pains me greatly to report that the man responsible for Boyhood and Dazed and Confused and even A Scanner Darkly and School of Rock could make a film as ironically flaccid as Everybody Wants Some!! Richard Linklater’s latest is— from beginning to end — unengaging, emotionally tepid, and frequently distasteful. 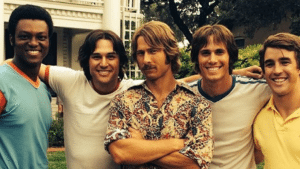 The film follows a freshman baseball player over the course of his first few days on a Texas university campus. I don’t remember the character’s name (it was Jake; Blake Jenner), or the name of any other character in Everybody Wants Some!! even though I just watched it. Not a one of them was compelling, developed, or in any other way memorable. One smoked more pot than the others. Another was marginally weirder. Many had moustaches and one was black but they were all of a kind — that kind being sex-mad, entitled jocks who too easily confuse their ability to fit words into a sentence for having something worth saying. 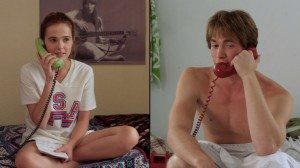 During Jake’s introduction to college life he, along with his teammates, tries to get laid and to find some direction. To both tasks he applies the level of decorum that I suppose accurately matches that of many college freshmen. In this Linklater attains honesty, if not insight.

Beyond the skirt chasing and the meanderings toward identity, the baseball players attend and throw parties, engage in competitive pastimes, and hit various clubs. There is no plot of any kind, nor any drama that ties into a greater whole. Linklater hopes we will relate to Jake’s dive into proto-adulthood but I don’t. I remember arriving at university perfectly but, since I wasn’t a baseball player, I didn’t instantly begin bonding with a gang of pre-filtered companions. For me, and I would expect for many others, going to college was, at first, vastly more disorienting and intimidating. There wasn’t an upperclassman who would give me a second look, invite me to a party, or — dare to dream — sleep with me for a period of time the length of which I’d rather not disclose.

In Everybody Wants Some!! the ‘everybody’ is ‘everybody who was star of their high school baseball team in Texas’ and all they seem to want is pussy. While Jake gets set up to woo one female character and eventually does, his infatuation with her is facile and their inevitable hookup only satisfying in the way navigating a bank’s automated phone response system is. 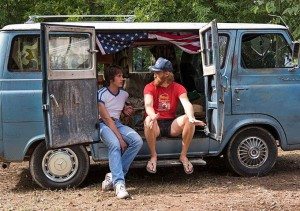 This female character (Zoey Deutch as Beverly) is, without much exaggeration, the only woman in the film who exhibits any relevant trait beyond the possession of an unoccupied reproductive system. While freshman ball players aren’t known for their deep-seated feminism, and I can dig a film that reflects this accurately, the lack of female characters whom these lunkheads even fail to notice, or to engage with — beyond admiring their bottoms — is depressing and vulgar. 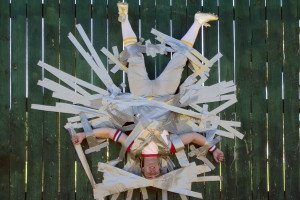 Do me a favor Fink: throw it hard.

While failing to develop a plot or to supply characters with dramatic arcs can work — as Linklater demonstrated with Slacker — here, not so much. Or at all. We get no one to care about, no event to hold our interest, and no expectation to either dread or gleefully anticipate. Everybody Wants Some!! doesn’t even bother with the beautiful or memorable cinematography that can elevate otherwise lackluster films.

This one looks ’80s. Its soundtrack — packed like that of Dazed and Confused, of which this is a ‘spiritual sequel’ — with tunes of the times also fails to lock in. It wasn’t until The Cars’ track “Let the Good Times Roll” played over the end credits that I remembered that this was supposed to be about the period of my youth. Until then, it was just any teenager’s pursuit of sex amid meaningless meandering. 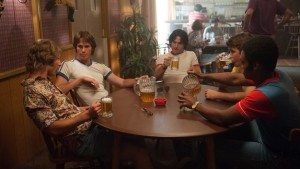 Oh hey, yeah! It’s those guys. The ones with beers.

So what was Linklater thinking? Word is that many of the film’s events reflect his own youth, so perhaps he confused his own specific nostalgia for a more general yearning. And then, maybe, he thought another dive into what it means to grow up (familiar territory for the writer/director) could carry the weight. If so, he was dreadfully, painfully wrong. Jake did not change in the slightest and without change, there is no growth.

In Boyhood, when Mason finally reaches university, we see him experience that as a whole new world. In Dazed and Confused, when Mitch gets invited to ride along with the upperclassmen, we see him struggle to find his place and prove his merit.

Jake goes in for none of that drama. He just is. And what he is is boring. Could it be that Linklater’s fatal flaw was to make himself the main character, only stripped of the flaws and quirks that make us interesting?

Are you Richard Linklater? If so, man, I’m sorry. Love your work but I hated this film.

3 responses on “Nobody Needs Any Everybody Wants Some!!”