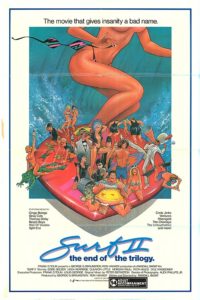 It is with great risk to life and limb one dives into the ’84 nerd/surf/punk/zombie comedy Surf II, AKA Surf II: The End of The Trilogy, for within its unknown depths there lurks neither story nor character nor anything else but pure, unadultered ‘80s teen monkeyshines, to an extent not seen since the likes of Joysticks, Hardbodies, and Zapped!. Despite, in ’84, having been the ideal age to find Surf II a work of comedy genius, I must have been too busy watching Ghostbusters on an endless loop to bother renting it, and not until a couple days ago, thanks to the Alamo Drafthouse, did I remedy this cinematic lapse (with a 35mm print, even, because god forbid one watch a film of this caliber on anything less).

I admit I found it less than a work of comedy genius. Writer/director Randall Badat’s sole directorial effort, it is said, rather mythically, that, under the influence of powerful painkillers after suffering a broken foot in a surfing accident, he wrote the screenplay over a weekend in a hallucinogenic rage at LA’s surfing culture. “Wrote” may be the wrong word. Let’s say “excreted.” It’s that kind of movie. And if you’re wondering, part of the hiliarity is that there’s no Surf I, though if ever a movie demanded a modern prequel, Surf II is it. Hey Rogen/Franco, your next movie is staring you in the face! 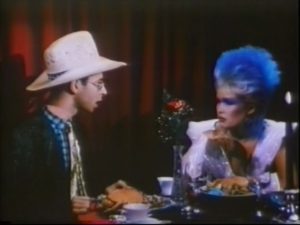 Deezen and his girl

What story there is involves loser Menlo Schwartzer (played by übernerd Eddie Deezen in what may be his greatest role) plotting to destroy all surfers by forcing them to consume industrial-waste-infused Buzzz Cola, thus turning them into gibbering zombie punks who, oh, I don’t know, gibber and whatnot. “Zombies” isn’t quite right. They don’t eat people. They eat motor oil and other beach detritus. In the movie’s second most inspired scene, science teacher Beaker slices open a presumed dead zombie punk and removes the unlikely contents of its stomach à la Jaws, including a chunk of a sunken boat, “Orca” written on its side.

Surf II’s most inspired scene? A faux-split screen kitchen in which the familes of two of the surfer kids enact identical morning rituals. The actors exactly mirror each other and speak their lines simultaneously. It’s far stranger than my description suggests. It’s kind of eerily disconcerting, only slightly less so if you figure out it’s not two scenes spliced together but a single clever set. They return to it later in the movie and give the game away, in case you didn’t catch on (and in truth they reveal it in a way notably unfunny and unclever, an opportunity lost). 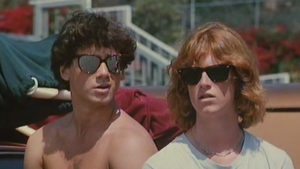 Stoltz and friend dig the scene

Eric Stoltz plays Chuck, head surfer kid, in what is essentially the same role he played in Fast Times at Ridgemont High. His job is to surf, to talk about surfing, and to ogle hot chicks, which tasks he is more or less up to. A film-ending surf-competition is oft-threatened, and I think takes place, but only in the vague way everything else happens in Surf II. Watching it I realized there’s much to be said for strictly formulaic plotting in exceedingly trashy comedies. Without a backbone holding it all together, the lame comedy turns mushy, and one’s mind wanders to such thoughts as, “Sweet Jeebus, when is this going to end?” and, “No, seriously, when?” With a formulaic plot, you know exactly where you are, and exactly when it’s going to end, giving one the peace of mind needed to endure the space between laughs, and tits. 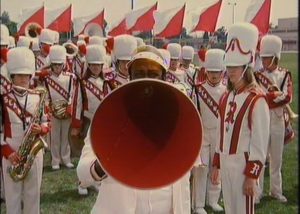 That’s Cleavon there, in a scene you might not find funny

So it’s not a work of overlooked comedy genius, but is it funny? Sometimes! There are jokes, and once in a while they land. Actual laughter results! Lyle Waggoner as police Chief “Don’t call me Chef” Boyardie gets most of the best lines. He gives the movie his all, which is more than can be said for Cleavon Little as high school principal Daddy O (a reference to ‘50s high school flick, The Blackboard Jungle? Could be, could be), who appears highly relaxed throughout. The movie is such an overall mess, it can be hard to tell where Badat is making a lousy joke, and where the lousiness of the joke is actually the intent. Is Surf II a send-up of bad ‘80s teen comedies? It might be. Sometimes it is. Most of the time it’s just a bad ‘80s teen comedy. The question you have to ask is how much credit to give it for knowing it’s bad.

I mentioned tits. Are there tits? It’s the early ‘80s, of course there are tits, though, according to Badat, not so much because of him. The producers wanted more skin, so intercut a variety of bouncing boobies into beach scenes in ways you’d find incongruous and jarring if not for the entire movie being incongruous and jarring. 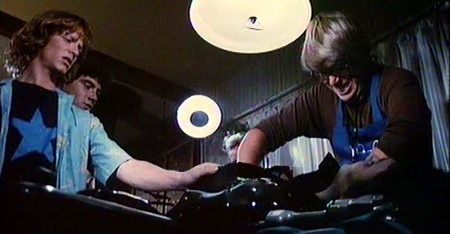 One other mild pleasure for the likes of me, songs by Oingo Boingo! Well. Two, anyway. Danny Elfman was said to be more involved until he was less involved. Wise move. Still, he left them one original song. A song never appearing on any album and never played live. Why? I guess because it’s a pretty lame Oingo Boingo song. Hey, not every song can be “Bachelor Party.”

It is, of course, a mug’s game writing about a movie like Surf II in any critical way whatsoever. This is not a work of underappreciated genius like, say, The Return of The Living Dead. It’s the kind of movie you either love like a little deformed child you keep warm in a basket under your bed, or it is not. Should you seek out Surf II? Or should you run from its dopey embrace? It is not for me to say. The answer lies within you.