It’s been years since I’ve wanted to walk out of a film. Just last week I saw a 35mm screening of the lost ’79 roller disco classic, Skatetown U.S.A., and did I consider walking out for so much as a second? I did not. It co-stars Scott Baio and Billy Barty and takes place in real time in a disco roller rink and I stayed through the credits! I was ready to bail on the Ghostbusters remake a half hour into it. I fought through the boredom and remained in my seat knowing if I wrote it up sight unseen I’d be lumped together with the anit-women-busting-ghosts troglodytes lurking in the internet’s foulest of swampy backwaters. 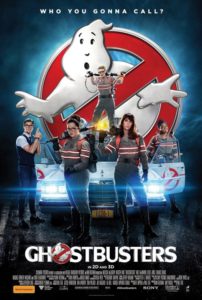 A word about those troglodytes. Could Sony have asked for a better marketing tool? Every piece about the movie—including this one—makes note of these lady-hating trolls, despite few of us having seen them in action. They poked their heads above the muck as soon as the film was announced, and ever since, up to and post-release, to utter a single suspect word about this dubious remake is to be branded a sexist beast. I can’t see how the stars of the film could be happy about this. Not about the internet trolls—they’ve been with us forever. We usually ignore them. Remember Fury Road being called out by some group of penis-wielding ass-hats for focusing on Furiosa? No? Exactly. I mean why would the stars be happy about their movie being singled out for special pleading? As if we have to treat yet another remake of a beloved classic with kid gloves lest we disturb its fragile actors. I don’t think the four women starring in Ghostbusters are fragile, and I don’t think they need special pleading.

Sony thinks otherwise. After months of hype, the movie has become a referendum on whether or not you approve of, I guess, women, just in general. A clever marketing tool indeed. Lord knows they need it. Ghostbusters is a lousy movie, I don’t care who stars in it. Without a coherent script, without a single original idea, what could we expect? All the talk of mean man-children flinging their feces in dimly lit corners of the internet is mere distraction.

Director/co-writer (with Katie Dippold) Paul Feig claimed to have a new idea for a Ghostbusters “reboot,” hence all the hubbub. Aside from recasting the busters as women, I haven’t a clue what he thinks his new idea is. This quote might clarify. He says he wanted to “tell a story you’ve seen before, but in a way you haven’t seen it.” Try to parse that one. What he’s done is tell exactly the same story we’ve seen—twice, in fact—in the the exact same way we’ve seen it. I watched Ghostbusters II for the first time since the ‘80s a few weeks ago, and lame as it is, as much of a copy of the original as it is, it’s better and funnier—much funnier—than Feig’s remake. 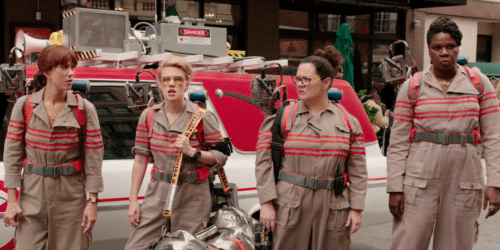 If you’ve seen the ’84 Ghostbusters—i.e. if you are a human living on planet Earth—you know what’s going to happen in the 2016 version. Three scientists of dubious legitimacy, Abby (Melissa McCarthy), Erin (Kristen Wiig), and Holtzmann (Kate McKinnon), team up with a street-smart fourth, Patty (Leslie Jones) to save New York from the ghosts suddenly appearing all over town.

One of the great pleasures of the original was watching this crazy story unfold. It was all so new and weird and wonderful! These three nuts and their proton packs trapping ghosts and trashing the city. We discovered what “ghostbusting” meant along with the characters. Anything could happen. In the remake, the only things that happen are what we saw happen the first time around, and the second time around, and in every other of a hundred times around in every other Ghostbusters iteration of the past 30 years. 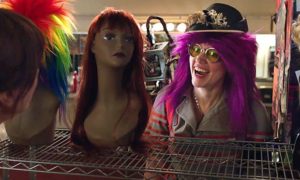 The script is a structural mess. The first hour of the movie walks us step by poorly paced step through the paces of the original movie. Nothing surprising or new happens. It’s like watching a Superman movie and spending an hour learning how he came to Earth. WE KNOW. The scientists meet. There is a ghost sighting. They investigate. They see the ghost. They would like to see more ghosts. They would like to trap the ghosts. They will need big ghost-weapons to capture them. They make the weapons. They must learn how to use them. A ghost is trapped. And so on. A big problem with this kind of “reboot,” where it’s the same movie with certain elements slightly altered, is that there’s a reason it worked the way it worked the first time: The creators thought long and hard about how best to tell the story. When you force yourself to tweak an elegantly functional story, your tweaks are all but guaranteed to make matters worse. Feig and Dippold put themselves in the position of saying, quite literally, “It worked perfectly to have X happen in the first movie, but let’s change it to Y in ours.”

Unlike in the original, there are no characters corresponding to nerdy sadsack Louis and the neighbor he lusts for, Dana, characters instrumental to the story’s structure. I’ve seen it claimed in recent days that the original is a loosely written movie featuring some SNL vets cracking wise against a backdrop of special effects. This is a terrible misunderstanding of the movie and how it works. The script is beautifully structured. It’s this careful craftsmanship that allows for the riffing of Bill Murray and Rick Moranis, et al. 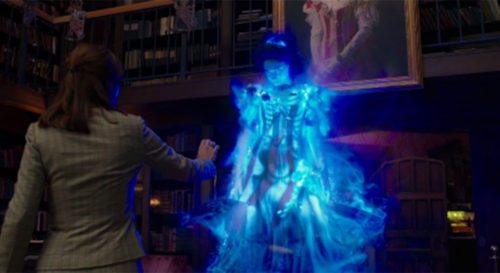 Feig and Dippold make comedies the way modern comedies are made: a loose story is conceived, funny actors improvise a bunch of gags, and the movie is made in the editing room. The first hour of their Ghostbusters is dead in the water. There’s no forward momentum. We get fart jokes and shit jokes and I’m not sure what else. The characters are too vague to be funny. The actors are fine, but they’re given so little in the way of definition. No one has any drive beyond “Hey, ghosts are neat, let’s get ‘em!” The original had a love triangle at its core. Not often put that way, but there it is. That’s why Louis is such a great and important character. He gets what he wants, but only after he and Dana are taken over by demons. Venkman has to save the city to get back his girl.

In the remake, the busters do what they do because there are ghosts, and ghosts need busting, yes indeedy.

The antagonist is a surly nerdy weirdo, Rowan. As played by Neil Casey, he’s compelling at first, then lapses into irrelevancy as his spirit is whisked into the body of Kevin (Chris Hemsworth), who is, ha ha, a dumb guy. Get it? Because he has muscles? If you think this is funny, you’re in luck, because it’s the one joke he plays in every scene. When he embodies the bad guy in the end, you may find yourself saying, “So, wait, Kevin’s the bad guy now? Should I be laughing or napping?” Turns out it’s a bad call to drop the antagonist you’ve been, however poorly, building up to and replacing him with someone else. 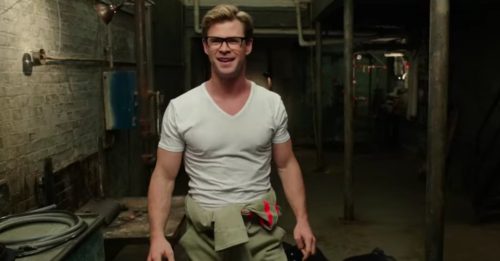 Rowan doesn’t stick with Kevin for long. Long enough for Kevin to, with a wave of his hand, put to sleep the entire army, the mayor, and all bystanders—everyone except the four people with proton packs and the ability to stop him.

Stop him doing what, you ask? Hm. Take over the world or something? The movie cares not a lick for his evil plan. In short, he’s like Vigo The Carpathian, but meek and boring and lacking any compelling history.

The movie throws in a mayor, played by Andy Garcia, who has the funniest line in the movie, “Don’t ever compare me to the Jaws mayor!” When in doubt, make a knowing movie reference. Always good a for laugh, and in this desert, I don’t say that facetiously. Feig makes the odd choice of having the mayor know all about the ghost problem. They’ve even got a pair of Homeland Security guys on the job. He’d like the ghostbusters to admit their ghost-trapping is a hoax, so as not to alarm the public. This angle is so dramatically dull, it figures into the story not at all. There is no Dickless in this Ghostbusters. No Dickless, and a mayor who knows ghosts must be stopped, so what exactly are the ghostbusters pushing up against? Turns out, nothing. Just ghosts. 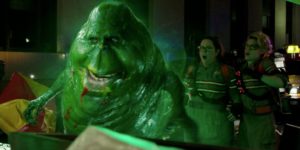 You knew Slimer would return.

Most of the ghosts don’t look any more interesting than they did in the first two movies. Shinier, sparklier, their CGI fancier. Neatest looking are a parade of ghost-balloons slowly chasing our heroes. Why the ghosts choose to mimic parade balloons one can pop with a knife is not explained. The final baddie is a giant-sized, evil incarnation of the ghost in the busters’ logo. It looks cool enough, and dies easy enough. It may be hard to remember this far removed, but the revelation of the Stay Puft marshmallow man is one of the most glorious reveals in the history of cinema. No one saw it coming. Or anything like it. Repeating it is boring. Now we’re merely waiting for the big white ghost to arrive. They might as well have thrown in a Death Star for good measure.

There are cameos by the old cast. They are as unimaginative as everything else. Each plays as a time-out from the movie. “Hey! Look who it is! Give ’em a big hand folks!” It’s like watching a cavalcade of stars on an old TV variety show. Sigourney Weaver doesn’t even make it into the actual movie. She shows up mid-credits sequence. Speaking of which, I waited around to watch the now required post-credits tag (thanks, Marvel), so you don’t have to. (SPOILER time, that’s right): The busters receive a strange transmission from someone named—wait for it—Zuul. So the sequel to the remake is poised to itself be a remake of the parts of the original they didn’t remake this time. My god—time is a circle! A horrible worm, feasting on its own tail, for ALL ETERNITY!

One wants to rail against the unimaginative waste this movie represents, but I fear doing so plays into the hands of the apologists. The original Ghostbusters is hardly sacrosanct. But it is a wonderful, creative, smart, funny movie in no need of being replaced. With so little in the way of fresh ideas, it’s hard to see the remake as anything but Hollywood SOP: give ‘em what they already have, again and again and again, until they run out of money or drop dead of ennui. 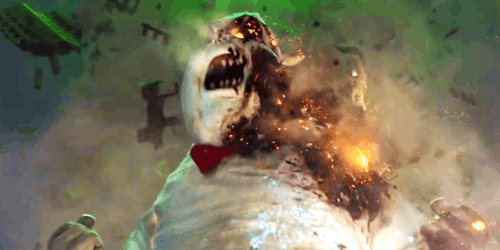 What? A giant white ghost monster? No way!