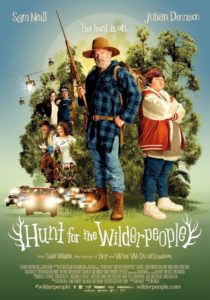 Relative newcomer Julian Dennison plays Ricky Baker, an overweight, hip hop-inflected, delinquent foster kid. He is dropped upon us — and his new foster mom — by Paula, a rancid child-welfare officer (Rachel House), who salaciously relates his misdeeds in a litany soaked in schadenfreude.

The accompanying montage that shows Ricky acting out is a rabbit punch of comic wrong. 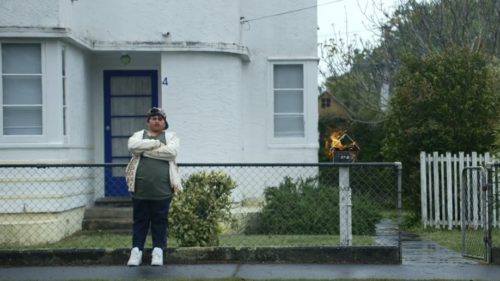 Ricky Baker, see, he’s a bad egg but clearly only because Ricky Baker has never known love. Somehow, improbably, Taiki Waititi conveys this through shots of the boy spray painting walls and spitting off a bridge.

You can see he’s not so wicked; just lost. This is sad, and funny, and true. Julian Dennison enacts these traits — and everything else — adeptly. 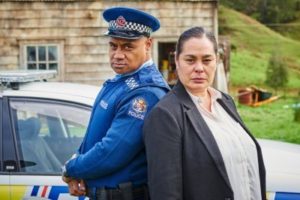 Yes, he’s a rotund little pill bug with a cherubic face and all the grace of a drunk Kodiak bear. And you’ll likely laugh at him a bit — but only marginally because he’s overweight; the rest will be because he follows trippingly in the footsteps of giants such as Oliver Hardy, John Belushi, John Candy, and Chris Farley.

Those were all men who knew how to make physicality work for them. It’s reductive to say ‘fat is funny’ when it is clearly neither funny nor unfunny. It’s just a common body type. If you want proof, try to find Chris Christie amusing and report back to us.

Being funny takes talent and that’s what Julian Dennison has. Young talent, maybe, but talent nonetheless.

Hunt for the Wilderpeople sidles through its first act. In this Ricky gets reluctantly domesticated by Bella (Rima Te Wiata), a foster-mother overflowing with odd affection. She isn’t quirky, and neither is the film. Quirky means being deliberately oddball in order to produce an attractive or alienating effect, like much of Wes Anderson‘s work. Waititi’s film (which he also wrote, based on the book by Kiwi literary comic Barry Crump) is odd only because that’s as beautiful and sad as you are.

While oddity gets accentuated for comic effect, increasingly towards the climax even, it never becomes an act or a manipulation. Ricky Baker and Hec — that’s Hector (Sam Neill), Bella’s half-tamed husband — both feel implausible but not unbelievable. And Neill is fantastic; it’s my favorite role of his since the brilliant Dean Spanley.

Sam Neill plays Hec as sweetness swaddled under gruff, as if Hagrid was penned by John Steinbeck. Circumstances conspire such that Hec and Ricky go outlaw and become the ‘wilderpeople’ of the title. And then, until it ends, the film hangs a little character growth and a lot of trailing humor on the pair’s travails. 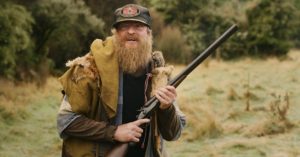 Somewhere along the way Rhys Darby (of Flight of the Conchords and What We Do in the Shadows) makes an appearance as Psycho Sam. It’s not a subtle role, and it may cross over into quirk, but it is funny.

Hunt for the Wilderpeople runs up and down the glorious mountains of New Zealand, making much of the scenery and the local cast — standouts include Tioreore Ngatai-Melbourne as Tahu and Troy Kingi as TK. As it runs, it gets chased, mostly by what must be New Zealand’s entire police force as goaded on by Paula. She insists ‘no child be left behind’ but she means it in the way your mother does when she forces you to finish your lima beans. Paula is, by her own account, like the Terminator.

Which makes you Sarah Connor, and before she started doing chin ups and got all buff.

Hunt for the Wilderpeople is not a film that works perfectly, and it’s not a film where everything works out perfectly, but that’s perfectly fine. It’s our imperfections that makes us interesting. And which prove we weren’t made by committee or to boost tie-in sales or to revitalize a franchise for people who think 3.5 years is the extent of human memory.

But go ahead. I know you’ll see Ghostbusters instead anyway, even though your money and time are clearly better spent with Ricky Baker. Taika Waititi’s next film will be Thor: Ragnarok. I’m sure you’ll see that in the theaters, but I doubt it will be as good as this one.