By 1970, Steve McQueen was one of the biggest movie stars in the world. He was a leading man throughout the 1960’s in films like The Thomas Crown Affair, The Sand Pebbles and The Cincinnati Kid. But ask anyone on the street to name a McQueen film, and nine out of ten will say Bullitt.

They will. It’s science. Don’t argue with science.

A well-made cop drama, Bullitt is best known for a nearly eleven-minute car chase throughout San Francisco. It’s an iconic scene, revolutionary for the time, and one that has influenced the action film genre ever since.

So if Steve McQueen racing around in a 1968 Ford Mustang in a single chase scene is great, then a whole film built around McQueen, fast cars, and racing should be mind-blowingly awesome, right?

While science might suggest so, in this case science is wrong. Le Mans proves it.

McQueen, a racing enthusiast, decided, in 1970, to make a movie about the 24-hour endurance race that takes place annually at the Le Mans circuit in France. It wasn’t the worst idea. Grand Prix, another racing film, and one which McQueen turned down the starring role in, had been a big hit a few years before. It picked up three Academy Awards.

Grand Prix however had John Frankenheimer in the director’s chair, and James Garner, Toshiro Mifune, Yves Montand, and Eva Marie Saint in front of the camera. Le Mans had… well, Steve McQueen. And some European actors. And a lot of cars.

Le Mans as a movie concept is a great idea. Based around a single race rather than a season-long competition, it should have allowed plenty of time to get in some rich characterization and plot depth. Instead it’s as dull as dishwater.

This is what happens when you spill hot coffee while driving.

Don’t believe me? OK, then. Please allow me to dissect what passes for plot of Le Mans.

Steve McQueen plays race car driver Michael Delaney. The previous year at Le Mans he was in a wreck with another driver, and the other driver died. Delaney is haunted by this? Sad? Angry? It’s hard to say, as McQueen’s expression rarely changes from one of intense concentration or, maybe, concentrated intensity.

Lisa Belgetti (Elga Andersen), the widow of the driver Delaney killed, shows up looking wan and pretty and oh-so-’70s. Seriously, if you like your mascara thick and dark, you’re in luck. Delaney avoids her at first. He’s probably wondering how long a mourning period lasts in Europe, and if it’s too soon to make a move on her. One of her husband’s old teammates evidently thinks a year has been long enough, though, because he asks her if she wants coffee.

And he has that look. You know the one. The one that says “coffee” means “sex.”

Lose yourself in those eyes. And then climb back out using the mascara as a ladder.

Lisa knows that look and gives him the brush-off. Poor race car driver probably went off and consoled himself with a bevy of groupies and a few bottles of Dom Perignon. That he opened with a platinum corkscrew.

Another racer, one of Delaney’s teammates, tells his wife he’s going to quit after this race. That line of dialogue makes him the most well-developed character in the movie. Having a single defining trait puts him well ahead of everyone else in terms of characterization.

There’s a lot of this in the movie. A lot.

As the film unspools, the race becomes a fight between the Ferrari team and the Porsches. A Ferrari skids on the damp track, and a second Ferrari has a spectacular crash seconds later. Then Delaney loses control and crashes out of the race as well. This is so important that it’s shown the first time, as it happens, and then again as Delaney relives it in slow-motion.

Out of the race, Delaney spends his time with the widow Belgetti.

When one of the other Porsches is brought in for repairs, the team manager switches out drivers. The driver who wanted to quit gets an early retirement so that Delaney can drive. Which, sure, he’s the star of the film, but he’s also the guy who keeps wrecking his car every year. I wouldn’t trust him with a used Yugo, much less a Porsche 917.

Delaney holds off the Ferrari, allowing yet another Porsche to win and that’s the climax. Delaney gives a two-fingered salute to the Ferrari driver, then he and the widow Belgetti give each other knowing looks. The kind of looks that lead to “coffee,” if you know what I mean.

I mean I need a cup of coffee if I’m going to keep writing about Le Mans.

The grandeur! The pageantry!

Did I mention that the first lines of actual character dialogue aren’t spoken until over 30 minutes into the film? For all the complaints leveled at modern blockbusters for putting spectacle ahead of story, the phenomenon isn’t new. Le Mans is all glitz, albeit remarkably-produced practical effect-based glitz, and no substance.

Le Mans was not a commercial or critical success when it was released in 1971. It’s almost a film that plays better now, in the wake of the Transformers and Pacific Rim and other movies that put visual spectacle ahead of storytelling. But that doesn’t make it good. Grand Prix is melodramatic, but it tells an actual story, even if that story plays out like a soap opera. Rush may take a few liberties with history, but it’s nonetheless a solid film that gives the characters actual motivations and emotional impetus. Talladega Nights: The Ballad of Ricky Bobby has Will Ferrell wrestling a cougar and winning a race driving backwards. 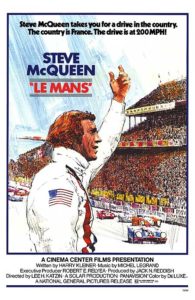 Taxi! Take me to the finish line.

Bullitt was a good cop film with a great chase scene. Le Mans is a bad film with some great racing scenes which is unfortunate, as the actual Le Mans event is a unique race that runs several different classes of cars simultaneously. You would never know that from the film, though, as none of this is ever explained. The movie was made by a gearhead, for gearheads, with nary a thought that just maybe the rest of the audience would like a peek at what makes racing so cool.

5 responses on “Le Mans: All Action and No Story”