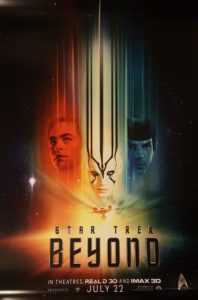 The good news: Star Trek Beyond is not the viciously insulting piece of garbage that J.J. Abrams’s Into Darkness is. The bad news: it’s incoherent and boring and, for the third time running, feels only tangentially related to anything Trek-like.

Credit Simon Pegg, who co-wrote the script with Doug Jung, with giving it a modicum of wit and not insulting long-time fans of all things Trek. At least Pegg is a true fan. You can almost sense a real Star Trek movie lurking behind the drab shrub that is Beyond, but alas, it daren’t show its face, lest the studio feel unable to market it to worldwide audiences.

The smartest move Pegg and Jung make is—call them crazy—allowing the key players to interact with one another. For the first time in three movies, we get multiple scenes with Spock (Zachary Quinto, increasingly uninspired) and Bones (Karl Urban, still killing it) alternately sparring/bonding, a few with Kirk (Chris Pine, pretty good, if a bit bland) and Chekov (Anton Yelchin, charming as ever—goddamnit, I mean of all the people—sigh…) running about comically, and plenty of witty antics from Scotty (Pegg, always a pleasure—who would have guessed Scotty would get so much screen-time this outing?).

Buddy comedy in the making.

Problem is, all of these would-be pleasant character interactions come in the midst of this non-stop action sequence of a movie. It opens with a cute scene, Kirk being jumped by snarly foot-high beasts while trying to broker a peace settlement, then lapses briefly into the “character defining” portion of the film, required for all big budget movies, lest we for a single second not know which childhood traumas are afflicting our heroes. In this case, Kirk is bored, three years in, of being a starship captain—not like his awesome, space-loving dad! Why? Hush, child. All starship captains do is fly around to crazy planets and interact with weird aliens and save civilizations and YAWN. I bet you can’t think of a single thing more boring than that! Kirk sure can’t. He wants to live on a space station and be a vice admiral, which OF COURSE sounds way more exciting, am I right?

But before he can begin his thrill-a-minute new desk-job, Kirk and the crew are assigned to explore a mystery planet, Altamid, a creepy alien lady claims her ship crashed on. No sooner do they arrive then whammo! A million billion little attack ships blow the Enterprise into tiny bits, kill hundreds of its crew, and strand the key players on the planet below. This attack sequence lasts forfuckingever. It is the epitome of boring CGI action bullshit. The movie’s barely started and they crank it to 11, fill the screen with so much shit you haven’t a clue what anything looks like or where anyone is. It’s just BOOM! SMASH! RUN! SHOOT! All you can do is wait it out and hope by the time the next giant explodey sequence rolls around you’ve been given a reason to care.

Just look at all of those…things you can’t see.

Well. As my dear grandpappy used to say, hope in one hand and spit in the other and see which one fills up faster. You will not be given a reason to care. Once our heroes hit the planet surface, I was prepared for the movie to settle in a bit, slow down, allow for a little exploration, both of the planet and whatever lives on it, and of our heroes. We get neither. Instead the action just goes on and on. They hit the planet and keep running and shooting and yelling. They find the saucer portion of the stricken Enterprise and it’s another action sequence all over again until it blows up AGAIN. How many pieces can this starship be reduced to?

Director Justin Lin has directed numerous Fast & Furious flicks. He certainly brings a manic sense of pacing to Beyond. What he doesn’t bring is coherence. The camera shoots from every possible angle in every sequence. Nothing flows. Visually, these scenes couldn’t be more muddled. The concept of a million single-occupancy death-ships swarming like bees might sound cool on paper, but onscreen it reads as tiny dots racing around with a million other tiny dots. When the MacGuffin is revealed to emit a life-dissolving swarm of still more tiny dots, you have to assume nobody cared about this stuff. “It’s just the MacGuffin, it doesn’t matter what it does or what it looks like,” you imagine Lin saying. 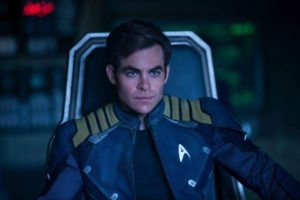 I am of the opinion that MacGuffins oughtn’t call attention to the fact that they’re MacGuffins. If, truly, the one in your movie doesn’t matter, you’d better do what you’re supposed to do: make your movie about your characters. In Beyond, the MacGuffin does nothing but yell “Hey everybody! Look at me! I’m the MacGuffin! What I can do and why I can do it and where I’ve been and why will never be explained, yet nothing in the movie will matter but MEEEEE!”

The MacGuffin is an artifact the Enterprise has on hand from the opening scene. We learn it was long, long ago attached to another artifact, and that both pieces were sent floating into space to rid Altamid of their deadly power. The bad guy on Altamid, Krall (Idris Elba), has one piece in hand, and, with access to Federation computers, learns the Enterprise has the other half. It’s Krall who lures the ship to Altamid.

Who is Krall? That’s a spoiler, my friends. Read further at your own risk. 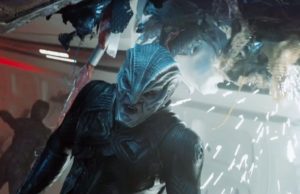 Someone’s having a bad day.

So. Krall, still upset at how peace ruined his life, will now kill everyone in the universe with the reconstituted MacGuffinerizer.

Why should we care about this? I don’t know. At its best, Star Trek was about moral dilemmas. The characters had to make choices. But choices are only interesting if they’re hard. Is it a hard choice to stop Krall? Why would anyone feel any sympathy for him? He’s just a bitter, insane, war-crazed killer. Now imagine his grudge against the Federation were relatable. What if his desire to destroy the Federation was in order to save his own people from destruction? What if he was the ruler of a distant outpost planet, and for whatever reason, the Federation’s arrival in the form of Kirk and the Enterprise marked the end of his ancient culture and its peoples? Should they be sacrificed for the greater good? What if to prevent assimilation, Krall fought back? Should Kirk still stop him? That would be a hard choice. Or if not hard, it would at least have moral implications worth considering. 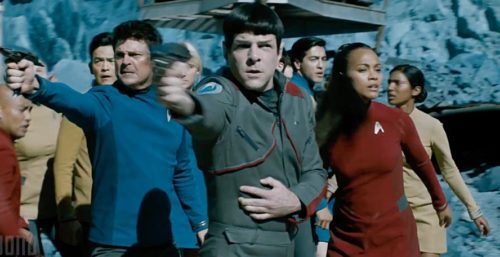 There is nothing to consider in Beyond, and no time to consider it. There is an alien/old captain we barely know who wants to kill all life, and Kirk et al would prefer that he didn’t. BOOM! CRASH! ZAP! HE’S GETTING AWAY! RUN!

You might expect at least one tense, drama-filled scene between Kirk and Krall. Not in this movie. Krall plays like an afterthought. He’s as much a MacGuffin as the MacGuffin. There’s no time for a dramatic scene. Too much action to race through. Lin’s pacing contains no pauses. It’s one speed from start to finish. It is very, very boring. 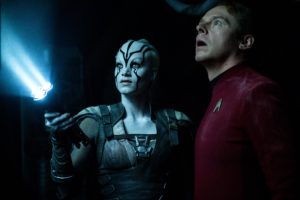 Look at those two cuties.

Did I mention the wit? There is some wit, some chuckle-worthy lines. Karl Urban continues to be the stand-out performer. Pegg, too, is no dummy. He gives himself the best lines. Sofia Boutella plays another alien stranded on Altamid, Jaylah. She hangs out with Scotty and shows him Krall’s old, crashed starship (which they repair and launch, despite the ship being built to function only in space. And why not? The Enterprise itself dashed about underwater in the last movie. There are no rules in this universe.). I see a future romantic entanglement between Scotty and Jaylah. Spin-off comedy, perhaps? A Pegg/Edgar Wright production? If Star Wars can have one-off movies, why not Star Trek? You read it here first.

The funniest scene in Beyond comes at the end. Shown in time-lapse, a new Enterprise is built, the NCC-1701-A. Same as the end of Star Trek IV. I laughed because this is the third new Trek movie in a row that ends with the suggestion that now, finally, this crew and their starship may begin cruising the universe and having adventures. I’m not holding my breath.

2 responses on “Star Trek Beyond: Who Mourns For A Story?”