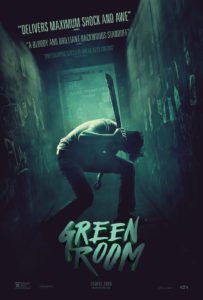 Green Room — Jeremy Saulnier’s follow-up to Blue Ruin — begins with a deliberate call-out to The Shining‘s credit sequence: a smooth overhead helicopter shot of a car winding down a forested road. In Kubrick’s horror classic, the Torrence family heads to the Overlook Hotel so that they might commingle with the resort’s spectral residents — inside their own heads and then, most clearly, out of their heads.

It is hardcore in a way that pushes you close to a recognizable edge, dares you to step across, and then, when you wisely refuse, shoves you over anyway.

I enjoyed it from start to finish, even when it made me recoil in disgust.

While I’d previously heard that Green Room‘s smart set-up lost steam in its inevitable conclusion, that wasn’t my experience. Saulnier’s script may not re-invent the conventions of horror or the thriller, but it does pace them out with ample style and uncommon heart. Part of that is an ending that doesn’t involve a killer springing back from the dead so he/she/it can be impaled on a conveniently located spike-like object. 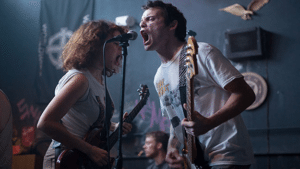 Anton Yelchin — he who recently, tragically died in a freak auto accident — plays Pat, bassist for the Ain’t Right, a low profile punk band on tour in the Pacific Northwest. The quartet (including Alia Shawkat as Sam; Joe Cole as Reece; and Callum Turner as Tiger) do as punks do — and not movie punks, but real punks. They syphon gas, drink piss beer, scream into microphones, and sleep in their van even when they happen to be at the wheel of it as it gargles down the highway.

Life for the Ain’t Right isn’t precious. They spend their uncherished portion of it freely and without caution. This they will come to regret.

Circumstances place them in a gig at a remote roadhouse run by neo-Nazis. There they accidentally witness a murder and wouldn’t you know it, they are cordially invited to stay by the owner, Darcy (Patrick Stewart). 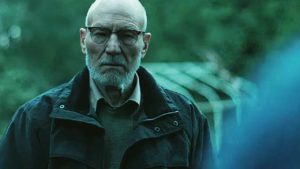 Green Room‘s premise — a group trapped by villains, or monsters, or psychic forces in a cabin / flotilla of rafts / terrible script — isn’t innovative. The way our unfortunate protagonists play their hand out may be often enough brutal, or cute, or unexpected, but it isn’t anything that will change your world. What Saulnier — and Yelchin, and Shawkat, and Imogen Poots as Amber, another captive witness — do bring to this well-stomped ground is a surprising amount of recognizable humanity.

What does one do when locked in a room by men who — so sorry — kind of need you to die with all expedience?

Picturing this situation, you’re apt to go full John McClane, as if Die Hard could ever actually occur. Take that fantasy and bin it. Instead recall the end of Into the Wild, where Christopher McCandless finds himself on the wrong side of a raging Alaskan river having accidentally poisoned himself; a real man, with a real problem, and no solution in sight.

Not to spoil that earlier film, but McCandless dies. So, too, will many in Green Room. Here, there’s no grand plan in anyone’s head. As one of the characters says, “It’s not a conspiracy; it’s a clusterfuck.”

This is too often how it goes. We can blame violence on terrorism or whatever else but most often things just go wrong. Then, as smart as we are, we make them exponentially wronger.

So yes: Jeremy Saulnier knows how to make his characters move and talk and react like actual, three-dimensional, brain-functional humans. There are no archetypes here; no psycho Nazis, no plucky heroines, no unlikely saviors. There are four not very smart punk musicians, a woman they don’t know, and a lot of young men seeking to prove themselves through violence. 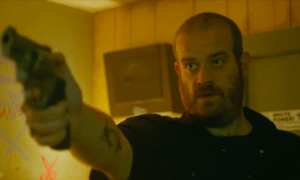 The way Green Room is shot and edited, it is not difficult to see inside these men and women — particularly as they’re frequently cut open. While you’re likely intrigued by Patrick Stewart’s turn as a Nazi, his part is one of the film’s least engaging. Eric Edelstein as Big Justin, for example, brings far more to the film, as does one of the picture’s many pit bulls in particular .

There are moments in Green Room that tend too strongly towards Tarantino (it’s closing lines, for example), but that’s not what I’ll remember of the experience. I’ll remember Pat’s arm rent asunder and his face as he takes it in. I’ll remember feedback, and “Nazi Punks Fuck Off“, and the subtlety of the sound design. I’ll remember being young, and feeling invulnerable, and the resin of those times which still gums up my joints.

And I hope to remember to avoid being killed by neo-Nazis, attack dogs, box cutters, or red laces. But, looking at the way the world is these days, I have to ask myself: do I feel lucky?

Well, do you punk?