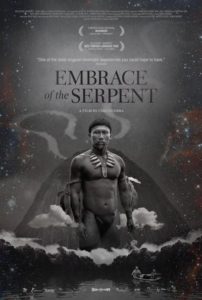 I didn’t see the highly-lauded Embrace of the Serpent when it was in theaters. I didn’t go, even though many critics I respect tried to wiggle up behind the picture for a slow dance. I didn’t see it after the pair of local film nerds, seated at the table next to mine at an Italian joint, spent most of their meal gushing about it.

Instead, I asked Netflix to send me the film on Blu-ray. And then I let it sit next to my television, unbothered, for more than two months. To ripen with age. To build up a lustrous patina and a more-than-fine coating of dog hair and infant fingerprints.

What can I say? Embrace of the Serpent — a black & white tale interweaving legend and historical fiction in the Colombian Amazon — is the sort of film you’re supposed to want to see, but for which I find it hard to build enthusiasm.

Films such as Suicide Squad may be near-bottomless mind-holes filled with ant-flavored pudding, but I can motivate to see them — and in theaters even. They look like dumb fun. They are dumb fun, with perhaps a modicum too much emphasis on the dumbness.

Dumb fun is an important element of our lives, particularly for those of us who tend to young sprogs with limitless energy and an uncanny ability to repeat the word ‘apple’ ad infinitum until space and time cease to cohere. 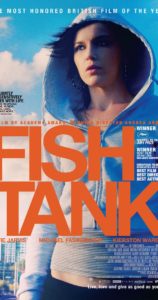 Have you seen this film?

My Netflix queue is filled to overflowing with films that I’ve been meaning to watch for years. They are films that I suspect, and have been told repeatedly by trusted sources, will be great. They include: Omar, Blue is the Warmest Color, Fish Tank, Belle de Jour, etc. etc. etc.

Have I watched them? No. Not yet. Instead I’m watching season 4 of The Americans. I binged Stranger Things (which has a great first half season and then a less impressive but still enjoyable second). I’m running behind on Mr. Robot‘s so-far-lackluster second season. When I do find the time and energy to put a film on, it’s either one I am assured will be completely and utterly devoid of thought-prospects (Blackhat) and that I can watch in 15-minute installments over a week, or one I’m revisiting out of love and the need for comfort (The Sting, No Country for Old Men).

But I finally watched Embrace of the Serpent, more out of guilt and responsibility than out of desire. 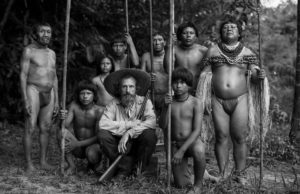 It was okay, I guess. I mean: sure. It was a good movie. Its cinematography had moments, even if many of its black & white landscapes became chaotic with contrast. Its story — in which two Anglos, thirty years apart, travel with the same shaman, the last of his people — wanders in and out of deep cultural waters. What does colonization look like? What is culture when it is lost? Can we heal ourselves, mayhaps through dreams?

Writer/director Ciro Guerra culls intense moments from this semi-Fitzcaraldo, semi-Dead Man travelogue. He unveils ugliness and beauty in surprising locales. But — baby-tired, maybe — I felt it land not quite as squarely as poor, insane Mel Gibson’s underrated Apocalypto. To pick nits, there weren’t enough nits in Embrace of the Serpent. Instead of feeling like I’d been transplanted into the breathing Amazon, its lack of insects, and fauna, and sweat, and shadow made me feel like I’d only been leaning into the wind of an Amazonian-tinged dream.

This is and was acceptable. 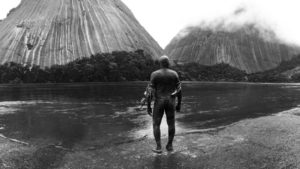 Embrace of the Serpent is a good film. Sequences in it — such as both iterations of the jungle mission — may noodle around in my head for some time, perhaps deepening channels cut by earlier films. But I cannot really enthuse about it.

Every year there are critical darlings. One sees lists, such as the one the BBC recently released naming the best films of the 21st century and has to wonder — did that many people really love There Will Be Blood? Holy Motors? Or is it simply a matter of attempting to discern anything of value amid a wash of superhero fantasies and dick jokes.

Every year there needs to be Best Films and buzz and pieces of cinema to enthuse over. This year Embrace of the Serpent was one of them, just as in years past it was Beasts of the Southern Wild or The Skeleton Twins or Beasts of No Nation.

I suppose we’ll see in ten years which of those were worth remembering.

One response on “Embrace of the Serpent and Other Critical Darlings”